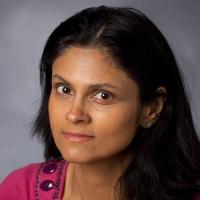 Dr. Ramanujam is the Robert W. Carr Professor of Engineering and Professor of Cancer Pharmacology and Global Health at Duke University and co-program leader of the Radiation Oncology and Imaging Program (ROIP) at the Duke Cancer Institute. She founded the Center for Global Women’s Health Technologies (GWHT) in 2013 where she empowers trainees to create impactful solutions to improve the lives of women and girls globally. This center, since inception, has catalyzed new research activities and the development and commercialization of several technologies that advance prevention and treatment of cervical and breast cancer.

Dr. Ramanujam’s work has led to low-cost and efficient health care and home-based technology innovations that provide surveillance of cancer and its recurrence. To complement her translational efforts, Dr. Ramanujam’s work exploits the dynamic changes in tumor metabolism that allow cancers to go under the radar and recur in a stealth mode when conditions are favorable. She is also creating a liquid-based ablative therapy with dual roles - (1) to address the pressing issue of cancer control in environments where access to surgery is scarce, and (2) enhance tumor kill through a combination of necrosis and T cell infiltration occurring as a result of tumor antigen presentation following ablation.

Dr. Ramanujam has built several global initiatives. The most notable is a consortium to impact cervical cancer prevention in low resource settings. Her MacArthur Foundation 100&Change proposal, Women-Inspired Strategies for Health:  A Revolution against Cervical Cancer (WISH) was recognized as one of the Top 100 of the 755 proposals submitted to this $100M grant competition (Macarthur 100&Change). In addition to her cervical cancer prevention initiative, she has also created a global women’s education program that intersects design-thinking, STEM concepts, and the U.N. Sustainable Development Goals to promote social justice awareness (IGNITE). She has launched an arts and storytelling initiative to raise awareness of sexual and reproductive health inequities (The (In) Visible Organ).

She has created two companies Zenalux and Calla Health to commercialize her technologies.

Calla Health, a GWHT venture, is centered on sustainably improving women's access to cancer prevention and creating innovations that increase wide scale surveillance of cervical pre-cancers and cancers. Zenalux Biomedical, in collaboration with Duke University, is developing a suite of optical microscopy and spectroscopy tools for preclinical and clinical applications in cancer research. Zenalux’ newest product offering is the Zenascope™ ZF1, a combined portable platform for optical imaging and spectroscopy to characterize the major axes of metabolism along with key vascular features.

Dr. Ramanujam has more than 20 patents to-date and more than 150 publications for screening, diagnostic, and surgical applications. She has received funding from a agencies including NIH R01s and R21s, NIH Bioengineering Partnerships, NCI Academic Industry Partnerships, NIH Small Business grants, DOD, Burroughs Wellcome Fund, DIHI: Innovation Jam, Prevent Cancer and USAID funding. As the director of the Center for Global Women’s Health Technologies, she has developed a network of 50+ partners including international academic institutions and hospitals, non-governmental organizations, ministries of health, and commercial partners; this consortium works to ensure the technologies developed at the center are adopted by cancer control programs in geographically and economically diverse healthcare settings.

Dr. Ramanujam has received a number of awards including the MIT TR100 Young Innovator award (MIT), the Global Indus Technovator award (MIT), the Stansell Family award (Duke), multiple Era of Hope Scholar awards (DoD), the Emerging Leader in Global Health Award (CUGH), the Social Impact Abie Award (AnitaB.org), the Biophotonics Technology Innovator Award (SPIE), the Women in Molecular Imaging Leadership Award (WMIC), the Michael S. Feld Biophotonics Award (OSA) and the Wom C Global Impact Award (Duke). She is a fellow of several optical and biomedical engineering societies including OSA, SPIE, and AIMBE. She is a Fulbright scholar and the 2020 IEEE Distinguished Lecturer. She is an elected member of the National Academy of Inventors. She has demonstrated her work’s global impact through presentations at the United Nations and TEDx events, and a number of national and international plenary talks. Her work has been featured in a number of venues including Medical Daily, Wired Magazine, NPR and several podcasts.

Innovating on optical strategies to peer into the biological landscape of thick tissues. Technologies being developed in her lab leverage principles of optical spectroscopy, optical sectioning microscopy, and molecular imaging. Her research group is developing and applying these optically based tools for three problems in cancer: cancer screening in resource-limited settings, intra-operative margin assessment to detect residual disease during cancer surgery, and visualizing tumor hypoxia and metabolism in the context of cancer therapy and drug discovery. Prof. Ramanujam is leading a multi-disciplinary effort to translate these technologies to clinical applications in the breast, and cervix.