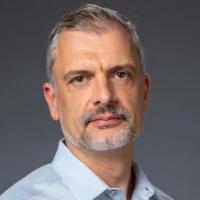 I direct the Brain Stimulation Engineering Lab (BSEL) which focuses on the development, modeling, and application of devices and paradigms for transcranial brain stimulation. Transcranial brain stimulation involves non-invasive delivery of fields (e.g., electric and magnetic) to the brain that modulate neural activity. It is widely used as a tool for research and a therapeutic intervention in neurology and psychiatry, including several FDA-cleared indications. BSEL develops novel technology such as devices for transcranial magnetic stimulation (TMS) that leverage design techniques from power electronics and computational electromagnetics to enable more flexible stimulus control, focal stimulation, and quiet operation. We also deploy these devices in experimental studies to characterize and optimize the brain response to TMS. Another line of work is multi-scale computational models that couple simulations of the electromagnetic fields, single neuron responses, and neural population modulation induced by electric and magnetic brain stimulation. These models are calibrated and validated with experimental neural recordings through various collaborations. Apart from understanding of mechanisms, we develop modeling, algorithmic, and targeting tools for response estimation, dose individualization, and precise localization of transcranial brain stimulation using advanced techniques such as artificial neural networks and machine learning. Moreover, BSEL is involved in the integration of transcranial brain stimulation with robotics, neuronavigation, intracranial electrophysiology recordings, and imaging modalities such as functional magnetic resonance imaging (fMRI) and electroencephalography (EEG), as well as the evaluation of the safety of device–device interactions, for example between transcranial stimulators and implants. Importantly, we collaborate widely with neuroscientists and clinicians within Duke and at other institutions to translate developments from the lab to research and clinical applications. For over 15 years, BSEL has been continuously supported with multiple NIH grants as well as funding by DARPA, NSF, Brain & Behavior Research Foundation, Coulter Foundation, Duke Institute for Brain Sciences, MEDx, Duke University Energy Initiative, and industry. Further, some of our technology has been commercialized, for example as ElevateTMS cTMS, or incorporated in free software packages, such as SimNIBS.

An AI Message Decoder Based on Bacterial Growth Patterns