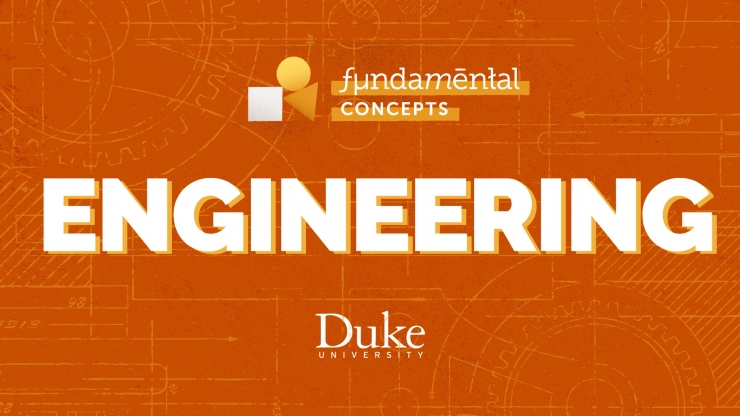 Engineers see the world as an endless string of challenges waiting to be solved—from designing sound buildings and safe bridges to advancing medicine, space exploration, automation and advanced computing, to name just a few examples.

Despite the incredibly wide range and complexity of engineering applications, all stem from relatively basic principles—the building blocks for engineers. In a new video series for YouTube, some of Duke Engineering’s best teachers take the mic, explaining concepts including rocket science and reverse osmosis to a general audience in just ten minutes or less.

If you’re interested in getting a taste of what engineering is all about, check out the episodes below:

When approaching an engineering problem, Professor Linda Franzoni says it’s important to first observe the system in question. What do you already know? What do you need to understand? From there, Franzoni demonstrates how to mathematically describe the system.

Force, lift, drag, thrust. Mechanical engineer Greg Twiss explains how these principles influence a rocket’s centers of gravity and pressure, determining whether the rocket achieves a stable flight path or goes tumbling back to earth.

Computed tomography—or “CT”—scans let doctors look at the inside of our bodies in high resolution. Duke biomedical engineer Libby Bucholz shows how this is possible, and why many different types of engineers and scientists must work together to obtain a usable image.

Clean drinking water is something we take for granted in the U.S., but more than a billion people around the world lack access. Duke civil and environmental engineer David Schaad explains why water quality is critical to human civilization, and how we can treat water using a process called reverse osmosis.

Everyone uses computers, but few of us understand how they actually work. Duke electrical and computer engineer Tyler Bletsch pops the hood of a desktop computer to show its components and discuss its design.

The first step of computer programming is writing an algorithm. Duke electrical and computer engineers Genevieve Lipp and Drew Hilton show how to work examples using LEGO blocks, and explain why doing it from scratch is key.