Through her roles as both a mentor and engineer, Nimmi Ramanujam gauges success by determining how she can change the status quo and push the boundaries of biomedical engineering 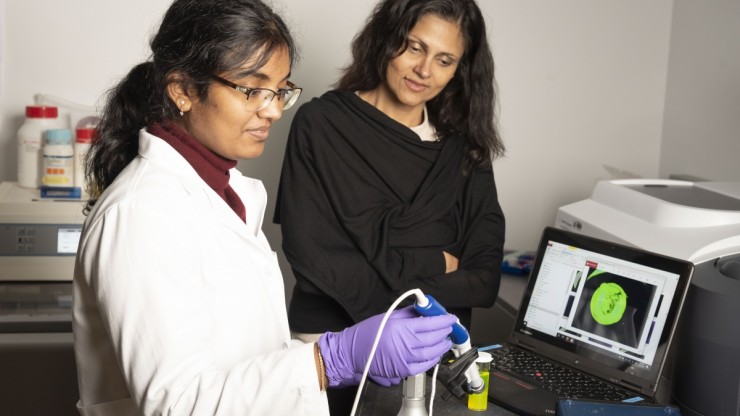 The following text is a condensed version of the full profile, which appears on the Magnify website.

The night before she was scheduled to speak to more than a hundred Duke students, colleagues and at least one Nobel laureate, Nirmala ‘Nimmi’ Ramanujam got cold feet.

She had given countless talks before, many about the pocket colposcope, a device her team invented to bring life-saving access to cervical cancer screening to underserved regions. But this talk would be different. Ramanujam, the Robert W. Carr, Jr. Distinguished Professor of Biomedical Engineering and a professor of Pharmacology and Cancer Biology in the School of Medicine, was supposed to share her personal story as part of a special event highlighting the role of immigrants in the research enterprise. 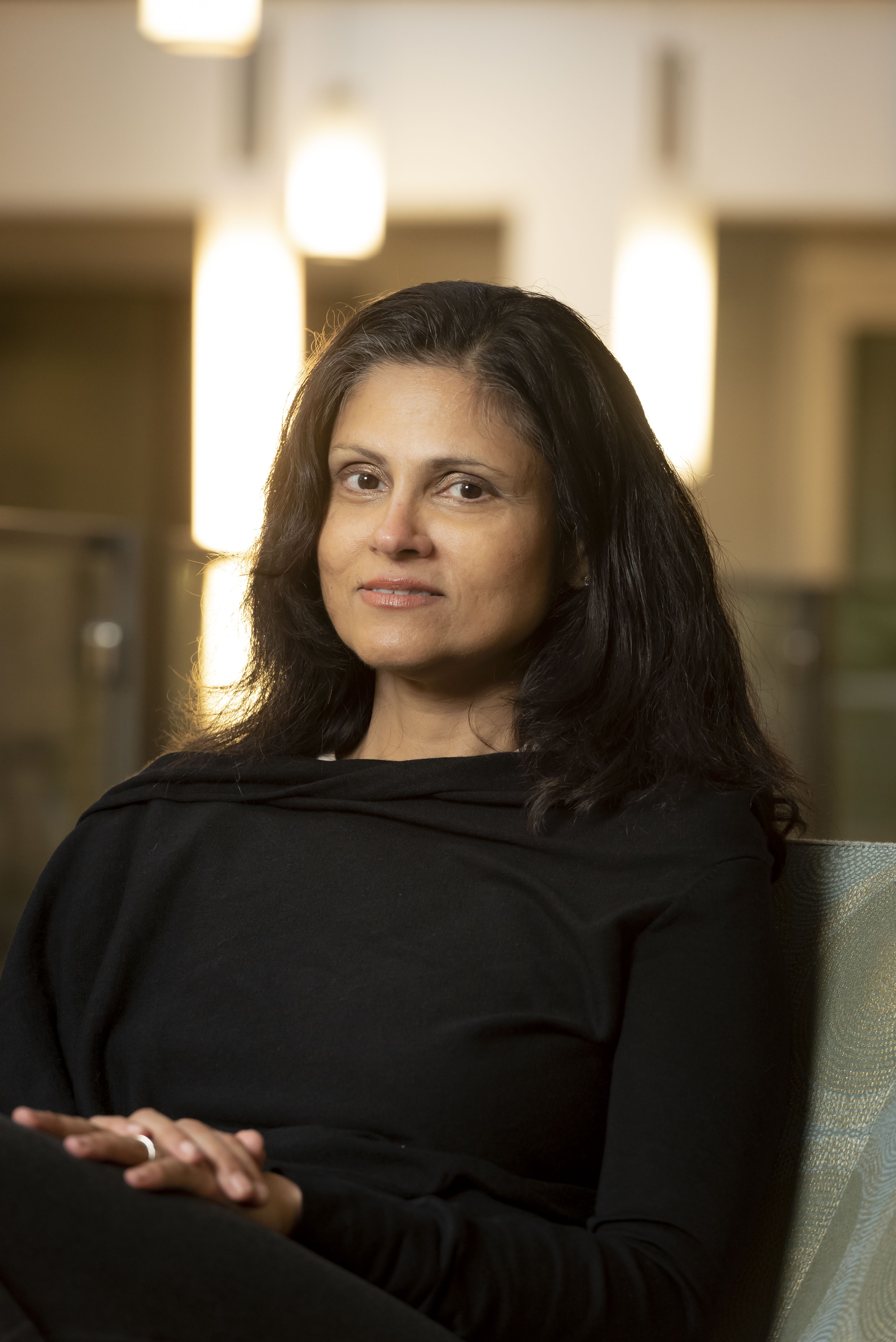 In the days leading up to her talk, she toyed with slides about her childhood in Malaysia, her Southeast Asian heritage, and the parallels between her life and that of the famous mathematician Srinivasa Ramanujan, who not only shared her last name but also belonged to the same caste of Brahmins, the upper echelon of Indian society inhabited by scholars and priests.

“I created a deck of slides that was all about me, but I couldn’t present it,” she said.

While the other six scientists presenting that day told the story of their lives, Ramanujam talked about her students, many of whom were immigrants themselves. “I had to talk about something orthogonal, because I couldn’t share my journey,” she said. “It’s like I made it up the elevator, and I wasn’t sure I wanted to take anyone back down the elevator with me.”

A view from the top

Despite being raised at the top of Hindu society, Ramanujam’s prospects were limited by her gender. She had to cover her arms and plait her thick dark hair. She couldn’t leave her bedroom or touch elderly family members when she got her menstrual period. And she was constantly told that she wasn’t as smart as her brothers.

“I grew up with this whole idea that I didn't have anything meaningful to say,” she recalls. “People told me I wasn’t very good at academics. But I knew I was good at music, so I focused on that.” She became so good at playing the veena, a South Indian instrument resembling the sitar, that she often performed on the radio with her mother, a talented musician.

As she came of age, her father began plotting arranged marriages. Her mother, a closet intellectual who had never been able to pursue any interests outside the arts, suggested their daughter get a higher education instead. When Ramanujam was just 16, they sent her to the U.S., where she went to the University of Texas at Austin, to pursue a degree in engineering, just as her brothers had.

“It was traumatic to come from that place of complete oppression, to this place where the first things you see are McDonald's and alcohol, and you're a vegetarian who’s never had a drink before in your life,” she recalled. “But then there were elements that I could connect with immediately, like music. It was something universal, and relatable.”

At the time, the airwaves were dominated by pop stars like Blondie, Pat Benatar, and Madonna, who sang of women’s empowerment but also embodied the excesses of the late 1980s. Ramanujam struggled to fit in to her new world, and her grades suffered. “I didn’t understand anything,” she said. “I was really a poor student – and I hated engineering.”

Then, just as Ramanujam was gaining her footing toward the latter part of college, she was diagnosed with carcinoma in situ in her cervix, a breast lump, and an ovarian cyst, all in quick succession.

She was more fascinated than frightened by the experience – it helped to be a naïve teenager. “It was the first time in my life that I knew what it was like to have my reproductive health scrutinized and intervened upon.”

She realized technology could be personal, and that a career in health care could give greater meaning to her engineering studies. Though her college advisor scoffed that her grades weren’t good enough for her to get into graduate school, she kept showing up at his office hours to plead her case, and eventually convinced him to make a case for her.

Twenty-five years later, as the Robert W. Carr, Jr. distinguished professor at Duke University, in the second highest ranked biomedical engineering program in the U.S., Ramanujam still has an aversion to grades. She doesn’t give exams in her classes and relies more on interviews than transcripts when hiring students into her program. She doesn’t even pay attention to the impact factor of the journals she publishes in, instead gauging success by how much she is able to change the status quo through the lives of those she is affecting.

“Nimmi always talks about impact,” said Jenna Mueller, who has worked with Ramanujam for the last ten years as a Ph.D. student and now as a postdoctoral associate.

“She has a bird’s-eye view, and then she can zoom in to the tiniest detail and know what is happening with the science. I think her vision is unparalleled in how she pushes the boundaries of what biomedical engineering is.”

Read the full article on Magnify, a new publication from Duke University's School of Medicine. 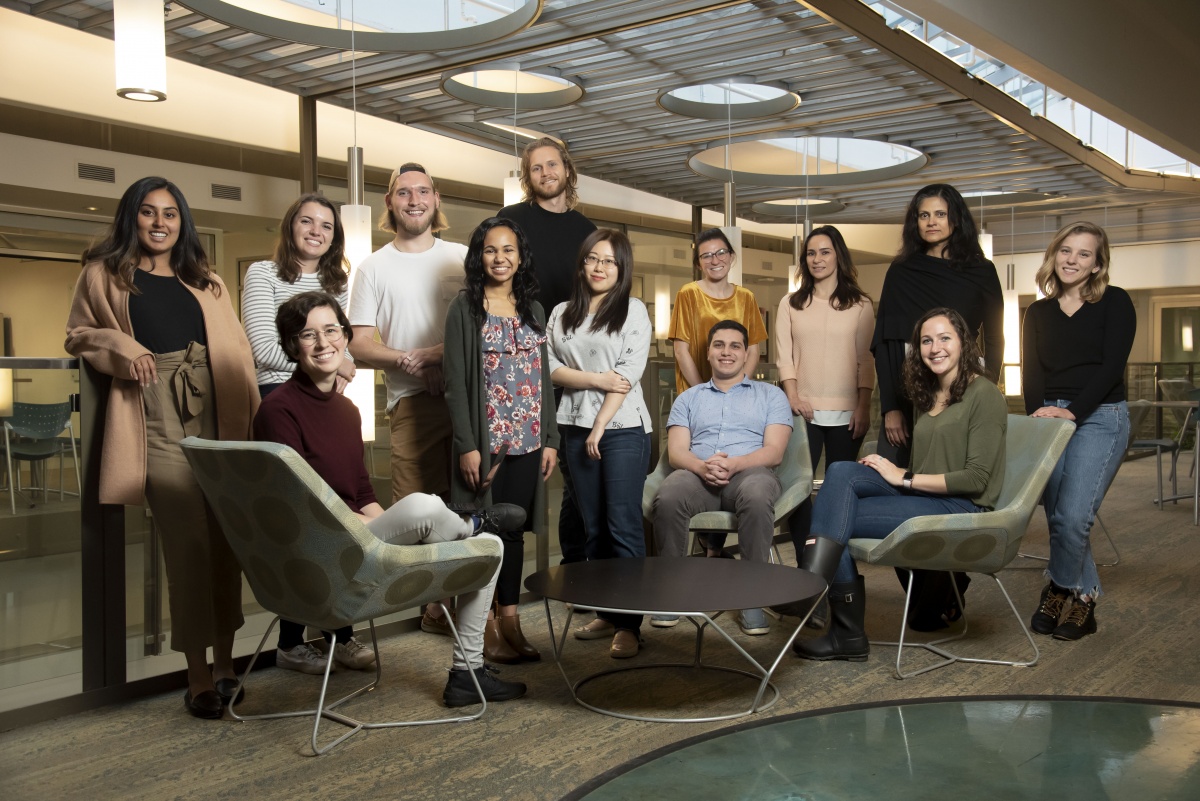