A Window into the Hidden World of Colons

Combining a skin-level glass window with a gut-stabilizing magnet, researchers get a view into the colon of a live animal 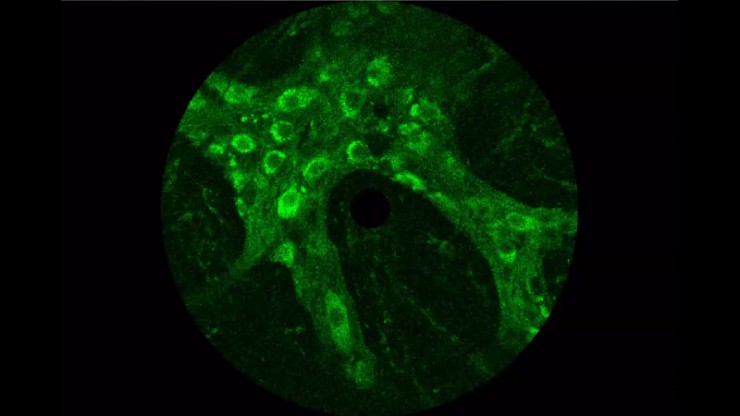 Biomedical engineers at Duke University have developed a system that allows for real-time observations of individual cells in the colon of a living mouse.

Researchers expect the procedure to allow new investigations into the digestive system’s microbiome as well as the causes of diseases such as inflammatory bowel disease and colon cancer and their treatments.

The procedure described online on December 11 in Nature Communications involves surgically implanting a transparent window into a mouse’s abdominal skin above the colon. Similar setups are already being used to allow live looks into the detailed inner workings of the brain, spinal cord, liver, lungs and other organs. Imaging a live colon, however, is a slipperier proposition.

“A brain doesn’t move around a lot, but the colon does, which makes it difficult to get detailed images down to a single cell,” said Xiling Shen, the Hawkins Family Associate Professor of Biomedical Engineering at Duke University. “We’ve developed a magnetic system that is strong enough to stabilize the colon in place during imaging to obtain this level of resolution, but can quickly be turned off to allow the colon to move freely.”

Immobilizing the colon for imaging is a tricky task for traditional methods such as glue or stitches. At best they can cause inflammation that would ruin most experiments. At worst they can cause obstructions, which can quickly kill the mouse being studied.

To skirt this issue, Shen developed a magnetic device that looks much like a tiny metal nasal strip and can be safely attached to the colon. A magnetic field snaps the colon into place and keeps it stable during imaging, but once turned off, leaves the colon free to move and function as normal.

A vital organ that houses much of the digestive system’s microbiome, the colon can be afflicted by diseases such as inflammatory bowel disease, functional gastrointestinal disorders and cancer. It also plays a key role in regulating the immune system, and can communicate directly with the brain through sacral nerves.

“There is a great need to better understand the colon, because it can suffer from so many diseases and plays so many roles with significant health implications,” Shen said.

In the study, Shen and his colleagues conducted several proof-of-principle experiments that provide starting points for future lines of research.

The researchers first colonized a living mouse colon with E. coli bacteria, derived from Crohn’s disease patients, that had been tagged with fluorescent proteins. The researchers then showed they could track the migration, growth and decline of the bacteria for more than three days. This ability could help researchers understand not only how antagonistic bacteria afflict the colon, Shen says, but the positive roles probiotics can play and which strains can best help people with gastrointestinal disorders.

In the next experiment, mice were bred with several types of fluorescent immune cells. The researchers then induced inflammation in the colon and carefully watched the activation of these immune cells. Shen says, this approach could be used with various types of immune cells and diseases to gain a better understanding of how the immune system responds to challenges.

Shen and his colleagues then showed that they could tag and track colon epithelial stem cells associated with colorectal cancer throughout radiation treatment. They also demonstrated that they could watch nerves throughout the colon respond to sacral nerve stimulation, an emerging therapy for treating motility and immune disorders such as functional gastrointestinal disorders and irritable bowel disorder.

“While we know electrically stimulating the sacral nerves can alleviate the symptoms of these gastrointestinal disorders, we currently have no idea why or any way to optimize these treatments,” Shen said. “Being able to see how the colon’s neurons respond to different waveforms, frequencies and amplitudes of stimulation will be invaluable in making this approach a better option for more patients.”