Using Invisible Light To See Deeper Into The Brain 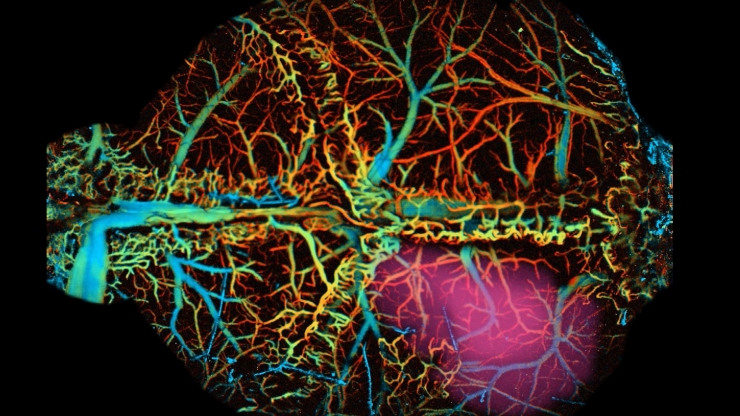 This high-resolution photoacoustic and fluorescent image of a mouse brain shows the brain’s oxygenation from green (veins) to red (arteries) and the neural activation region is purple.

Biomedical engineers, cell biologists and neuroscientists at Duke University and the Albert Einstein College of Medicine have developed a new type of genetically encoded neural biosensor that operates in near-infrared light.

The invention will allow researchers to non-invasively study how neurons fire at deeper levels in a living brain while simultaneously watching oxygen consumption.

The research appears on October 26, 2020 in the journal Nature Biotechnology.

“Scientists have been working toward this for a long time, and we’re the first ones to have done it,” said Junjie Yao, assistant professor of biomedical engineering at Duke. “Tissue doesn’t absorb or scatter near-infrared light nearly as much as visible light, which allows the photons to penetrate into brain tissue deeper than the current standards.”

One of the foremost goals of neuroscience is to link complex behavior, like the process of making and storing memories, to the activation of various neurons and structures throughout the brain. One of the ways researchers accomplish this difficult task is through the use of genetically encoded calcium indicators, or GECIs. These biosensors carry  fluorescent proteins that dim when there is a calcium spike in a cell, which occurs when a neuron fires.

Researchers have traditionally lit up these biosensors using one- and two-photon microscopy, which send photons of light into brain tissue. However, currently available biosensors work in the visible spectrum, which cannot penetrate the tissue very deeply without being absorbed or scattered. The resulting chaos prevents researchers from seeing through more than a half millimeter of tissue.

In the new study, Yao, Vladislav Verkhusha, professor of anatomy and structural biology at Einstein, and a team of collaborators at the University of California, Berkeley and Northwestern University, found a way around this issue. The researchers created a calcium indicator that can be imaged using near-infrared light, which can more easily penetrate brain tissue. And because near-infrared light does not interfere with traditional biosensors that operate in visible light, multiple types of biosensors can be used at the same time without worrying about their spectral crosstalk.

“Our new calcium indicators are essentially like birds in a forest,” said Yao. “While birds normally fly around and make noise, when a predator is in the woods, they go silent. You don’t need to specifically see the predator to know there is danger, you just know that the lack of sound means that something there. Similarly with our indicators, you don’t need to specifically see the neuron firing, you just need to look for the signal: a dimming of the light emitted from the calcium indicators.”

“I hope that near-infrared neural biosensors will become essential molecular tools for animal models of human diseases as well as for cognitive neuroscience studies, allowing us to visualize mechanisms of various emotional and behavioral regulation in the brain,” said Verkhusha. “Since these biosensors operate in the near-infrared range, they can be imaged non-invasively, right through the skull of behaving animals using miniature head-mounted cameras, allowing us to visualize the brain structures functioning during specific activities.”

To demonstrate the power of their new calcium indicators in live animals, Yao’s group at Duke paired them with a second imaging technology called photoacoustic microscopy. Pioneered by Yao, the technology allows researchers to combine the properties of light and ultrasound  to create high-resolution images.

The combined fluorescence and photoacoustic imaging showed it would be possible to simultaneously monitor the neuronal activity and the brain oxygenation of a mouse brain through its intact skull.

“We have enabled a powerful capability by imaging the brain’s oxygenation and neuron firing at the same time, two essential pillars supporting the whole brain’s functioning structure,” Yao said. “While oxygen provides fuel to the brain, neuron firing delivers the information.”

Yao, Verkhusha and the team are excited to be able to share this new technology with the wider neuroscience community. As they push forward, they hope to continue improving both the calcium indicators and the imaging technology so they can look deeper into the brain.

“We have the potential to use near-infrared calcium indicators to study, for example, how we process memories in the hippocampus or how Alzheimer’s disease destroys memory capability,” says Yao. “All of these areas of research can benefit from having a way to look deeper and deeper into the brain, and for us the sky is the limit.”