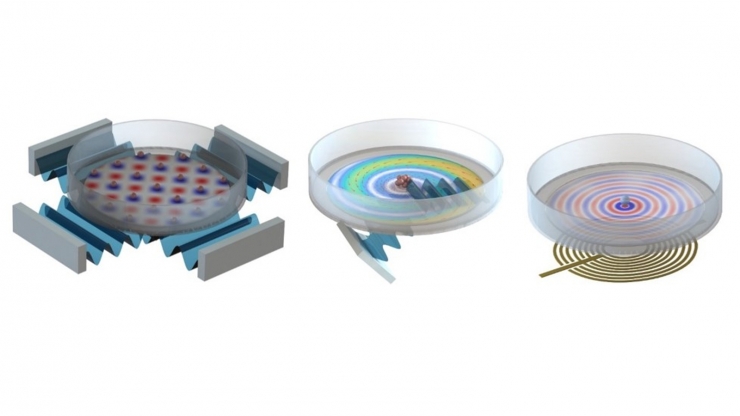 Three proof of concept experimental setups that use acoustic tweezers in Petri dishes. From left to right, a standing pattern for sorting, a whirlpool for concentrating, and high-frequency beam-like waves for concentration and stimulation.

Mechanical engineers at Duke University have demonstrated a set of prototypes for manipulating particles and cells in a Petri dish using sound waves. The devices, known in the scientific community as “acoustic tweezers,” are the first foray into making these types of tools, which have thus far been relegated to laboratories with specific equipment and expertise, available for use in a wide array of settings.

The paper describing the technology appears online on September 9 in the journal Science Advances.

Acoustic tweezers are a powerful, versatile set of tools that use sound waves to manipulate bioparticles ranging from nanometer-sized extracellular vesicles to millimeter-sized multicellular organisms. Over the past several decades, the capabilities of acoustic tweezers have expanded from simplistic particle trapping to the precise rotation and translation of cells and organisms in three dimensions.

“Recent advances have led to many advanced, versatile tools,” said Tony Jun Huang, the William Bevan Distinguished Professor of Mechanical Engineering and Materials Science, who has been working in the field for more than a decade. “However, at the end of the day, the success of this field depends on whether end users such as biologists, chemists or clinicians are willing to adopt this technology or not. This paper demonstrates a step toward a much friendlier workflow to make it easier for end users to adopt this technology.”

In their first application, acoustic tweezers used sound waves generated from opposite sides of a microfluidic chip or chamber to create nodes where cells or microparticles are trapped. Moving the wavefronts of the sound waves across the opposing surfaces of the chamber controlled a particle’s position in two dimensions, while adjusting the sound waves’ amplitudes could push or pull them in the third.

More advanced setups have since been demonstrated, where sound waves reverberate throughout a fluidic chamber. For example, depending on the application, patterns can be created and changed to separate and manipulate multiple particles at once, or whirlpools can be formed to concentrate a group of particles.

But no matter how advanced their abilities, acoustic tweezers have thus been relegated to prototype demonstrations and laboratories with specialized equipment; very few biologists have adopted this technology yet.

“Our goal is to bridge the gap between acoustic innovations and the biological/clinical benchtop,” said Huang.

In the paper, Huang and his colleagues demonstrate three prototype setups that use transducers to create sound waves that manipulate particles in the most common cell culture plate found in biomedical laboratories—the Petri dish.

In the first design, a set of four transducers, one on each side of the Petri dish, create sound waves that interact with one another to create a standing pattern within the dish’s liquid sample. The setup could be used for multi-configuration cell patterning, cell-cell interaction studies and the construction of 3D tissues.

The second design uses a tilted transducer sending an angled sound wave from beneath the Petri dish to create a whirlpool that concentrates the dish’s contents in the center. This ability would allow researchers to concentrate bioparticles for signal enhancement and the construction of large cell spheroids.

In the final setup, holographic interdigital transducers—two transducers fitted together like a zipper—create high-frequency beam-like waves from below the Petri dish to control particles in specific locations. By switching between different designs, the setup can stimulate cells as well as concentrate and trap bioparticles.

Together, the setups demonstrate easy-to-use acoustic tweezers that can gently manipulate a wide variety of cells and particles without touching or labeling them. Potential applications include patterning and printing cells, separating and sorting cells, controlling cell-cell interactions, constructing tissues and rotating multicellular organisms.

“The purpose of this study was to duplicate some of the previous functions of our acoustic tweezers in Petri dishes,” said Huang, who has also cofounded a company to pursue commercialization of the technology. “Our next goal is to build a single prototype that realizes all of the abilities of these three setups, if not more.”