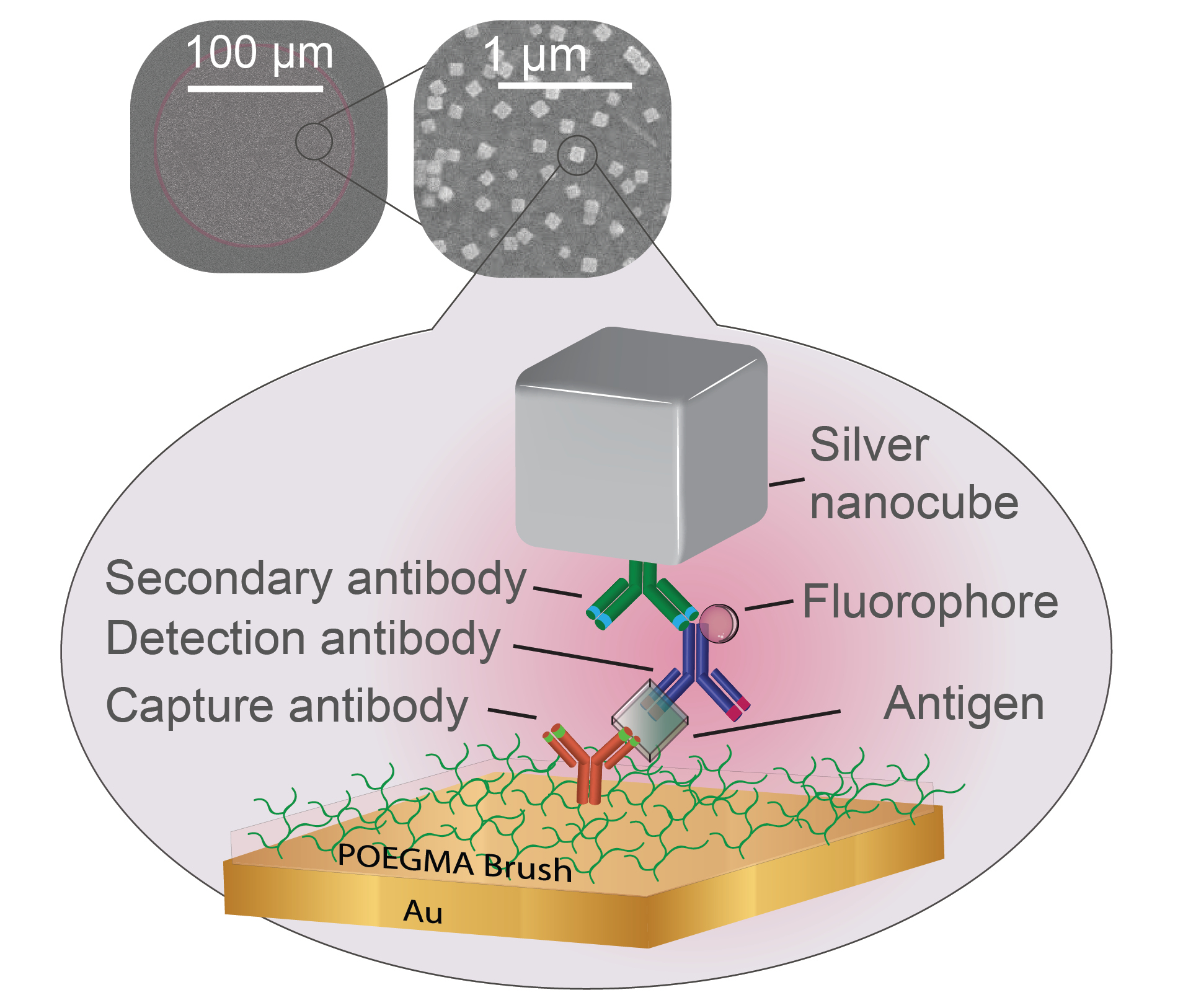 Engineers at Duke University have shown that nanosized silver cubes can make diagnostic tests that rely on fluorescence easier to read by making them more than 150 times brighter. Combined with an emerging point-of-care diagnostic platform already shown capable of detecting small traces of viruses and other biomarkers, the approach could allow such tests to become much cheaper and more widespread.

The results appeared online on May 6 in the journal Nano Letters.

Plasmonics is a scientific field that traps energy in a feedback loop called a plasmon onto the surface of silver nanocubes. When fluorescent molecules are sandwiched between one of these nanocubes and a metal surface, the interaction between their electromagnetic fields causes the molecules to emit light much more vigorously. Maiken Mikkelsen, the James N. and Elizabeth H. Barton Associate Professor of Electrical and Computer Engineering at Duke, has been working with her laboratory at Duke to create new types of hyperspectral cameras and superfast optical signals using plasmonics for nearly a decade.

At the same time, researchers in the laboratory of Ashutosh Chilkoti, the Alan L. Kaganov Distinguished Professor of Biomedical Engineering, have been working on a self-contained, point-of-care diagnostic test that can pick out trace amounts of specific biomarkers from biomedical fluids such as blood. But because the tests rely on fluorescent markers to indicate the presence of the biomarkers, seeing the faint light of a barely positive test requires expensive and bulky equipment.

“Our research has already shown that plasmonics can enhance the brightness of fluorescent molecules tens of thousands of times over,” said Mikkelsen. “Using it to enhance diagnostic assays that are limited by their fluorescence was clearly a very exciting idea.”

“There are not a lot of examples of people using plasmon-enhanced fluorescence for point-of-care diagnostics, and the few that exist have not been yet implemented into clinical practice,” added Daria Semeniak, a graduate student in Chilkoti’s laboratory. “It’s taken us a couple of years, but we think we’ve developed a system that can work.”

In the new paper, researchers from the Chilkoti lab build their super-sensitive diagnostic platform called the D4 Assay onto a thin film of gold, the preferred yin to the plasmonic silver nanocube’s yang. The platform starts with a thin layer of polymer brush coating, which stops anything from sticking to the gold surface that the researchers don’t want to stick there.The researchers then use an ink-jet printer to attach two groups of molecules tailored to latch on to the biomarker that the test is trying to detect. One set is attached permanently to the gold surface and catches one part of the biomarker. The other is washed off of the surface once the test begins, attaches itself to another piece of the biomarker, and flashes light to indicate it’s found its target.

After several minutes pass to allow the reactions to occur, the rest of the sample is washed away, leaving behind only the molecules that have managed to find their biomarker matches, floating like fluorescent beacons tethered to a golden floor.

“The real significance of the assay is the polymer brush coating,” said Chilkoti. “The polymer brush allows us to store all of the tools we need on the chip while maintaining a simple design.” 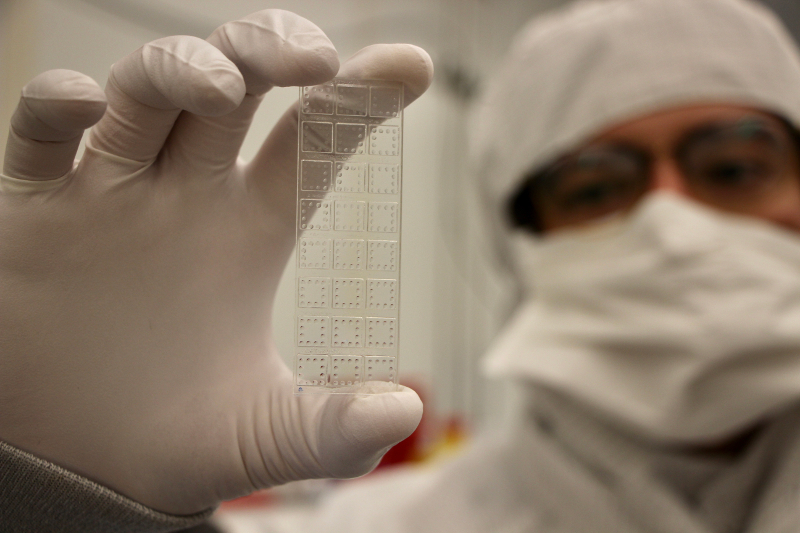 While the D4 Assay is very good at grabbing small traces of specific biomarkers, if there are only trace amounts, the fluorescent beacons can be difficult to see. The challenge for Mikkelsen and her colleagues was to place their plasmonic silver nanocubes above the beacons in such a way that they supercharged the beacons’ fluorescence.

But as is usually the case, this was easier said than done.

“The distance between the silver nanocubes and the gold film dictates how much brighter the fluorescent molecule becomes,” said Daniela Cruz, a graduate student working in Mikkelsen’s laboratory. “Our challenge was to make the polymer brush coating thick enough to capture the biomarkers—and only the biomarkers of interest—but thin enough to still enhance the diagnostic lights.”

The researchers attempted two approaches to solve this Goldilocks riddle. They first added an electrostatic layer that binds to the detector molecules that carry the fluorescent proteins, creating a sort of “second floor” that the silver nanocubes could sit on top of. They also tried functionalizing the silver nanocubes so that they would stick directly to individual detector molecules on a one-on-one basis.

While both approaches succeeded in boosting the amount of light coming from the beacons, the former showed the best improvement, increasing its fluorescence by more than 150 times. However, this method also requires an extra step of creating a “second floor,” which adds another hurdle to engineering a way to make this work on a commercial point-of-care diagnostic rather than only in a laboratory. And while the fluorescence didn’t improve as much in the second approach, the test’s accuracy did.

“Building microfluidic lab-on-a-chip devices through either approach would take time and resources, but they’re both doable in theory,” said Cassio Fontes, a graduate student in the Chilkoti laboratory. “That’s what the D4 Assay is moving toward.”

And the project is moving forward. Earlier in the year, the researchers used preliminary results from this research to secure a five-year, $3.4 million R01 research award from the National Heart, Lung, and Blood Institute. The collaborators will be working to optimize these fluorescence enhancements while integrating wells, microfluidic channels and other low-cost solutions into a single-step diagnostic device that can run through all of these steps automatically and be read by a common smartphone camera in a low-cost device.

“One of the big challenges in point-of-care tests is the ability to read out results, which usually requires very expensive detectors,” said Mikkelsen. “That’s a major roadblock to having disposable tests to allow patients to monitor chronic diseases at home or for use in low-resource settings. We see this technology not only as a way to get around that bottleneck, but also as a way to enhance the accuracy and threshold of these diagnostic devices.”

This research was supported by the National Institute of Health (5R01-HL144928-02), the Research Corporation for Science Advancement, the United States Special Operations Command (W81XWH-16-C-0219), the Combat Casualty Care Research Program (JPC-6) (W81XWH-17-2-0045) and the National Council for the Improvement of Higher Education - CAPES (the Science without Borders project).