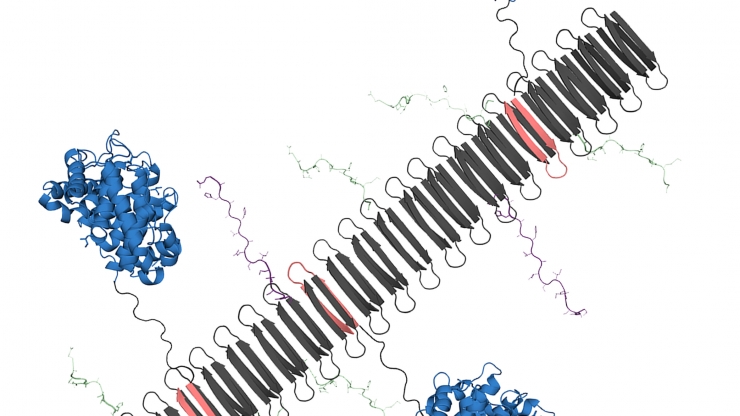 Biomedical engineers at Duke University have developed a self-assembling nanomaterial that can help limit damage caused by inflammatory diseases by activating key cells in the immune system. In mouse models of psoriasis, the nanofiber-based drug has been shown to mitigate damaging inflammation as effectively as a gold-standard therapy.

One of the hallmarks of inflammatory diseases, like rheumatoid arthritis, Crohn’s disease and psoriasis, is the overproduction of signaling proteins, called cytokines, that cause inflammation. One of the most significant inflammatory cytokines is a protein called TNF. Currently, the best treatment for these diseases involves the use of manufactured antibodies, called monoclonal antibodies, which are designed to target and destroy TNF and reduce inflammation.

Although monoclonal antibodies have enabled better treatment of inflammatory diseases, the therapy is not without its drawbacks, including a high cost and the need for patients to regularly inject themselves. Most significantly, the drugs also have uneven efficacy, as they may sometimes not work at all or eventually stop working as the body learns to make antibodies that can destroy the manufactured drug.

To circumvent these issues, researchers have been exploring how immunotherapies can help teach the immune system how to generate its own therapeutic antibodies that can specifically limit inflammation.

“We’re essentially looking for ways to use nanomaterials to induce the body’s immune system to become an anti-inflammatory antibody factory,” said Joel Collier, a professor of biomedical engineering at Duke University. “If these therapies are successful, patients need fewer doses of the therapy, which would ideally improve patient compliance and tolerance. It would be a whole new way of treating inflammatory disease.”

In their new paper, which appeared online in the Proceedings of the National Academy of Sciences on April 5, Collier and Kelly Hainline, a graduate student in the Collier lab, describe how novel nanomaterials could assemble into long nanofibers that include a specialized protein, called C3dg. These fibers then were able to activate immune system B-cells to generate antibodies.

“C3dg is a protein that you’d normally find in your body,” said Hainline. “The protein helps the innate immune system and the adaptive immune system communicate, so it can activate specific white blood cells and antibodies to clear out damaged cells and destroy antigens.”

Due to the protein’s ability to interface between different cells in the immune system and activate the creation of antibodies without causing inflammation, researchers have been exploring how C3dg could be used as a vaccine adjuvant, which is a protein that can help boost the immune response to a desired target or pathogen.

In their new nanomaterial, Hainline and Collier were able put this idea to the test by weaving key fragments of the C3dg protein with components of TNF into nanofibers. The C3dg protein would trigger the B-cells to create antibodies, while the TNF components would provide a blueprint of what the antibodies need to seek out and destroy.

“When Kelly assembled the C3dg protein and key portions of TNF into these nanofibers, she saw that there was a strong B-cell response, which means there was an increased production of antibodies that targeted TNF,” said Collier. “In standard mouse models of inflammation, mice experience a temperature change where their internal temperature will drop. But when Kelly delivered her C3dg nanofibers, it was highly protective, and the mice didn’t experience an inflammatory response.”

When the team tested their nanomaterial in the psoriasis mouse model, they found that the nanofibers carrying C3dg were as effective as a monoclonal antibody therapy. And because C3dg is normally found in the body, it wasn’t flushed out of the system by anti-drug antibodies.

After examining the psoriasis model, the team made a surprising discovery -- C3dg wasn’t just stimulating antibody production in the B-cells, it was also influencing the response of T-cells.

“We observed that nanofibers that only contained the C3dg components without the TNF components still showed a therapeutic benefit to our models, which was surprising. But I think the most significant discovery was seeing a beneficial T-cell response that was activated by a protein you’d naturally find in your body,” said Hainline. “That kind of response had been seen before with other proteins, but we haven’t seen any reports of people using that response with C3dg.”

For their next steps, the team hopes to further explore the mechanisms behind this beneficial T-cell activation. They’ll also pursue additional experiments to explore the response to similar nanomaterials in rheumatoid arthritis models.

“We’re still learning about this T-cell response, and we’re trying to understand how it’s involved,” said Collier. “Ultimately, we’d love to see if C3dg can be used as a universal component in multiple different therapies against inflammation, especially if we can swap out the TNF segments with a different target. This work clearly indicates that nanomaterials involving C3dg warrant further development as immunotherapies.”