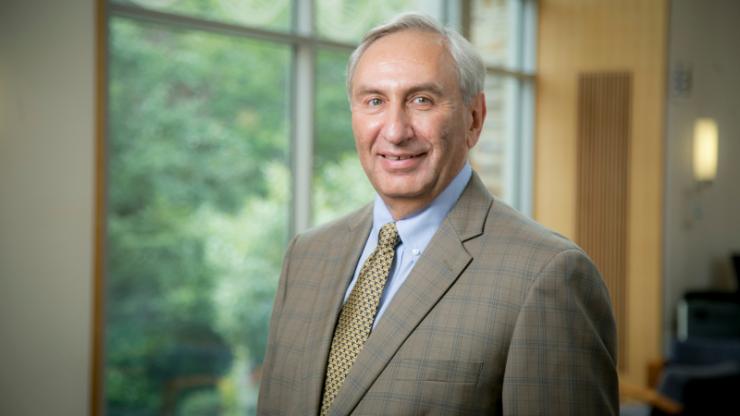 Michael Rubinstein, professor of mechanical engineering and materials science, biomedical engineering, chemistry, and physics at Duke University, has been selected to receive the 2019 Soft Matter and Biophysical Chemistry Award by the Royal Society of Chemistry (RSC). He was cited for “physicochemical insights into soft matter behaviour relevant to respiratory dysfunction.”

The award is presented annually by the RSC, the world’s leading chemistry community founded more than 170 years ago, for outstanding and innovative research in soft condensed matter and/or the application of physico-chemical techniques to biological problems. The award consists of a £2000 and a medal as well as an invitation to deliver lectures at up to four universities across the United Kingdom and Ireland.

Rubinstein’s seminal work for which he is being recognized was published in Science in 2012. After spending nearly a decade developing and experimentally testing his theories, Rubinstein and his colleagues caused a paradigm shift in our understanding of how the surface of our lungs function and interact with mucous both in healthy and disease states.

The research showed that the cilia protruding from lung tissue—and the lung tissue itself—is covered by brush-like structures crucial to regulating the organ’s health. When healthy and hydrated, the structures act like a box spring, supporting the layer of mucous lining the tissue while protecting the entire system from the pathogens and irritants we breathe in on a daily basis.

When affected by disease, the brush-like structures become folded and shriveled. This compression of the brush resulting in problems for our breathing capabilities is caused by the increase of the mucus osmotic pressure, which can be measured like blood pressure as a biomarker for disease. This also provided new drug targets, as rehydrating the brushes and lowering the osmotic pressure can alleviate many disease symptoms.

Outside of this seminal research and other discoveries in the field, Rubinstein has also played an active role in the society’s administration. He chaired the editorial board of the journal Soft Matter for four years and led the transition from an in-house professional editorial board to one filled by scientists from around the world, which is the standard for its peer society-based journals.