Revolutionizing Neurosurgical Planning With the Use of Holograms 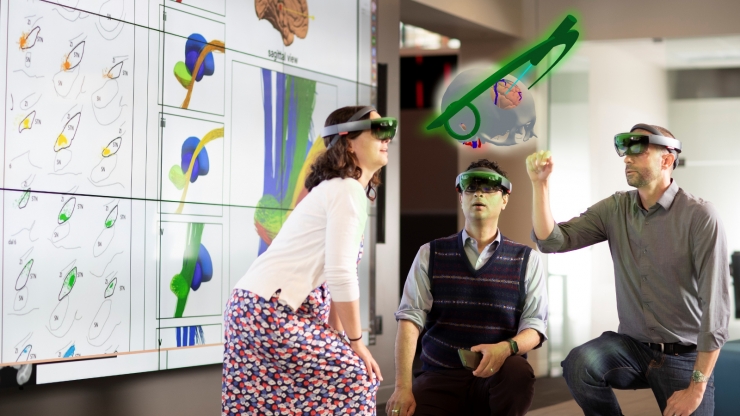 Cameron McIntyre demonstrating the use of his holographic visualization tool at Case Western.

Movement disorders have outwit-ted researchers for decades. The brain’s complex neurological structure makes the treatment of Parkinson’s, essential tremor, dystonia and other motor disturbances risky and inadequate. But Deep Brain Stimulation (DBS), a revolutionary clinical procedure, has brought hope to patients who suffer from these illnesses.

DBS calls for the implantation of a small pacemaker under a patient’s clavicle. Insulated wires carry electrical pulses from the pacemaker to the basal ganglia, a region of the brain that is responsible for planning movement. The results can be astounding—tremors dissipate and motor control improves. However, positive outcomes are not always guaranteed.

Cameron McIntyre, a pioneer in the field of DBS, has created holographic platforms to allow neurosurgeons to visualize the brain’s anatomy in three dimensions. These tools can be used to help surgical teams plan a patient’s DBS surgery. This July, Duke will welcome McIntyre to the faculty of the Department of Biomedical Engineering and the Department of Neurosurgery. 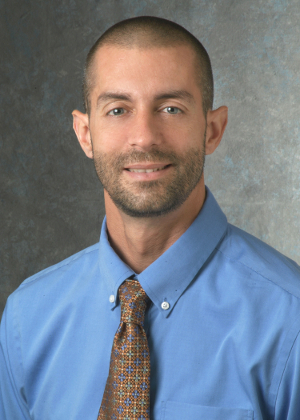 McIntyre has a BS and PhD in biomedical engineering from Case Western Reserve University. Additionally, he received postdoctoral training from Johns Hopkins University and Emory University, where he studied DBS.

In McIntyre’s freshman Introduction to Bio-medical Engineering class, he was introduced to electrical stimulation by a guest lecturer, Hunter Peckham, the Donnell Professor of Biomedical Engineering and Orthopaedics at Case Western. Peckham is known for his groundbreaking research on the use of electrical stimulation and implantable devices to activate otherwise unresponsive areas of the body. During this presentation, Peckham brought in research subjects as examples of his work. McIntyre witnessed a patient with spinal cord injuries using a hand which had previously been immobile. This was achieved through the implantation of electrodes, devices that carry electrical pulses to specific areas of the body. These subjects demonstrated the incredible effects of electrical stimulation technology.

McIntyre describes this presentation as life-changing. “I just remember thinking, I don’t really know what I want to do with my life, but if I could do something like that, that would be cool.”

McIntyre began working with Warren Grill, who was a junior faculty member at Case Western at the time. Grill, now a professor of biomedical engineering at Duke, teamed up with McIntyre to research the effects of using electrical stimulation in spinal cord therapy. McIntyre continued to pursue this research as he began his PhD at Case Western.

Near the end of McIntyre’s PhD studies, at the start of the new millennium, DBS became available as a clinical treatment in the US. However, as DBS was still new, most scientists were not exploring its possibilities. McIntyre, on the other hand, found DBS fascinating. He saw it as an “opportunity that would take engineering knowledge and put it into something that might be clinically relevant.” He wanted to expand the viable treatments available to patients with movement disorders.

McIntyre’s lab at Case Western is currently using its research on neurology, neuro-anatomy and DBS to create tools that make neurosurgery more effective. These tools are holographic visualization platforms for neurosurgical planning, which McIntyre describes as “based primarily on a Microsoft HoloLens 2 Headset—a head-mounted display that gives you a simulation of a 3D hologram in the space around you.” This technology is a new way to visualize data, and one that can be applied to very specific neurosurgical procedures. With this device, surgeons are able to see both the real world and an augmented visual state, a hologram.

This technology is a new way to visualize data, and one that can be applied to very specific neurosurgical procedures. With this device, surgeons are able to see both the real world and an augmented visual state, a hologram.

Before a neurosurgeon can perform a complex surgery, they must first set aside hours to plan out the case and the procedure. Many parts of a neurosurgical procedure are difficult to visualize, due to the brain’s complicated anatomy. McIntyre’s holographic platforms give neurosurgeons an effective way to visualize the brain.

The holographic visualization platforms McIntyre and his team developed are currently academic prototypes. The next step McIntyre could take with these tools is to commercialize them and put the instruments into clinical practice. However, the process of commercialization is long and arduous, involving years of testing and clinical trials before achieving FDA approval.

Fortunately, McIntyre is not new to the field of commercialization. His first startup company created a software tool to help neurologists customize stimulation parameters for individual patients. After that, he created software to help neurosurgeons identify target locations in a patient’s brain for electrodes. Now, his newest company provides clinical education to neurosurgeons and neurologists on the operation of DBS tools. He uses holographic representations in his training.

During the COVID-19 pandemic, McIntyre has also learned to be flexible. He and his team work remotely but are as productive as ever.

McIntyre is excited to join Duke’s collaborative community this summer. “One of the things that’s very special about Duke,” says McIntyre, “is that you have a really great medical center and a really great engineering center within a hundred yards of each other.” This proximity promotes collaboration between top experts in many fields, including neurosurgery, neuroscience, machine learning and engineering.

“That’s an academic person’s dream,” says McIntyre. “That’s where ideas come from, and that’s where technology comes from.” And, coming from Cleveland, Ohio, he is especially looking forward to North Carolina’s warm weather—the sunshine and the lack of snow!

Hope Pratt is a freshman from New Jersey planning to major in biomedical engineering.