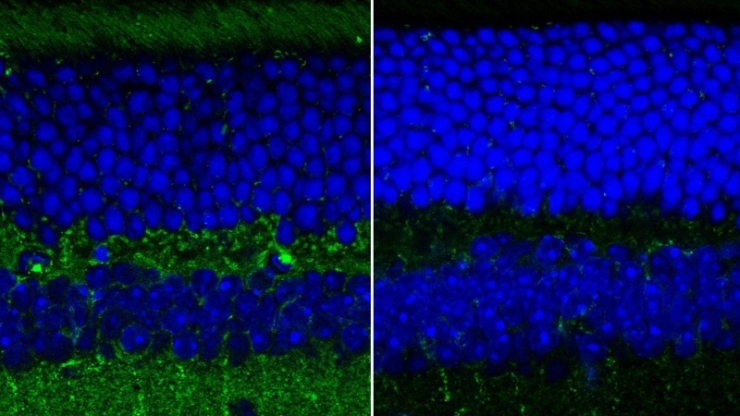 A fluorescence image of retinal layers taken with a confocal microscope from wild, healthy mice (right) and mice genetically bred to show symptoms of Alzheimer’s disease (left). The green represents amyloid deposits that are thought to correlate with Alzheimer

Biomedical engineers at Duke University have devised a new imaging device capable of measuring both the thickness and texture of the various layers of the retina at the back of the eye. The advance could be used to detect a biomarker of Alzheimer’s disease, potentially offering a widespread early warning system for the disease.

The results appear online on May 13 in the journal Scientific Reports.

“Previous research has seen a thinning of the retina in Alzheimer’s patients, but by adding a light-scattering technique to the measurement, we’ve found that the retinal nerve fiber layer is also rougher and more disordered,” said Adam Wax, professor of biomedical engineering at Duke. “Our hope is that we can use this insight to create an easy and cheap screening device that wouldn’t only be available at your doctor’s office, but at places like your local pharmacy as well.”

Diagnoses of Alzheimer’s disease are currently only made after a patient begins to show symptoms of cognitive decline. Even then, the only way to definitively determine that Alzheimer’s was the cause is with expensive MRI and PET scans or through an autopsy. But if disease progress can be halted through early interventions such as drugs and mental exercise, patients can have a greatly improved quality of life. This is why researchers are looking for biomarkers that could be used as early warning signs of the disease.

One such potential biomarker comes from the retina, which is literally an extension of the brain and part of the central nervous system. Previous research has shown that Alzheimer’s can cause structural changes to the retina, most notably a thinning of the inner retinal layers.

“The retina can provide easy access to the brain, and its thinning can be indicative of a decrease in the amount of neural tissue, which can mean that Alzheimer’s is present,” said Wax.

Other diseases such as glaucoma and Parkinson’s disease, however, can also cause a thinning of the retina. Inconsistent test results might also come from differences between the machines most often used for these types of measurements, optical coherence tomography (OCT) devices, and how researchers use them. 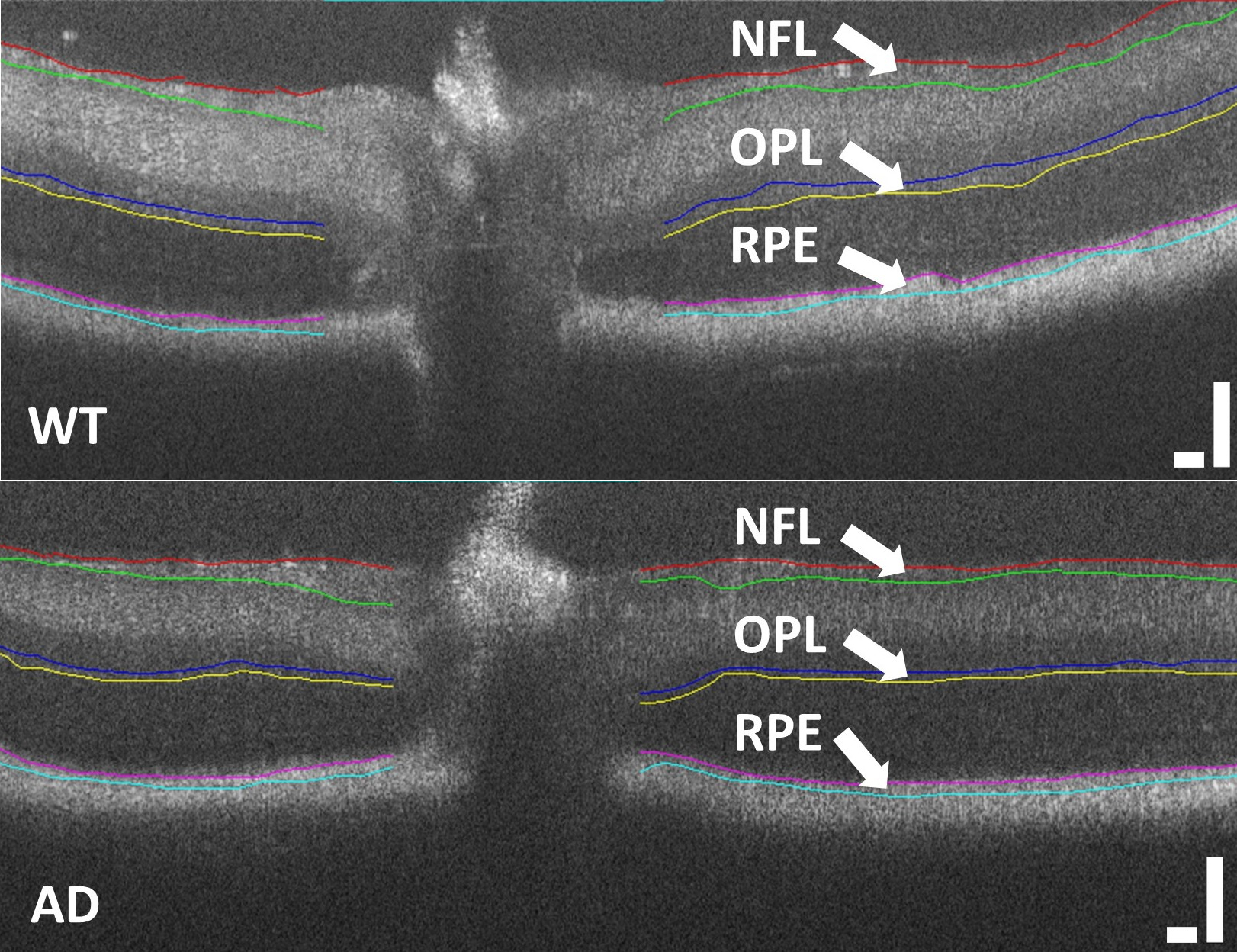 In the new paper, Wax and his graduate student Ge Song show that the topmost layer of neurons in the retina of a mouse model of Alzheimer’s disease exhibit a change in their structural texture. Combined with data on the changes in thickness of this layer, the new measurement could prove to be a more easily accessible biomarker of Alzheimer’s.

“Our new approach can measure the roughness or texture of the nerve fiber layer of the inner retina,” said Song. “It can provide a quick and direct way to measure structural changes caused by Alzheimer’s, which has great potential as a biomarker of the disease.”

OCT is the optical analogue of ultrasound. It works by sending waves of light into tissues and measuring how long they take to come back. While it is an extremely useful imaging technique commonly used to make a wide array of diagnoses, it has limitations.

“The a/LCI measurements complement the thickness measurements to improve the potential utility of more quantitative biomarkers for Alzheimer's,” said Song. “You can’t get textural and structural information about the retina with OCT alone. You need both imaging modalities. That’s the key innovation.”

The researchers are now working to incorporate this added ability into a low-cost OCT system that Wax is developing through a spinoff company called Lumedica. While traditional OCT machines weigh more than 60 pounds, take up an entire desk and cost anywhere between $50,000 and $120,000, Wax’s design weighs four pounds, is about the size of a lunch box and, Wax expects, will be sold for less than $15,000.

The key to Wax’s design is a 3D-printed part that uses symmetry to compensate for mechanical inconsistencies that can arise in traditional OCT devices because of things as small as a subtle shift in temperature. Song also has been working on a 3D-printed rotational prism, allowing the a/LCI to scan the entire retina.

“We’re excited because this research shows a new way of using low-cost OCT technologies outside of simply screening for traditional retinal diseases,” said Wax. “If we can use these devices as a window into early signs of neurodegenerative diseases, maybe we can help people get into an early intervention treatment program before it’s too late.”