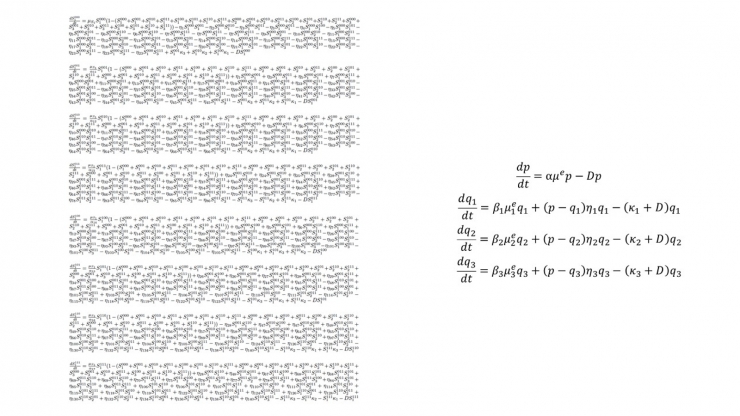 The list of equations required to model three plasmids being swapped in one bacterial species using the old method (left) versus the new, simplified model’s equations (right)

Biomedical engineers at Duke University have developed a new way of modeling how potentially beneficial packages of DNA called plasmids can circulate and accumulate through a complex environment that includes many bacterial species. The work has also allowed the team to develop a new factor dubbed the “persistence potential” that, once measured and computed, can predict whether or not a plasmid will continue to thrive in a given population or gradually fade into oblivion.

The researchers hope that their new model will lay the groundwork for others to better model and predict how important traits such as antibiotic resistance in pathogens or metabolic abilities in bacteria bred to clean environmental pollution will spread and grow in a given environment.

The results appear online on November 4 in the journal Nature Communications.

In addition to the Darwinian process of handing down genes important for survival from parents to offspring, bacteria also engage in a process called horizontal gene transfer. Bacteria are constantly sharing genetic recipes for new abilities across species by swapping different packages of genetic material called plasmids with one another.

“In an examination of just a single bottle of seawater, there were 160 bacterial species swapping 180 different plasmids,” said Lingchong You, professor of biomedical engineering at Duke. “Even in a single bottle of water, using current methods to model plasmid mobility would far exceed the collective computing power of the entire world. We’ve developed a system that simplifies the model while maintaining its ability to accurately predict the eventual results.”

The potential of any one of these genetic packages to become common throughout a given population or environment, however, is far from certain. It depends on a wide range of variables, such as how quickly the packages are shared, how long the bacteria survive, how beneficial the new DNA is, what the trade-offs are for those benefits and much more.

Being able to predict the fate of such a genetic package could help many fields — perhaps most notably the spread of antibiotic resistance and how to combat it. But the models required to do so in a lifelike scenario are too complicated to solve.

“The most complex system we’ve ever been able to model mathematically is three species of bacteria sharing three plasmids,” said You. “And even then, we had to use a computer program just to generate the equations, because otherwise we’d get too confused with the number of terms that were needed.”

In the new study, You and his graduate student, Teng Wang, created a new framework that greatly reduces the complexity of the model as more species and plasmids are added. In the traditional approach, each population is divided into multiple subpopulations based on which plasmids they’re carrying. But in the new system, these subpopulations are instead averaged into a single one. This drastically cuts down on the number of variables, which increases in a linear fashion as new bacteria and plasmids are added rather than exponentially.

With measurements for these variables in hand, researchers can calculate the population’s “plasmid persistence.” If that number is greater than one, the genetic package will survive and spread, with higher numbers leading to greater abundance. If less than one, it will fade away into oblivion.

“Even though the model is simplified, we’ve found that it’s reasonably accurate under certain constraints,” said Wang. “As long as the new DNA doesn’t place too great of a burden on the bacteria, our new framework will succeed.”

You and Wang tested their new modeling approach by engineering a handful of different synthetic communities, each with different strains of bacteria and genetic packages for swapping. After running the experiments, they found that the results fit quite well within the expectations of their theoretical framework. And to go the extra mile, the researchers also took data from 13 previously published papers and ran their numbers as well. Those results also supported their new model.

“The plasmid persistence criterion gives us the hope of using it to guide new applications,” said You. “It could help researchers engineer a microbiome by controlling the genetic flow to achieve a certain function. Or it can give us guidance on what factors we can control to eliminate or suppress certain plasmids from bacterial populations, such as those responsible for antibiotic resistance.”

This research was supported by the National Institutes of Health (R01A1125604, R01GM110494) and the David and Lucile Packard Foundation.