Engineering professor Nimmi Ramanujam describes how she came up with the idea for a device that allows for a speculum-free cervical exam, and what’s next for her lab. 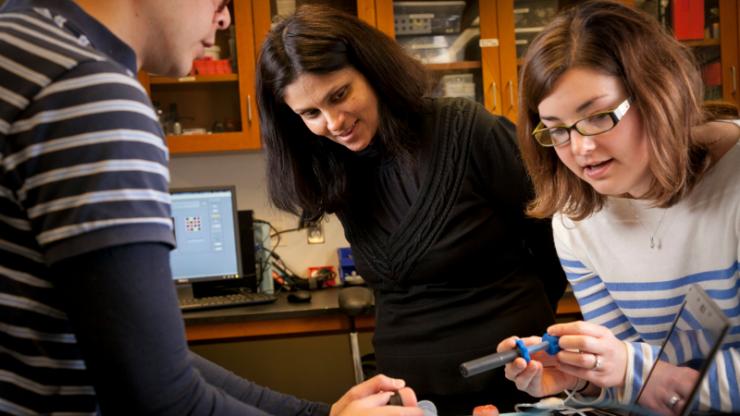 Nimmi Ramanujam (center), engineering professor and director of the Center for Global Women’s Health Technologies, shown in her lab at Duke University

Ramanujam's invention, the Pocket Colposcope, is a portable alternative to the traditional colposcope, a bulky machine used by doctors to examine the cervix for cancer. With the new technology, she wants to create a cervical exam that does not require a specialty clinic or hospital.

A newer generation of the device has a special accessory, called the Callascope, that is shaped like a tampon and allows for speculum-free views of the cervix. This would further expand health services for women by enabling them to use this technology in a self-exam.

The callascope can also be used as a tool for self-discovery (yes, many women do not know what the cervix is, says Ramanujam) and has inspired a multimedia art exhibit on women's reproductive health that will open at the Rubenstein Arts Center at Duke University on February 1, 2019.

What gave you the idea to develop the pocket colposcope?

I was on a trip to Moshi, Tanzania, where I was touring a cervical cancer clinic with a gynecologist. He said that one of the biggest barriers to cervical cancer screening is the metal speculum, a device that is used to part the vaginal walls to look at the cervix. During that visit, that same colleague challenged me to think of a way that we could visualize the cervix without the need for the speculum.

When I came back to the United States, I was speaking with a colleague who happened to show me this tampon-like camera that he was using for a technology that he was developing. Suddenly, the two conversations connected, and the idea formed in my mind – can we create a colposcope to look like a tampon, so that we can insert it into the vaginal canal, rather than having to part the vaginal canal to see the cervix.

How does it work?

The pocket colposcope really just works like a tampon. You insert it, and by placing the tip of the colposcope close to the cervix – about an inch away – you can essentially focus and magnify the cervix much like a traditional colposcope.

We have two versions of the device: One that can be used with a speculum, very much like is done in a clinical setting, and then another version that has a tampon-like shell – called the Callascope – through which the pocket colposcope is simply inserted. It can be used either by the woman herself or by a health provider to allow for visualization of the cervix.

The reason that we have different versions of the pocket colposcope is to allow two types of solutions with the same core technology. In the clinical setting, doctors are already accustomed to looking at the cervix with a speculum. If they choose to do that, then this is a solution they can work with that is cheaper, more portable and easier to use than a traditional colposcope. A traditional colposcope is also not available in many clinics around the world.

What sort of medical problems does the device solve?

Really, in a nutshell, the device brings a complex referral service for diagnosing cervical cancer into the screening setting. Normally, women go to a hospital to get this exam, or they get a substandard exam that doesn't use the colposcope, just the naked eye of a relatively unskilled provider in a community health setting.

This essentially can bring high-end capabilities to a low-resource community and allows women to get an exam that we have become accustomed to in a high-income setting. 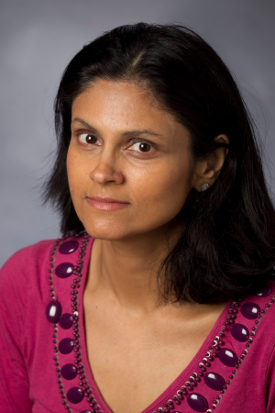 Where is the pocket colposcope being tested?

It has been tested in eight countries, including India, Zambia, Tanzania, Kenya, Honduras and Peru, as well as the United States. We've been able to use the pocket colposcope on more than one thousand women to-date.

How long do you think it will take until it is available for patients outside of the testing groups? What are some of the barriers before this happens?

Recently, we received clearance from the U.S. Food and Drug Administration that allows us to manufacture and sell this technology. We anticipate that we will be able to do this in the next six months, which will allow us to disseminate the device more broadly to community settings where women can get screened.

Do you see the device being used in the doctor's office as well?

I absolutely see this device being used in the doctor's office. In many countries in the world –for example, India – a doctor uses a colposcope as part of the standard of care. But space is at a premium, and colposcopes are expensive.

When I was in India recently, one of the gynecologists told me that she would love to use the device in her clinic. There wasn't enough space for a traditional colposcope. She also said the pocket colposcope would be easier to use than a standard colposcope when she wanted to biopsy a lesion for pathology, because the pocket device would not obstruct her line of sight.

Can you talk about any other projects you and your team are working on?

As we developed the pocket colposcope and tested it in the field, we realized that access to treatment is also a major issue. That inspired us to develop a very low-cost approach for effective ways to treat pre-invasive or invasive cancer once a lesion is identified.

We have created a treatment where ethanol is mixed with a ubiquitous agent routinely used in pharmaceuticals called ethyl cellulose. The mixture is liquid, but creates a gel when injected into an aqueous [water-based] medium like human tissue. Ethanol is known to destroy cells, so by injecting this liquid and converting it to a gel inside the tissue, we can locally target and remove regions of interest, much like a scalpel but without the need for a surgeon. So, we're now working to develop a see-and-treat strategy for cervical pre-cancers using the low-cost therapeutic we have developed.

With the pocket colposcope, it's not just enough to take pictures, but it's also really important to be able to make a decision based on those images. So, the third project, which is sort of an in-between phase of the pocket colposcope and the ethanol gel project, is to be able to automatically decide the diagnosis of a lesion, in order to plan what to do – whether to treat, refer or send a patient home. For that, we're exploring the use of artificial intelligence to "task shift" the expertise of a gynecologist to the community health setting. Through task shifting, health workers are able to take on more complex tasks usually delegated to an expert physician.