With work spanning gene circuits, antibiotic resistance and the mathematical modeling of cellular networks, Lingchong You explores how to best to harness microbes for medical purposes 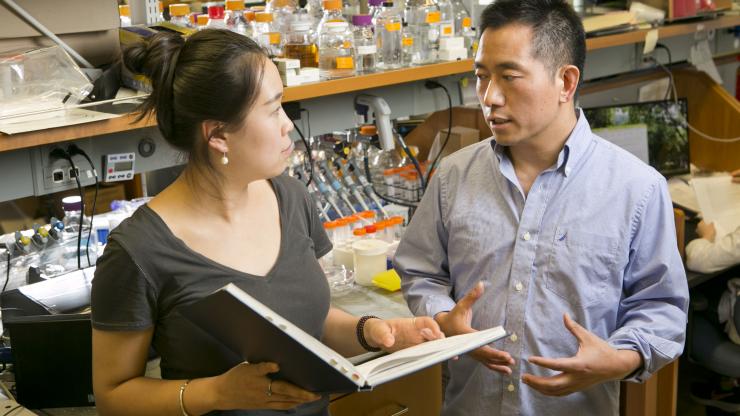 Graduate student Yangxiaolu (Will) Cao speaks with Lingchong You in the You lab space.

When Lingchong You earned his PhD in chemical engineering in 2002, synthetic biology was in its infancy. Yet he was drawn to the field right away.

“Synthetic biology to me is just like programming,” You says. “Every cell is like a computer. In this case the code is in the form of DNA.”

You had spent years building mathematical models of viral infection in graduate school and was ready to do some experiments with living cells. As a postdoctoral researcher in the Caltech lab of Frances Arnold (who won a Nobel Prize last year), he dove into gene circuit design, which involves manipulating the genes of microbes so they will perform a desired function, like producing pharmaceuticals or biofuel.

“I just fell in love with this type of research, integrating both mathematical modeling and experiments,” he says. “As an engineer, you cannot get more ‘engineering’ than this! You introduce stuff into cells and look at how they behave and even predict how they will behave.”

Today, as a professor in Duke’s Department of Biomedical Engineering, You studies and manipulates the dynamics of microbial communities with the goal of developing practical applications in medicine and other fields.

One of his areas of research involves the growing problem of antibiotic resistance.

“We’re facing this antibiotic resistance crisis and there is a huge innovation gap in terms of lack of development of new antibiotics,” You says. “In my view, in the foreseeable future we have to deal with the situation by using the existing antibiotics in a more clever way.”

He and members of his lab have shown that pathogens can pass small bits of DNA that confer antibiotic resistance back and forth among themselves. These DNA bits are called plasmids, and they get shared in a process called horizontal gene transfer.

In a recent project, You analyzed hundreds of bacterial pathogens that show resistance to beta-lactam antibiotics such as penicillin and its cousins. He found that at least 25 percent of the pathogens can transfer resistance among themselves via horizontal gene transfer. In other words, a cell that has never been exposed to an antibiotic can still contain the plasmid that confers resistance to it. Furthermore, horizontal gene transfer happens rapidly enough to keep the plasmid in circulation in a microbial community, even though its presence is costly to an individual cell in the absence of an antibiotic. “That’s why it’s so difficult to eliminate this antibiotic resistance,” You says. “We’re trying to understand how you can control the plasmid dynamics.”

“This is one example of synthetic biology where we designed a genetic program to control cell behavior,” You says. 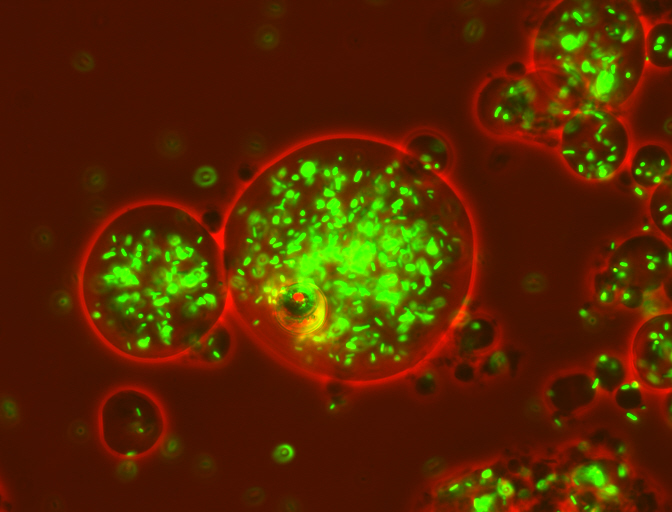 He is working on several other aspects of antibiotic resistance as well. In collaboration with Deverick Anderson, an infectious disease physician in the Department of Medicine, he described the dynamics of a microbial community that is resistant in the face of antibiotic treatment, and compared that to the dynamics in a “resilient” community—one that appears to be resistant but is not. The researchers showed in the lab how a resilient community can be knocked out with first-line antibiotics by using a customized strategy of timing and dosing.

You is also active in another branch of synthetic biology—programming microbes to build patterns or structures. “Look at nature,” he says. “Nature gives us all these living functional materials. I grew into this shape from a single cell. If you think about that, it’s quite amazing. As an engineer, I wonder how can we do something like this?”

In one project, You and colleagues engineered bacteria such that they spontaneously grew into dome shapes. When provided with gold nanoparticles, the bacteria incorporated them into the structures. The researchers then used a pair of these conductive domes to create a pressure sensor in an electrical circuit.

“This is the first time anyone has built a structure in a predictable manner using living cells that carry out a specific function,” You says.

You’s research projects may seem wide-ranging, but they are all driven by the same questions: how do microbial communities behave in space and time, and how can those behaviors be modified?

“Deep down I’m very curious,” You says. “It’s incredibly, incredibly fascinating to me—all of this.”