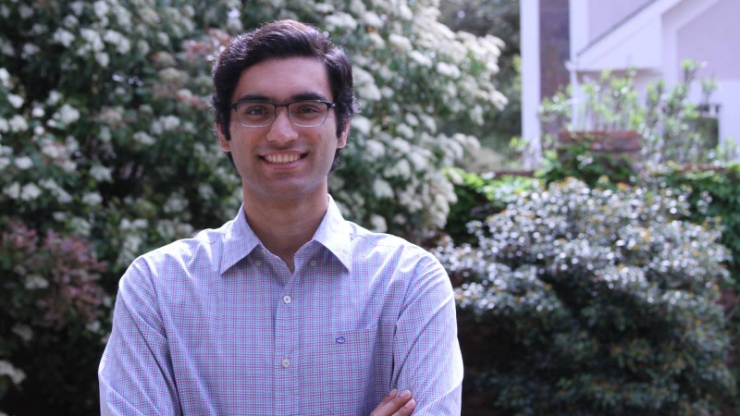 Duke University junior Rohin Maganti is among the 396 undergraduate students from around the country awarded the Barry M. Goldwater Scholarship.

This federally endowed award encourages students to pursue careers in the fields of mathematics, the natural sciences and engineering.

The Goldwater Scholars, announced Friday, were chosen on the basis of academic merit from a pool of 1,343 natural science, engineering and mathematics students nominated by the institutional representatives of 461 colleges and universities nationwide. Virtually all scholars intend to obtain a Ph.D.

Maganti, a biomedical engineering major from Dallas, plans to pursue a medical degree and Ph.D. in cancer biology.

While at Duke, Maganti has worked in the lab of Dr. Scott Floyd under the mentorship of medical/Ph.D. student Drake Edwards, studying the molecular mechanisms that drive DNA damage response pathways with the ultimate goal of improving cancer therapies.  Maganti aspires to become a professor of cancer biology at an academic research institution.

Maganti’s other biomedical engineering projects at Duke include a technology that helps prevent adverse outcomes associated with sleep deprivation in the hospital. The project received the Baquerizo Innovation Grant from the Pratt School of Engineering, and a Bass Connections Independent Research Award in 2019.

Beyond his research interests, Maganti helps lead the Hindu Students Association, is a member of the Duke Raas dance team and completed a summer study abroad project with DukeEngage in the Philippines.

Since its first award in 1989, the Barry Goldwater Scholarship and Excellence in Education Foundation has awarded 9,047 scholarships worth approximately $71 million. Including Maganti, Duke students have won 85 Goldwater scholarships since 1990.