An Old Space for New Ideas

The BRiDGE initiative for faculty, alumni and student startups opens in downtown Durham 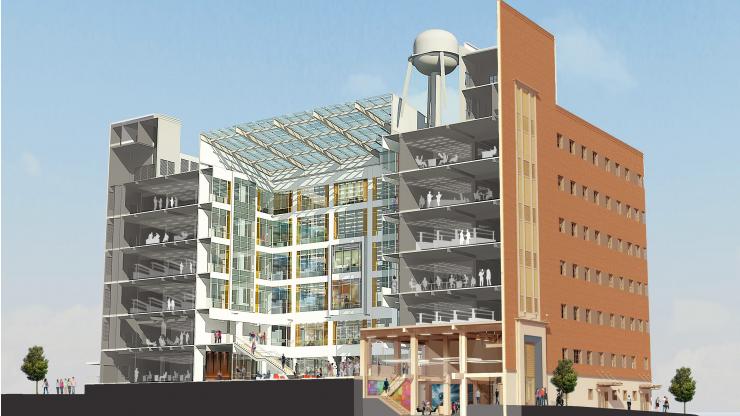 The Chesterfield in downtown Durham, home to the BRiDGE

From the outside, the imposing red-brick Chesterfield building in downtown Durham hasn’t changed much since 1948, when it was built as a cigarette factory for the Liggett & Myers tobacco company. But inside, the building is gleaming with bright new surfaces and endless walls of glass, illuminated by the 3,500-square-foot skylight that sits over an airy new central atrium. 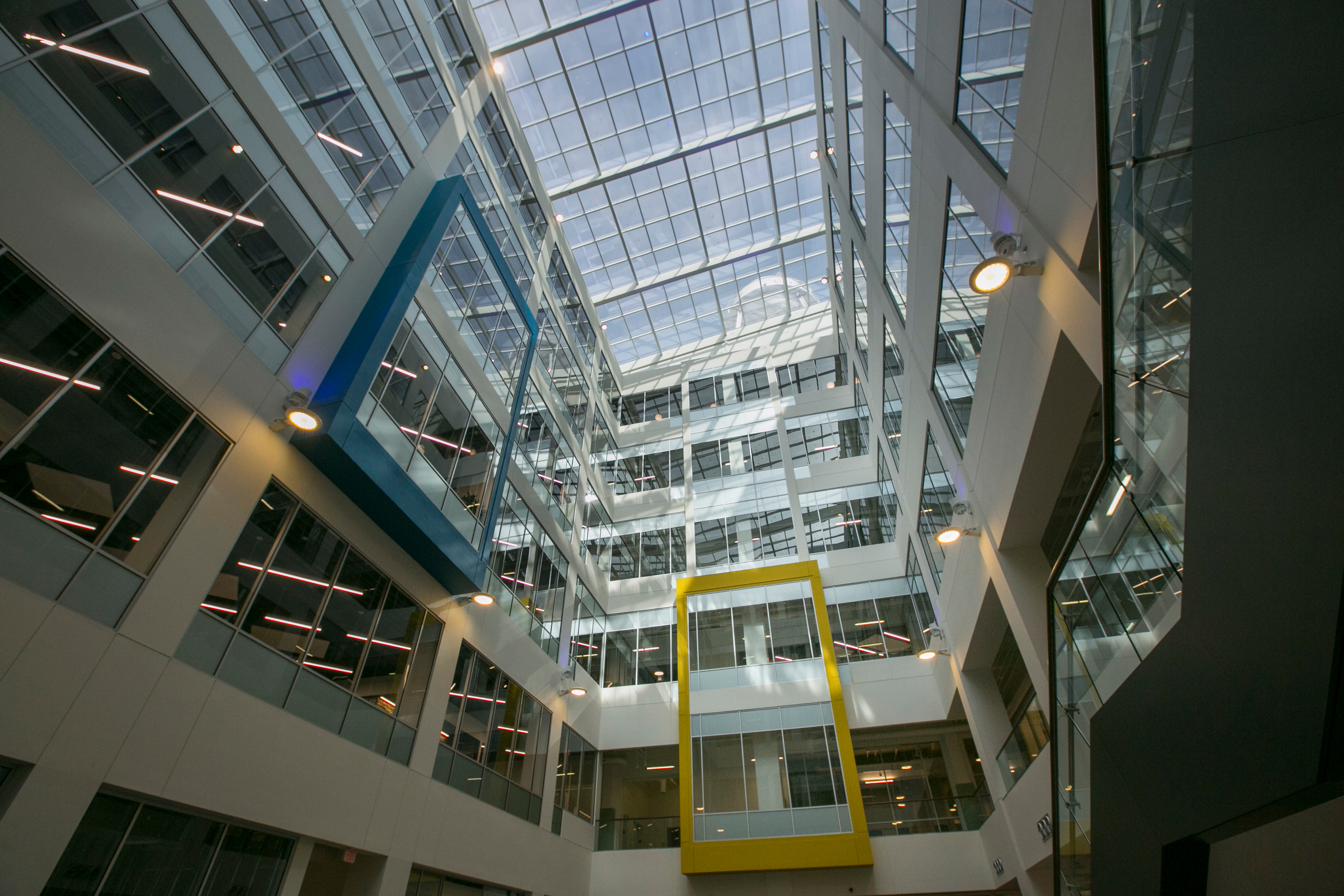 This 21st-century version of The Chesterfield was designed expressly as a hub for biomedical science in Durham, emphasizing shared, open spaces to encourage collaborative work between the bright minds in the building. Re-opened in January 2017, The Chesterfield has filled up fast with numerous startups and labs affiliated with Duke University, which leased about 100,000 square feet in the building for engineering and medical research.

Now, a new initiative will find its home in The Chesterfield: The Bioengineering Research initiative to Develop Global Entrepreneurs, a.k.a. BRiDGE.

The brainchild of Ashutosh Chilkoti, chair of Duke University’s Department of Biomedical Engineering, the BRiDGE program was created to support new bioengineering startups founded by students, faculty, and alumni in Duke BME.

BRiDGE will help Duke researchers and inventors tap into the entrepreneurial talent available to them across Duke, helping them create and refine business plans with training and guidance from Duke’s Innovation & Entrepreneurship initiative and Pratt’s Mattson Family Director of Engineering Entrepreneurial Ventures.

Companies selected to participate in the initiative will move into a 2,000-square-foot space on the fourth floor of The Chesterfield. Modeled on traditional startup incubators, the open space includes a large shared lab area, and rooms with shared equipment; companies lease lab benches and cubicles and have shared access to conference rooms and private offices for calls and small meetings. Mirroring the building that houses it, the renovated space is a medley of the old and the new, with vintage tiles from the building’s tobacco days decorating walls lined with brand-new biomedical lab equipment.

“To me it was clear that there needed to be a physical space that co-located companies in close proximity so they could work with each other to provide moral support and foster a true entrepreneurial community,” says Chilkoti, himself a serial entrepreneur. “BRiDGE provides not only a physical infrastructure but a hub of intellectual expertise for these young startups.” 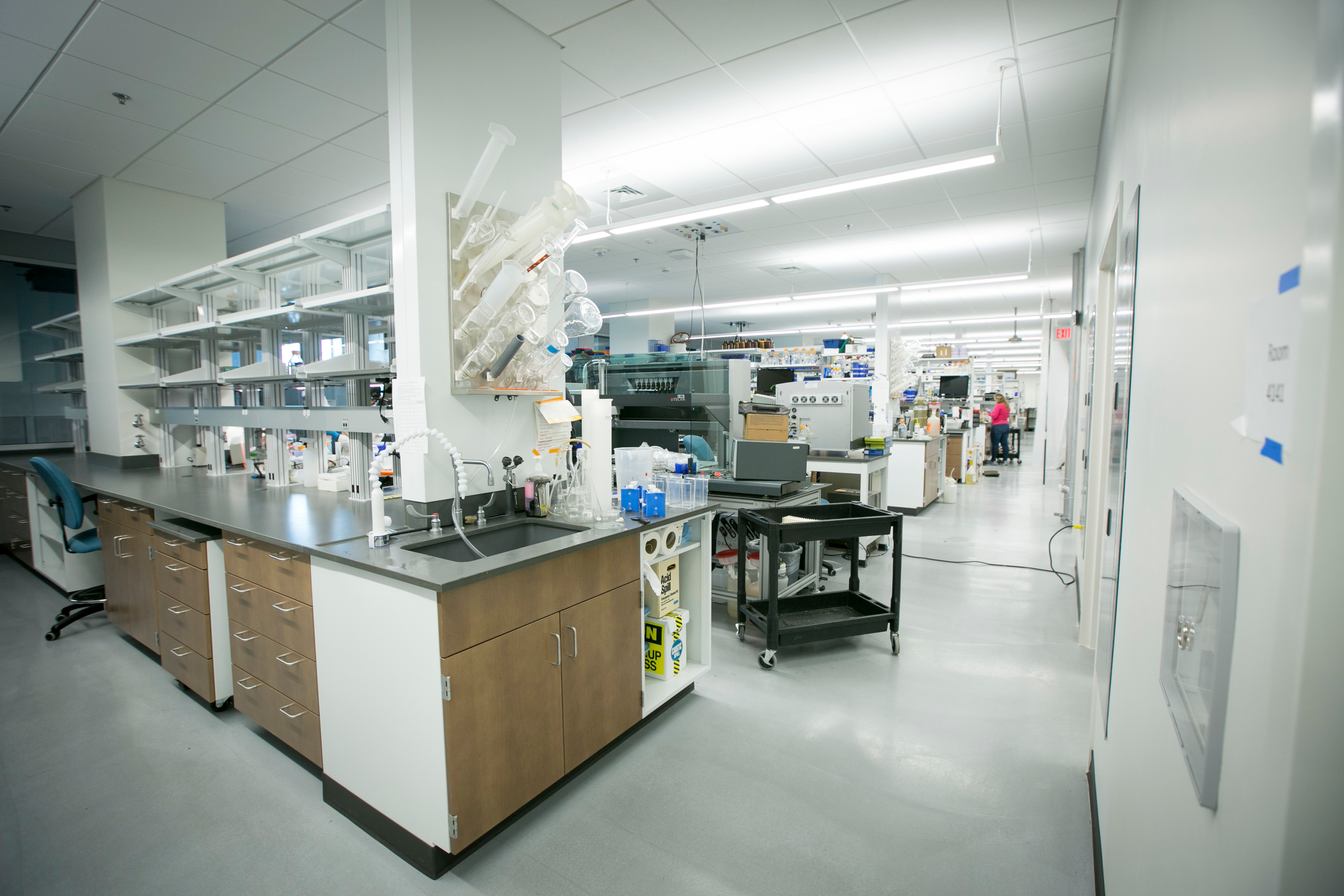 Chilkoti began to pursue this idea shortly after becoming chair of the department in 2013, and in 2017, he partnered with Maria Iglesias de Ussel, a project leader at Duke’s Clinical and Translational Science Institute, to assess the needs of the project. With a faculty and student body full of innovative ideas, he wanted to expand the resources available to would-be entrepreneurs and make it easier for them to succeed.

“At the time, there was nothing like this at Duke,” says Iglesias de Ussel, now the director of operations at BRiDGE. “BRIDGE is more than an incubator, as it has an educational component and we provide entrepreneurial mentorship and expertise.” The initiative gained steam after Alan L. Kaganov (BSME ’60) generously donated funding towards the effort, which also received support from both BME and the Pratt School of Engineering. In November of 2017, seven bioengineering startups were selected to move into the renovated space:Qatch Technologies, founded by postdoctoral fellow Zehra Parlak; Isolere Bio, founded by Chilkoti and recent BME PhD graduate Kelli Luginbuhl; Restor3D and Deep Blue Medical Advances, founded by mechanical engineering and materials science chair and secondary BME faculty member Ken Gall; Gateway Bio, founded by Chilkoti and Angus Hucknall, a senior research scientist in BME; and DMC and AccuBeing, founded by BME faculty members Michael Lynch and Xiling Shen, respectively.

Although BRiDGE is based in Duke BME, this initiative also reflects a growing focus on entrepreneurial work within the Pratt School of Engineering, as evidenced by a number of new collaborative programs created to jump-start entrepreneurship. Among them is Duke MEDx, a program created in 2015 with support from the Provost’s Office, School of Medicine and Duke Engineering to facilitate collaborative research and education between faculty and students in medicine and engineering.

“Our mission with MEDx is to bring together faculty at the early stages of research to create these unique collaborations,” says Gall, the associate director of MEDx. “It’s a tool that works especially well as a starting point for BME entrepreneurs at Duke University, because they get a good sense of how their ideas can be implemented into clinical use.” 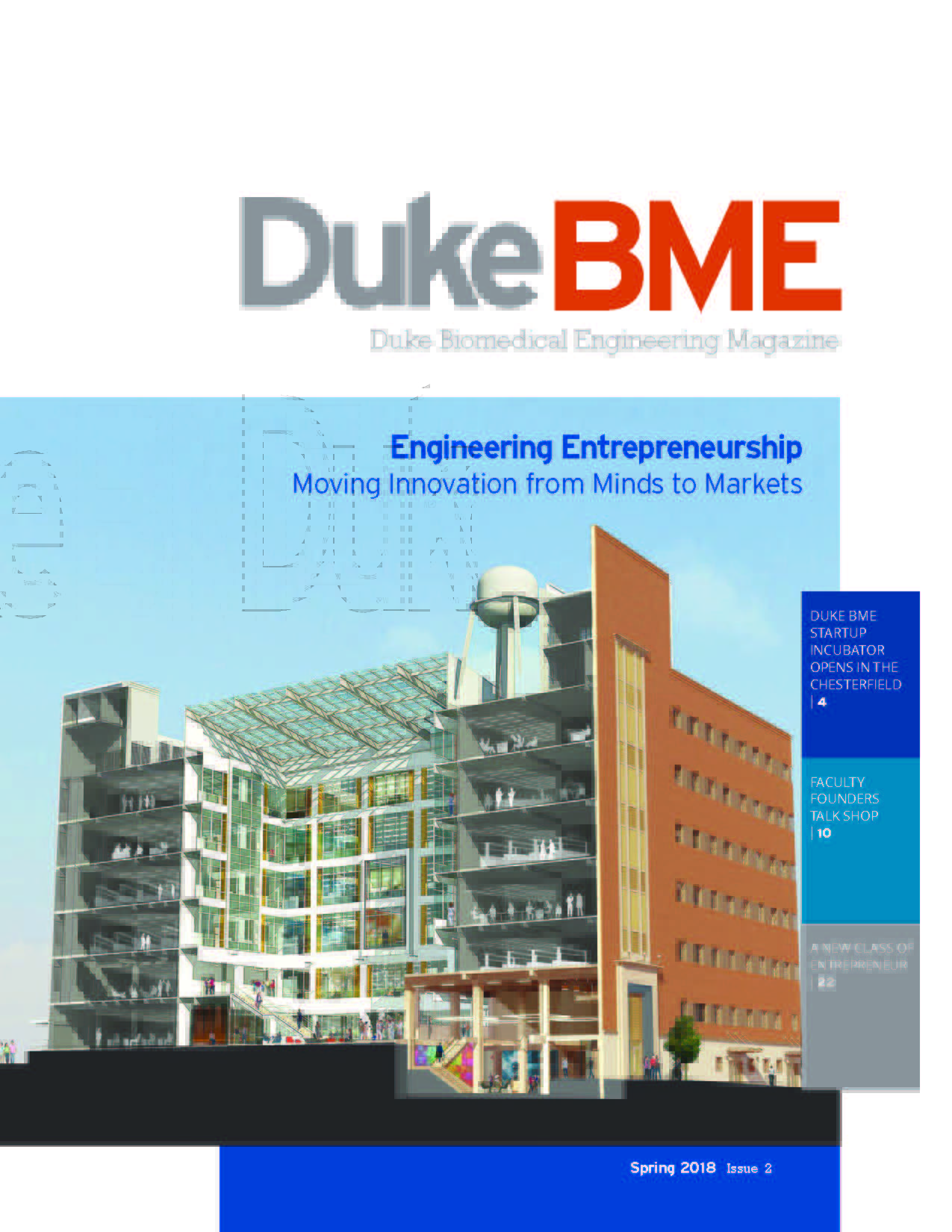 Faculty, graduate students and research staff in BME can also participate in the Duke-Coulter Translational Research Partnership. Established in 2006, the program supports collaborative translational research that addresses unmet clinical needs and leads to improvements in healthcare and to commercial products. So far, the partnership has awarded more than $8 million in funding to more than 39 projects, and these have subsequently gone on to attract more than $489 million in follow-on funding from grants or angel investments.

This decade-spanning partnership between Duke’s medical and engineering schools has resulted in numerous innovations, patents, and startups, and Chilkoti hopes to build on this success through BRiDGE.

“We thought it would make sense to have a pipeline that could begin with the Coulter Translational Partnership to develop nascent bioengineeringtechnologies that then develop into a startup company that is located in the physical space provided by BRiDGE. BRiDGE’s mission is to help these startups travel safely across the valley of death and into functional companies,” says Chilkoti. "With this new space, researchers will have the resources to carry out the early development work that is essential to attract funding from angel networks, venture capitalists, and the federal government through SBIRs and STTRs.”

One of the most recent additions to Duke’s entrepreneurial efforts is Bill Walker, a Duke Engineering alumnus and entrepreneur who joined the school in 2016 as the school’s first Mattson Family Director of Entrepreneurial Ventures. Working closely with the Duke Innovation & Entrepreneurship Initiative and the Bass Connections Program, Walker helps Duke Engineering faculty and students assess business opportunities for commercializing their ideas and develop new companies.

With the opening of BRiDGE, Walker’s role as a mentor to engineering entrepreneurs will be expanding, as he will provide guidance to the bioengineering companies.

"My role is to be the go-to person in that space and to help them find deeper resources and provide strategy,” says Walker. “My job isn’t to tell them what to do, but to share my experiences and give them a clear way to move forward.”

Already, there are plans to expand the program to provide more educational opportunities for engineering master’s and PhD students interested in entrepreneurship. “Bill and I have launched a summer internship program in BRiDGE for Duke students,” says Chilkoti. “Ultimately we want these summer interns to work with these companies and have a hands-on learning experience in entrepreneurship that is still relevant to their bioengineering interests.” 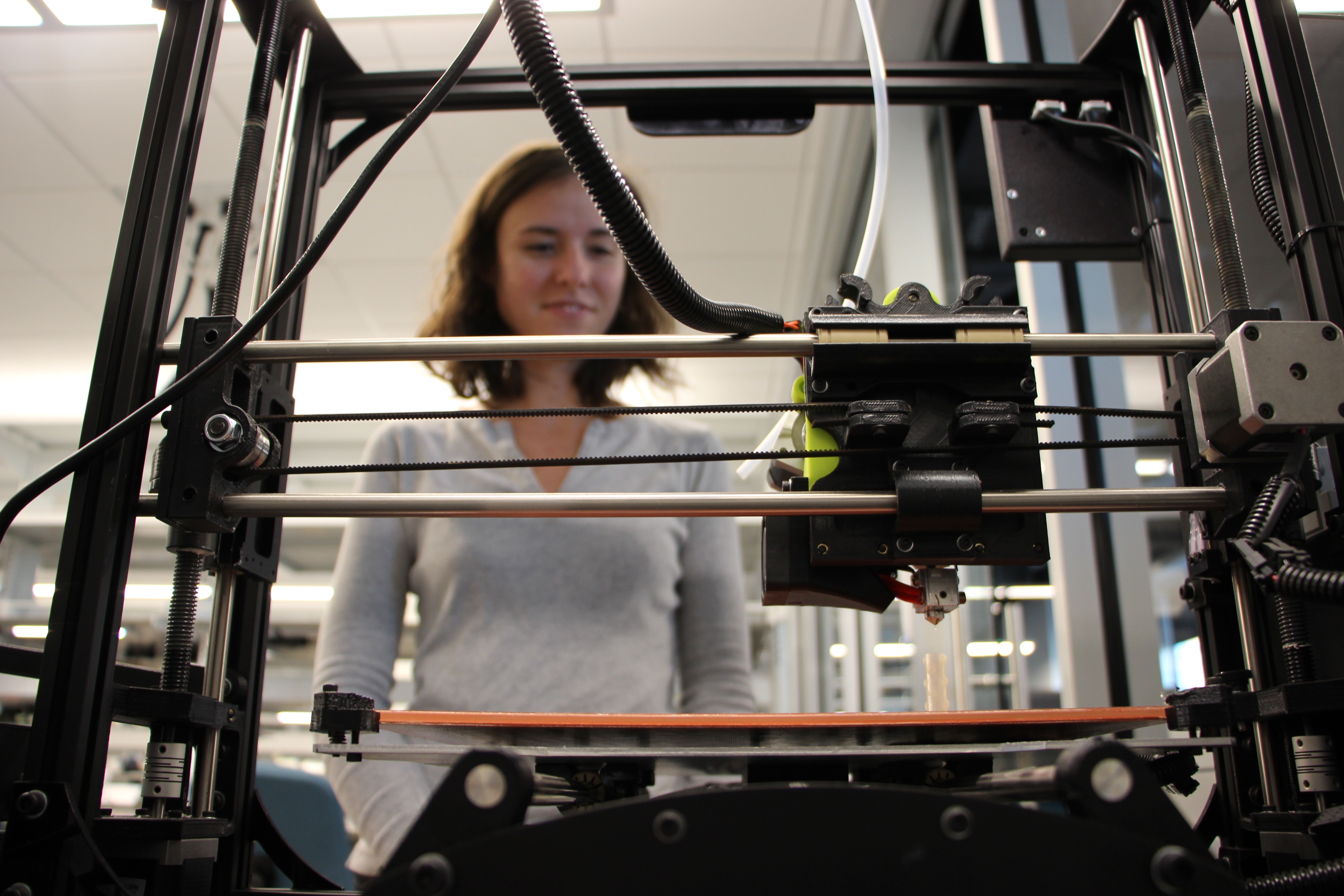 For Chilkoti, The Chesterfield was a prime location for BRiDGE, placing the startups in the center of a busy and growing downtown area. In the last five years alone, more than 3,500 Duke employees have moved into the booming entrepreneurial hubs in downtown Durham, including the American Tobacco Campus, the American Underground, the Carmichael building and the Bullpen, the focal point of Duke University’s innovation and entrepreneurship efforts. Already, Duke faculty and staff work in more than 1.3 million square feet of space in downtown Durham, and there are plans to take on more than 200,000 square feet of space in new buildings already under construction by 2018.

The growth of downtown Durham can be seen in real time from BRiDGE, where large windows frame multiple cranes at work placing together the skeletons of towering glass skyscrapers and renovating other historic buildings nearby. For researchers who will move into the space, its location at the center of a growing city and the influx of entrepreneurs is one of the many benefits of The Chesterfield.

“The space is a brilliant concept and creates a sense

of community,” says Gall. “When you interact with people who work toward similar problems and challenges, that gives you a sense of confidence in your work. I believe BRiDGE in combination with Duke Angel Network will be a major factor in the success of Duke’s bio-focused startups.”

New opportunities in a new space are just what Chilkoti had in mind. “BRiDGE was created to lower the activation barrier for people who want to launch innovative biomedical companies,” he says. “We want to empower the local Duke BME community to pursue new and exciting ideas.”

Mike Lynch—DMC: Based on a novel process that will allow researchers to scale up and streamline the production of molecules used in flavors, fragrances, agricultural chemicals and other commercial products.

Zehra Parlak—Qatch Technologies: Based on a new technology that can be used to measure blood coagulation.