Duke BME formalizes a new double major, offering a curriculum at the intersection of computer science and biomedical engineering 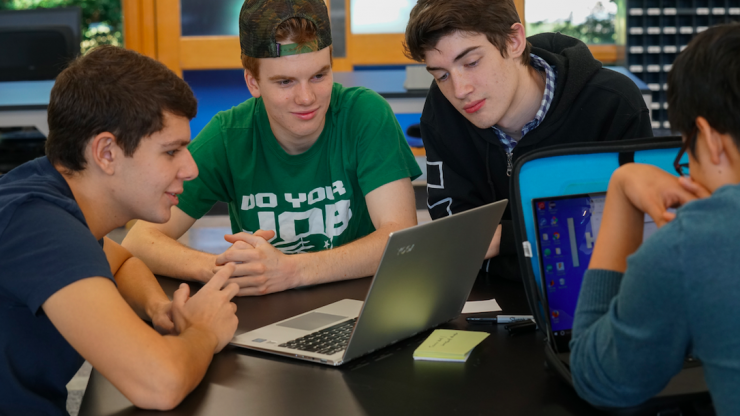 Undergraduate students in biomedical engineering will now have a streamlined path to graduate with a degree in both BME and computer science. The new curriculum draws on longstanding collaborations between both departments, and it establishes a clear map to graduation for students interested in careers in biotechnology and at companies like Google, Amazon and Microsoft.

“Duke BME has an established curriculum for students wanting to double major in mechanical engineering, civil and environmental engineering and electrical and computer engineering, but this is the first formal curriculum for a double major outside of Duke Engineering,” says Libby Bucholz, an assistant professor of the practice in Duke BME. “In the past there hasn’t been a course checklist if you want to major in both BME and CS, so students have had to make compromises about the courses they can take or they’ve needed to overload their schedules. This new program is designed to resolve those issues and simplify the process for our students.”

“When I recommended the BME and CS double major option to students in previous years, I had to give the caveat that arranging all the required courses would be challenging,” says Teresa Mao, BSE’20. “I’m glad they are announcing this official graduation roadmap so it’s easier for students to pursue the double major if they are interested, without stressing about overloading their schedules each semester.”

Bucholz and Marc Sommer, who lead the undergraduate program in Duke BME, are optimistic that the new double major will be a great option for students who are interested in medical software and technology, but aren’t necessarily drawn to medical device design.

“In the past we’ve seen that students who pursue the BME and ECE double major tend to want an experience that lends itself towards medical device design or hardware design, and they’re interested in developing those relevant engineering skills,” says Sommer. “But the BME and CS program will cater to students more interested in the science behind optimizing algorithms and machine learning, who want to pursue jobs at Google, Apple or tech companies that may have a health component rather than a large health focus.”

“The majors complemented each other really well, and it gave me a great understanding of health care and health systems,” says Suyash Kumar, who graduated in 2016 with degrees in both BME and computer science. “It’s been enormously helpful in my current role at Google Health, where I work at the intersection of computer science and health care. I’m really glad I did the double major, and I can’t recommend it highly enough.”