Researchers in the You lab defined a new mechanism for one of main reasons why antibiotics lost their ability to kill bacteria.

DURHAM, N.C. -- Many antibiotics can lose their ability to kill bacteria – Duke University bioengineers believe they can explain one of the reasons why.

Using a combination of molecular biology and mathematical modeling, the researcher defined a new mechanism for one of main reasons why antibiotics lost their ability to kill bacteria. The so-called “inocolum effect,” a phenomenon well known by physicians, states that for any dosage of antibiotic, its ability to kill bacteria decreases as the bacterial population rises. This effect occurs in most of the antibiotics used today.

The researchers also examined how this effect could influence the efficacy of treatment depending on the timing and frequency of antibiotic use.

“Taken together, our results contribute significantly to the understanding of how bacterial populations use non-genetic mechanisms to tolerate antibiotic treatment,” said Lingchong You, biomedical engineer at Duke’s Pratt School of Engineering  and a member of Duke’s Institute for Genome Sciences & Policy and the school's Center for Systems Biology. “Importantly, we unraveled the overlooked implication of this mechanism for the effectiveness of antibiotic treatment over time.” 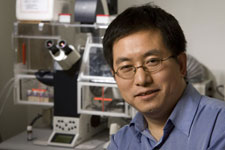 The results of the Duke research in the journal Molecular Systems Biology. Former graduate student Cheemeng Tan and former post-doctoral associate Robert Smith were co-first authors on the paper.

“Antibiotics have been a mainstay of treatment for diseases caused by bacteria. However, they are falling victim to their own success,” You said. “Decades of overuse and misuse are causing a major crisis, in that bacteria have developed resistance to almost all antibiotics. Just as importantly, they can become resistant at an alarming rate, considering the timescale at which new antibiotics can be developed.”

In order to develop new antibiotics, You said researchers need a better understanding of the many ways bacteria can develop resistance to antibiotics.

You studied bacteria whose ribosomes are targeted by certain classes of antibiotics. Ribosomes, structures residing within all living cells, are crucial in the ability of DNA to ultimately produce proteins.

“In our experiments, the inoculum effect can be explained by the bistable inhibition of bacterial growth,” You said. “Our results demonstrate that a critical requirement for this bistability is the fast degradation of the ribosome induced by the antibiotics.”

Bistability describes a state in which an individual cell or population has the potential to live in two states simultaneously, with its actions depending on which “state” it is in when stimulated. This phenomenon is not unique to biology. In electrical engineering, for example, bistability describes the functioning of a toggle switch, which can assume either one of two positions -- on or off.

The rapid degradation of the ribosomes led to a delayed recovery of bacterial growth after treatment, which has critical implications for determining the timing of antibiotic use for effective treatment of bacterial infections, You said.

“The combination of the inoculum effect with the delayed recovery of ribosomes could lessen the effectiveness of periodic antibiotic treatment,” You said. The timing can be a matter of minutes to days, with the treatment efficacy diminishing drastically at intermediate dosing periods.

“This mechanism has neither been predicted nor demonstrated in the literature, despite extensive theoretical studies,” You said. “Given our results and proposed mechanism, the failure to account for the differential recovery dynamics is the critical omission in the previous computational studies.”

Interestingly, this work was inspired by an earlier study by Tan on how the host physiology can influence, and be influenced by, the synthetic gene circuits inside a cell. The researchers found the mathematical principles underlying this research were almost identical to that of antibiotic resistance.

You’s research is supported by a National Science Foundation CAREER award, the National Institutes of Health, a DuPont Young Professorship, and a David and Lucile Packard Fellowship.