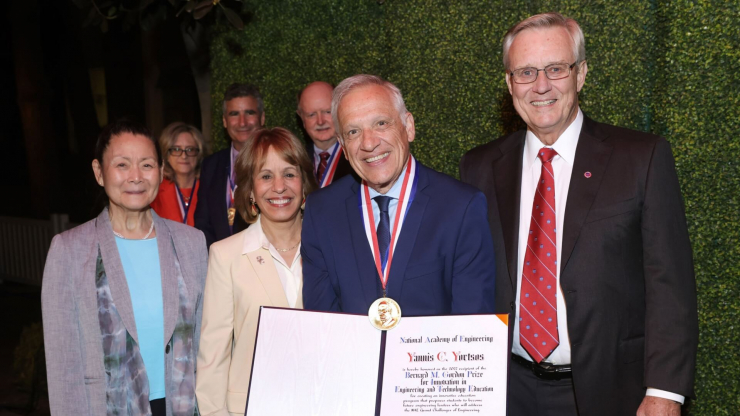 To date, the program has been adopted at 97 engineering schools and produced 1,760 engineers uniquely equipped to tackle humanity's most pressing global problems.

On May 6, the program's four founders received the  National Academy of Engineering's (NAE) Gordon Prize—the nation's most celebrated honor for engineering education.

The NAE cited the founders for "creating an innovative education program that prepares students to become future engineering leaders who will address the NAE Grand Challenges of Engineering."

The founders of the NAE Grand Challenges Scholars Program, including a Duke dean of engineering, were honored for "creating an innovative education program that prepares students to become future engineering leaders."

The presentation was made at USC Viterbi on May 9. Dean Yortsos accepted the prize on behalf of the four founders.

Since 2001, the National Academy of Engineering has awarded the Gordon Prize to educators making exceptional advances in engineering and technology education.

In the program, scholars focus their research experience on exploring solutions to one of the  NAE's 14 Grand Challenges for Engineering in the 21st Century—which range from making solar energy more economical to creating better medicines.

Students can receive the distinction of being an NAE Grand Challenges Scholar by demonstrating five competencies:

In practice, the Katsouleas NAE Grand Challenges Scholars Program at Duke—named to honor the founding former dean, is structured so that a scholar's chosen challenge permeates every aspect of their academic trajectory and informs their scholarship, interests and passions. In the year of their undergraduate commencement, students present a portfolio of their accomplishments and receive the distinction upon their graduation.

Nationally, in the Class of 2022, there are over 300 undergraduate NAE Grand Challenges Scholars—including 11 at Duke. 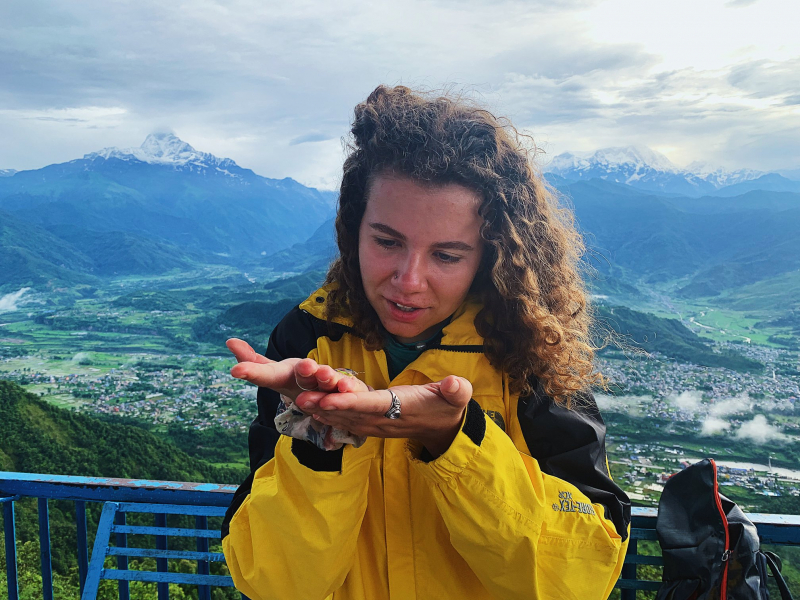 Rachael Lau, who graduated in 2020 from Duke Civil & Environmental Engineering (CEE) as a Katsouleas NAE Grand Challenges Scholar, spoke about her own experience with the program at the award presentation.

"As an undergraduate, I had a difficult time in the traditional classroom environment. I became an engineer because I love people and solving problems, but many aspects of my education were making me second guess my ability to be an engineer," Lau said. "It wasn't until I learned about the Grand Challenges Scholars program and what it stood for that I really felt connected to my place in engineering."

Lau tackled the challenge of equitable access to safe drinking water and sanitation, joining Duke Engineers for International Development student organization and traveling to Madagascar after her sophomore year to advance work on a multi-year water pipeline project.

"While I was there, I witnessed how the natural environment directly alters the quality of life of individuals—specifically through disaster—and that's when it all clicked," Lau said.

Building her educational experience around the framework of disaster engineering took  Lau to Jiangsu in China to study the effects of climate change on air and water quality. This spurred her to form a research collaboration between Duke and the Institute of Engineering-Pulchowk in Nepal, which focused on earthquake early warning systems. Lau now studies geohazard modeling and mitigation as a Duke PhD student in the lab of geomechanics expert Manolis Veveakis.

As a recently named Fulbright Research Scholar, Lau will conduct the next year of her research in Kathmandu. "The NAE Grand Challenge Scholars Program brought me to my passion and my people," she said.

"As we face some of humanity's greatest challenges in the decades ahead, inspiring students on how they can save lives and make the world a better place is a very concrete way that we can use knowledge in service of society and inspire the next generation of leaders."

Making the World a Better Place

Both the Grand Challenges and the NAE Grand Challenges Scholars Program emanated from the important belief that human ingenuity and innovation, if properly summoned and nourished, can solve the grand challenges of our times, Yortsos said.

Duke CEE Professor of the Practice David Schaad, who directs the Katsouleas NAE Grand Challenges Scholar Program at Duke, said: "Having students be able to follow their passions and focus on such important and tangible challenges becomes a transformative experience for so many of the scholars. It has been exciting to see how their research dovetails with their summer experiences and on-campus interests to fully embrace the change they can create in society and themselves. As we face some of humanity's greatest challenges in the decades ahead, inspiring students on how they can save lives and make the world a better place is a very concrete way that we can use knowledge in service of society and inspire the next generation of leaders."