BME's Ashutosh Chilkoti and Lingchong You receive a $7.5 million MURI award from the Department of Defense 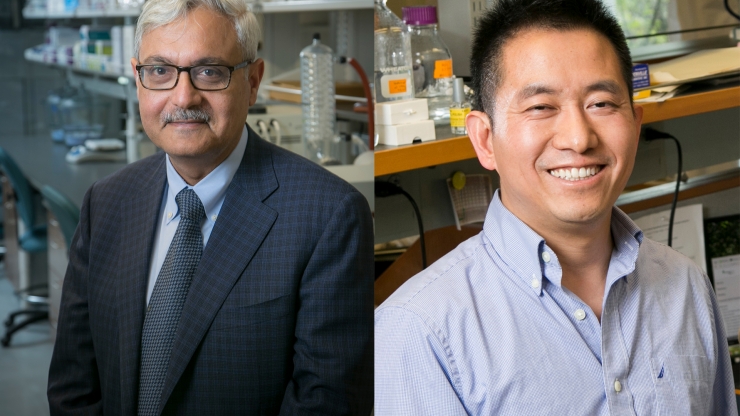 This story was originally published on the Duke Center for Genomic and Computational Biology Website.

Lingchong You, Ph.D., and Ashutosh Chilkoti, Ph.D., are collaborating with researchers at Washington University in St. Louis, Princeton University, and University of North Carolina on a five-year, $7.5 million Multidisciplinary University Research Initiative (MURI) award from the Department of Defense.

“For the longest time, the central dogma of biology was that structure equals function,” Chilkoti said. “But some proteins lack that structure, so they had been considered unimportant.” Research now, though, is showing that is not the case.

These blob-like proteins have intrinsically disordered regions that go through phase transitions and can form membraneless organelles – squishy, liquid-like droplets that have defined phase boundaries but no delimiting membranes. Researchers are finding more proteins with this phase behavior linked to their function in cell.

The team wants to know how these droplets are controlled by the surface properties of the droplet. The overall goal is to uncover the fundamental design principles that will allow them to design and engineer novel, synthetic and membraneless organelles.

“What kind of inspiration can we draw such that we can create synthetic systems that take advantage of phase transition to program cell behavior for interesting circuits for practical applications?” You asked.

Chilkoti works with artificial proteins and polypeptides and can make proteins go through phase behavior. You has been building circuits using existing parts as part of his research, but now, Chilkoti wants to build You circuits using new parts for gene circuits that are fueled by phase transitions. This will allow them to make a cell do something better or new.

One example of its utility could be making bacteria more sensitive to antibiotics, or in a world where climate change is going to impact the way we live and grow crops, they could build a circuit that would make plant cells more heat-tolerant. The opportunities seem limitless.

“This is one of the new frontiers in biology,” Chilkoti said. “This is going to be a completely new way of doing synthetic biology.”