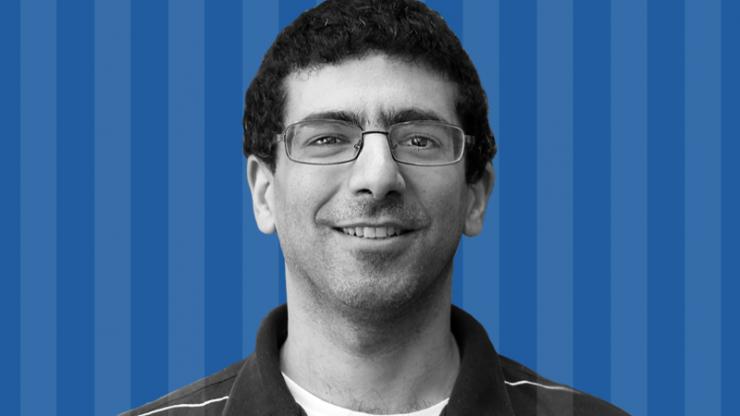 Michael Rizk joined Duke University’s Department of Biomedical Engineering as an assistant professor of the practice in July 2019. With a decade of teaching complex engineering skills to undergraduate students at the University of Pennsylvania, Rizk joins a growing team of engineering educators shaping both Duke BME’s curriculum and Duke Engineering’s signature First-Year Design Experience.

This new role is a homecoming for Rizk, who earned his PhD from Duke BME in 2008. After studying electrical and computer engineering as an undergraduate at the California Institute of Technology, Rizk was interested in translating his technical skills to a new arena.

“I knew I wanted to pursue grad school, but if I continued in electrical engineering that would have likely involved building something like a faster computer. I thought applying those same skills and background to better understand the human body would be more fascinating,” says Rizk. “I reasoned that building a faster computer could indirectly help a lot of people, but building an electrical device like a pacemaker would have a more immediate positive effect.”

This interest led him to the lab of Patrick Wolf in Duke BME. There, Rizk helped build a fully implantable neural recording system. More recent iterations of this device, Rizk said, can send information recorded from neurons to a remote tool, like a neuro-prosthetic or other brain-controlled device.

Although he found this research fulfilling, Rizk discovered that he also greatly enjoyed working directly with students.

“I had never done any teaching before, but my time as a TA sparked an interest in exploring the teaching side of biomedical engineering,” says Rizk. “As I was finishing up my PhD in the fall of 2008, it turned out that there was a need for someone to teach courses in BME that following semester, so I stayed on as an instructor. That confirmed to me that teaching was a direction I wanted to explore, and I ended up getting a position at the University of Pennsylvania as a lecturer in the bioengineering program.”

During his decade at UPenn, Rizk taught a range of undergraduate courses, including senior design and the introductory bioengineering course. Rizk is looking forward to using his background as an engineering educator and Duke alumnus to create a personalized engineering experience for undergraduate students.

Rizk will hit the ground running as school begins in August, leading two sections of the First-Year Design program and working closely with program director, Ann Saterbak to guide students as they create their community-based projects. His role will grow the following semester, where he’ll also teach a course specifically for biomedical engineering students.

“In my previous position I was always reading feedback from engineering students about how they wanted to get more hands-on design experience early on, so it’s exciting to be able to fulfill that need through Duke’s first-year design program,” says Rizk. “Beyond imparting technical skills, I’m looking forward to the opportunity to help new students figure out where they belong and what’s important to them as they explore college and the different career paths they could follow as engineers.”

This new role seems like a full-circle moment for Rizk.

“I think it was always in the back of my mind to come back to Duke. My wife and I loved it here, so when this opportunity came up we jumped on it,” says Rizk. “This new role combines a lot of things that I’ve been interested in, where I get to work with students to do something meaningful and create solutions that can directly benefit large populations of people.”