MEDx: An Engine for Collaboration and Innovation 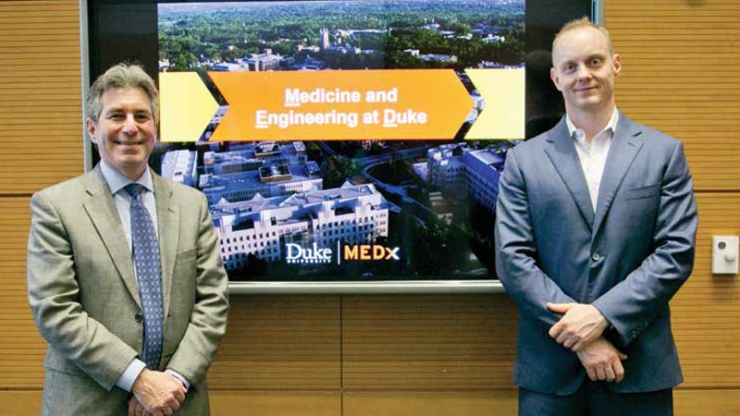 Geoffrey Ginsburg, director of MEDx, stands to the left of MEDx co-director Ken Gall, chair of the Department of Mechanical Engineering and Materials Science

Duke University is well-known for its successes in research, innovation and entrepreneurship. To further accelerate this already innovative and cross-disciplinary environment, the School of Medicine and School of Engineering, with support from the Provost's Office, recently teamed up to launch Duke MEDx. The initiative supports joint research and education between faculty and students in the two schools with the ultimate goal of finding new ways to improve medical research and healthcare.

"Duke's heritage of collaboration between engineering scientists, medical scientists and clinicians set a foundation for the creation and flourishing of MEDx," says Geoffrey Ginsburg, director of the program and professor of medicine and biomedical engineering. (Ken Gall, chair of Mechanical Engineering & Materials Science, is MEDx's associate director.)

"The main idea behind MEDx was to let the investigative community come up with great ideas at the intersection of medicine and engineering by bringing people together to brainstorm within the colloquia and research opportunities that MEDx has created."

Professor Ginsburg goes on to describe this initiative in terms of layers, saying it involves "Layers of students interacting between life sciences and engineering sciences. Layers of faculty interacting, [which] has created a tremendously vibrant community. The stage is set for Duke to have an amazing impact on this space. In a very short period of time, we have created a buzz."

MEDx's environment of innovation and creativity is fueled by collaboration and team science, which the program supports by providing funding for new joint research projects, educational opportunities for engineering and medical students and trainees, and even "social engineering" lunches and a weekly MEDx café to bring people together across the schools to discuss ideas.

Professor Ginsburg says, "We've become sort of a magnet. People come to MEDx because they want to talk about their ideas. A lot of the traffic is from students, and MEDx helps facilitate collaborative opportunities. We've already had a significant catalytic function accelerating and augmenting programs that have already existed."

This collaboration has certainly paid off, as Professor Ginsburg proudly gives examples of MEDx projects working on important issues like improving or creating systems involving pediatric blood filtration and early cancer detection. And that's just to name a few.

"They're all great ideas," Professor Ginsburg says. "A good many of them will make it to clinical use."

MEDx is already paving the way for further improvement in the world of medicine and engineering. Seeing that MEDx is only one year old, Professor Ginsburg has plans for its future, saying, "We will continue to foster interactions between the engineering, clinical and scientific community and the medical school through a number of social events, symposiums and workshops to shine the light on the work that these great scientists and students are doing."

Despite the clear objectives and path forward, many opportunities remain.

"Now can we go after something that may be bigger?" says Professor Ginsburg. "Can we organize in a way that will really define Duke's unique attributes in this space? As tools and technologies that are developed through the MEDx program begin to evolve, we really want to see them move out into the real world. How do we get them commercialized?"

Being a successful expert in the areas of medicine and science himself, Professor Ginsburg begins to hypothesize potential answers to these questions. "We are going to work with the Office of Licensing & Ventures, Duke's Innovation & Entrepreneurship program, and Pratt's Office of Engineering Entrepreneurial Ventures to connect with the entrepreneurial community to help create a path through which MEDx innovations can actually be put out into the real world," he said. "We want to create an engine delivering innovation in research to the clinic."

Along with his contributions to MEDx, Professor Ginsburg has been conducting his own research in the field of applied genomics and precision medicine. "MEDx and applied genomics and precision medicine converge in the areas of data analytics and diagnostics," says Professor Ginsburg. "I have worked extensively with ECE (electrical and computer engineering) faculty on statistical methodologies to improve disease diagnosis and treatment." He notes that the goals of precision medicine are to have an impact on public and individual health and are well in line with MEDx's ambitions to see the union between medicine and engineering impact health.

Professor Ginsburg has helped with MEDx's development, but says he has also benefited from its development in meaningful ways. "I have always been somebody who likes to make connections. Making connections between the campus and with people outside of Duke and seeing their collaborations and their science flourish has been very gratifying to me," says Professor Ginsburg, who ends with a statement that well defines the energy and fundamental purpose behind MEDx. "I have an itch of wanting to see innovation to occur rapidly.... first to have it simply occur and then to have it occur more rapidly." Arianna Carr is a freshman majoring in biomedical engineering.

"I have always been somebody who likes to make connections. Making connections between the campus and with people outside of Duke and seeing their collaborations and their science flourish has been very gratifying to me," says Professor Ginsburg, who ends with a statement that well defines the energy and fundamental purpose behind MEDx. "I have an itch of wanting to see innovation to occur rapidly.... first to have it simply occur and then to have it occur more rapidly."

Arianna Carr is a freshman majoring in biomedical engineering