Zooming in on a Tiny Parasite

The malaria parasite is an expert when it comes to destroying red blood cells.

When a human is bitten by an infected mosquito, the parasite enters the bloodstream and travels to the liver, where it multiplies before it’s released back into a patient’s bloodstream and begins its quick work of annihilating red blood cells from the inside out.

According to the World Health Organization, there were more than 229 million cases of malaria across the globe in 2019, and more than 400,000 people died from the disease.

It’s a significant amount of destruction for a parasite that measures less than one millionth of a meter.

Although malaria is exceedingly common, it’s not the easiest disease to diagnose. When a doctor suspects that a patient has malaria, they’ll typically take a blood sample to track down the tiny parasite with a microscope.

Although visual examination is considered the gold standard to confirm a diagnosis, signs of the malaria parasite are easy to miss––both trained physicians and current computer algorithms have a tough time at accurate identification. Complicating matters, high-resolution microscopes only allow clinicians to examine a few dozen cells at a time, and they’ll often need to examine a few thousand cells before they find any sign of the parasite, which can take tens of minutes per slide.

But Roarke Horstmeyer, an assistant professor of biomedical engineering at Duke University, aims to make this process faster and more accurate through the creation of new optical tools and image post-processing methods.

“These limits affect areas across medicine, from the pathologist who cannot quickly measure an infection in blood cells to neuroscientists who can only use light to monitor neural activity along the top surface of the brain,” he says. “Our lab tries to address these shortcomings by coming up with new optical approaches that can give us a new way to see and study biological systems, as well as new algorithms that can assist us with these challenging tasks.”

One of the lab’s largest projects involved the creation of a microscope that uses machine learning to automatically adapt its lighting to the best settings to diagnose diseases, like malaria.

“We’re really excited about using machine learning for optimizing optical systems,” says Horstmeyer. “Nature has evolved thousands of types of eyes for different animals, and we were curious if we could re-create this evolutionary process with a computer, to produce a new type of ‘microscope eye’ that is optimized to pick up certain characteristics of a biological sample that are important for a diagnosis.”

A standard microscope operates by shining a uniform amount of light on a sample from all directions. For their new microscope, Horstmeyer and his collaborators instead created a bowl-shaped light source embedded with LEDs, allowing the samples to be illuminated from different angles and with different colors. The new angled lighting pattern can then cast shadows and highlight different areas of the sample, depending on which set of LEDs is turned on.

The team connected this LED panel to their microscope, which was programmed with a machine learning algorithm called a convolutional neural network. Using blood samples that carried the malaria parasite, the algorithm enabled the microscope to “learn” which features indicated malaria infection, and which light patterns could best highlight those features. 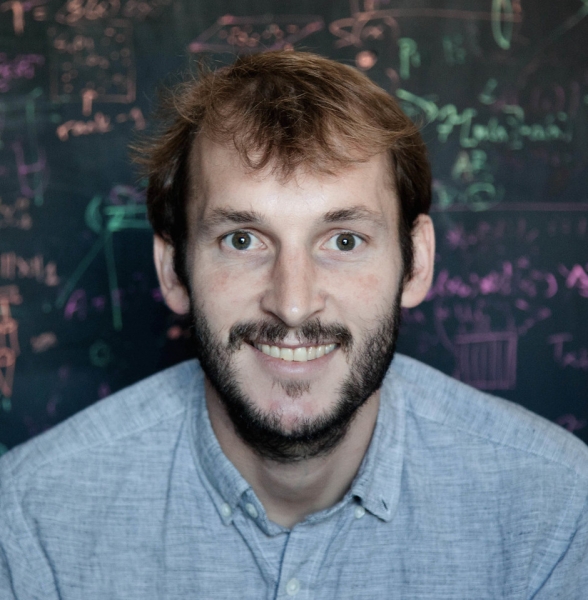 “Today it typically takes a clinician upwards of ten to 15 minutes to find the malaria parasite in a blood sample. It’s so small that you need a really powerful lens, and that only allows you to see about a dozen blood cells at any given time,” says Horstmeyer. “But our tool can zoom out and scan thousands of cells at once, and the microscope can make up for the drop in resolution by optimizing the illumination to identify and highlight hard-to-see features.”

Although imaging a larger area results in lower resolution and thus typically leads to very low detection accuracies, this new “intelligent” microscope can still correctly identify the malaria parasite in the sample about 95 percent of the time. The process also takes just a few seconds.

Horstmeyer and his team are optimistic that the tool can be modified to rapidly diagnose other blood-borne diseases, like tuberculosis or even intestinal parasites. They could also use the tool to determine if certain tissue lesions show a risk of progressing to cancer.

After the onset of the global coronavirus pandemic in March of 2020, the team also began to explore if their technology could be used to identify signs of the SARS-CoV-2 virus in blood samples taken from patients.

“A year ago nobody really knew how the virus worked or about its interactions with the body, but it was vaguely understood that it affects the blood because we were seeing issues with blood clotting,” says Horstmeyer. “We figured it must be changing the morphology of the blood cells, which is something that other viruses do, and we were curious if we could use the microscope to identify these specific changes in the shape and color of blood cells and use that to detect and diagnose patients with the SARS-CoV-2.”

Although the virus is too small to be seen in the microscope, the team worked with hematologists and pathologists at Duke Health to develop algorithms that could help the microscope identify specific changes in blood cells that could indicate a coronavirus infection.

“Our original goal was to create a COVID diagnostic, but since the project began a year ago, we’ve also explored whether we can use the blood samples to both identify the infection and predict patient outcomes,” says Horstmeyer. “Living through a pandemic has provided the team with really unique circumstances in which to test this technology, so while it’s been challenging it’s also been really meaningful and exciting.” 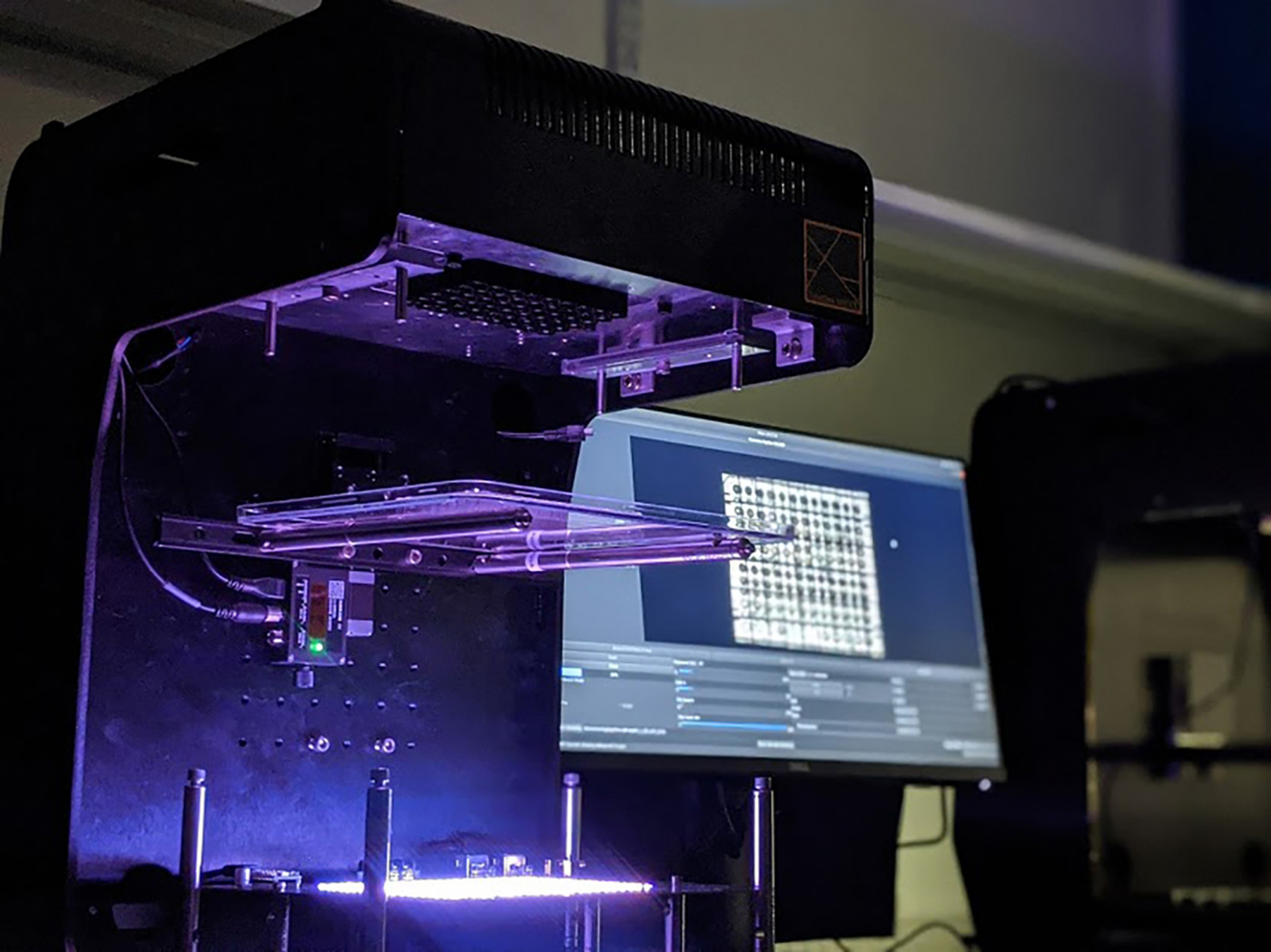 By linking together 96 smartphone camera sensors into a grid, each camera in the array can capture a detailed image of a small section of area

A Detailed Field of View

Today’s microscopes allow users to zoom in on their object of study, enabling them to see details like the scales on a butterfly wing, the neuronal activity of a zebrafish or the pulsing cells in a tissue sample. Although these views are detailed, they’re also incredibly limited—requiring users to move their sample by a few millimeters every few moments as they piece together a full field of view.

It’s incredibly challenging to make large camera lenses that can image a really large area at high resolution, so microscopes can rarely capture high-resolution detail over a multi-centimeter viewing area. But the Horstmeyer lab has developed a solution to this problem with a new multi-lens microscope design, called the micro-camera array microscope, or MCAM.

By linking together 96 smartphone camera sensors into a grid, each camera in the array can capture a detailed image of a small section of area, which the researchers can then stich together into a larger, complete image that can contain up to one billion pixels (a gigapixel) per snapshot.

“After we stitch the images together we can see a really large area, which for us would be the size of a full piece of paper, at high resolution – almost at the resolution to see single cells, which normal microscopes can’t do,” says Horstmeyer.

Currently, Horstmeyer is collaborating with researchers in the neuroscience community, such as Eva Naumann in Duke’s Neurobiology Department, to use the microscope to observe animal models, like zebrafish, as they freely move around and interact across a large area.

“We can outfit the microscope with fluorescent filters, which match up with fluorescent tags in the animal models, and that allows us to measure their neural activity as they freely move around and interact within their environment,” he says. “It’s a great tool because it allows us to see and record many things happening simultaneously, so we aren’t limited to looking at one small area or working with just one organism at a time.”

Horstmeyer and his collaborators have been able to translate this technology into their own startup, Ramona Optics, where they’ll continue to develop and manufacture the MCAM.

Click to zoom in on these gigapixel images from Ramona Optics:

One of the lab’s newest projects involves using light to measure biological events deep inside tissue. One of the simplest and oldest tools currently available involves placing a small light source, like an LED, on the tissue surface, and then measuring the brightness of scattered light at a variety of other locations. This technique is particularly popular for measuring blood flow within the head. As light shines from the LED, blood will absorb the scattered light and affect the amount that ultimately hits each detector, resulting in measurable dips in brightness.

“If you place multiple LEDs and sensors in different locations across the head, you can back out a really low-resolution image of blood flow, similar to a low-quality MRI. Then you can see how blood flow to certain areas of the brain changes when the subject completes different tasks,” says Horstmeyer. “We are changing this approach by using laser light, and instead of measuring how much light is absorbed, we’re measuring how fast blood is moving at different locations, by detecting the rapid variation of the laser light over time.”

To achieve this, the team has modified a technique known as diffuse correlation spectroscopy, where they’re now using thousands of highly sensitive “single-photon avalanche diode” sensors placed into an array, to quickly detect even the slightest changes in light.

“For our first tests we’re just trying to see what the smallest changes are that we can detect, and how quickly can we see them,” says Horstmeyer. “Our first results are really promising, and we’re now beginning to measure how blood flow changes during certain behavioral activities and similar applications. It’s an exciting prospect for us.

“Light has always been useful at helping us understanding biology and optics,” says Horstmeyer. “I’m having a lot of fun working at the intersection of the two.”