At first glance, the research images from Junjie Yao’s lab at Duke University appear more like abstract art than scientific graphics. Showcasing a kaleidoscope of colors with complex tangles of lines and curves, you’d never guess that these psychedelic-looking images can be used to track things like oxygen consumption in the brain, blood flow across different organ systems or even the temperature of deep tissues.

But that’s exactly what Yao does in his role as an assistant professor of biomedical engineering at Duke.

Yao specializes in photoacoustic imaging, a technique that combines the properties of light and sound to peer deeper into tissue and create high-resolution images.

Yao first learned about the technique as an undergraduate student working in an optics lab at Tsinghua University, and he was inspired enough to focus on photoacoustic imaging as a PhD student. Now, more than a decade later, he’s still fascinated by the technology.

“The more I work with photoacoustic imaging the more I love it,” says Yao. “On one end of the spectrum, my lab is able to use it to pursue very basic research and answer basic biological questions. On the other end, we’re able to use it for clinical translation work that can directly help patients. We can be as creative as we want, and that’s very exciting.”

When light strikes a biological molecule, some of its energy is transformed into heat, which induces a pressure wave that propagates through tissue as ultrasound. Photoacoustic imaging uses those ultrasound waves to gather information about the tissue.

The first step of photoacoustic imaging involves using a laser to send light into tissue. Photons from this light are absorbed by molecules in the tissue, like red blood cells, melanin and even water.

"It's basically compressing one second's worth of summer-noon sunlight over a fingernail area in a single nanosecond," says Yao. “When the laser hits a cell, the energy causes it to heat up a tiny bit and expand instantaneously, creating an ultrasonic wave. It's analogous to striking a bell to cause it to ring." 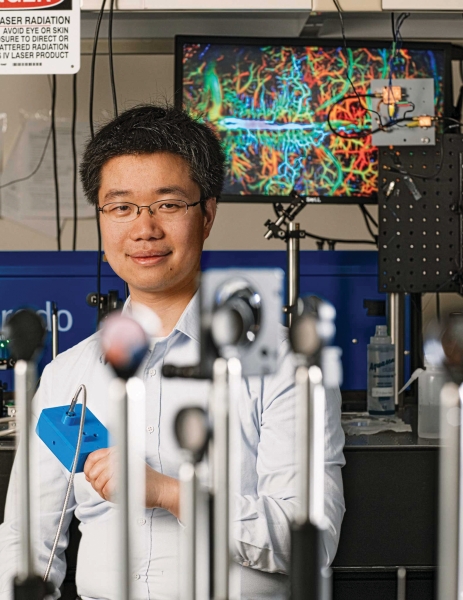 Researchers use algorithms, image processing tools and deep learning software to translate these ultrasound signals into high-resolution, highly colorful images. And the colors aren’t just for show––instead they are used to highlight certain characteristics of the tissue, such as absorption properties.

“If you were to look at an ultrasound image, you can see the outline of the tissue but the contrast is in different shades of grays, and it can be difficult to decipher small details,” says Yao. “Photoacoustic imaging provides a much clearer contrast, because different molecules in the body absorb and react to different wavelengths of light. They have specific chemical structures which act like natural contrast agents.”

For example, hemoglobin that is carrying oxygen will absorb light at one wavelength while deoxygenated hemoglobin does a better job of absorbing light at a different wavelength. These differences cause the tissue to emit ultrasonic waves at specific frequencies, resulting in varied colors in the final photo.

“The colors in our images can tell us a lot about the tissue characteristics, like the amount of oxygen in a tissue or the amount of blood flow to an area,” says Yao. “Photoacoustic imaging can also show small details like the DNA and RNA inside of cells, which appear darker than the surrounding cell.”

Yao and his team have already used photoacoustic imaging to study topics like the temperature of deep tissues for thermal-based cancer therapies. They have also formed partnerships with physicians at Duke University Medical Center to image and study blood vessels affected by different skin diseases.

Now, Yao and his lab are pursuing the use of photoacoustic imaging to track oxygen levels throughout the brain. In their first project, they’re investigating how the brain uses oxygen as it heals after a stroke.

“In general, there is a lack of information about how the blood vessels throughout the brain respond to different levels of oxygenation,” says Yao. “We want to see how small and large blood vessels are affected and how age may play a role. We’re hoping we can use this technique to illuminate how vessels repair themselves and begin to restore functions.”

Their second project explores how the drug epinephrine affects brain function when given to a patient after a cardiac arrest. Epinephrine essentially jumpstarts the heart after a heart attack, and it increases blood pressure by constricting blood vessels throughout the body. Already, the team has used photoacoustic imaging to see that the use of epinephrine in animal models reduces oxygen levels in certain sections of the brain. Now, the team is exploring how they can resolve this issue to optimize use of the drug.

Beyond these projects, Yao says his team is always looking for ways to push photoacoustic imaging forward, with the goal of making the technology faster, smaller and more colorful.

“We want photoacoustic imaging to be faster so we can capture the dynamics and study a wider range of biological processes, and we want the system to be smaller so we can more easily move it around inside and outside of the lab, like at a patient’s bedside,” says Yao. “And we’re always looking to make it more colorful so we can continue to learn even more about the tissue systems we’re studying. There are always new ways to advance and use this technology, and the possibilities are extremely exciting.”