At the beginning of March, Dr. Konstantinos Economopoulos realized life was about to change.

The novel coronavirus, originally identified in December 2019, had infected hundreds of thousands of people across the world, and the World Health Organization declared the growing pandemic a global health emergency. Classes at Duke were moved online, and surgical residents in their research years at Duke University Medical Center, like Economopoulos, were instructed to return as clinical residents to pitch in with surgeries for the growing wave of patients.

The coronavirus pandemic not only brought changes to daily life, but a slew of unique problems for physicians and other health care workers to deal with.

“Across the country, we were seeing reports about shortages of personal protective equipment, like masks, face-shields, gowns, and we had to change our behaviors to reduce certain risk factors,” says Economopoulos. “We had to limit the amount of time we spent in patients’ rooms. We also had to delay procedures and delay regular patient check-ins to ensure that both health care workers and their patients stayed safe.”

As a physician, Economopoulos saw the challenges firsthand. But as a Design Health Fellow and master’s student in Duke Biomedical Engineering, he could also work with colleagues on the newly assembled Engineering Response Team to begin developing solutions to pressing clinical needs emerging during the pandemic. 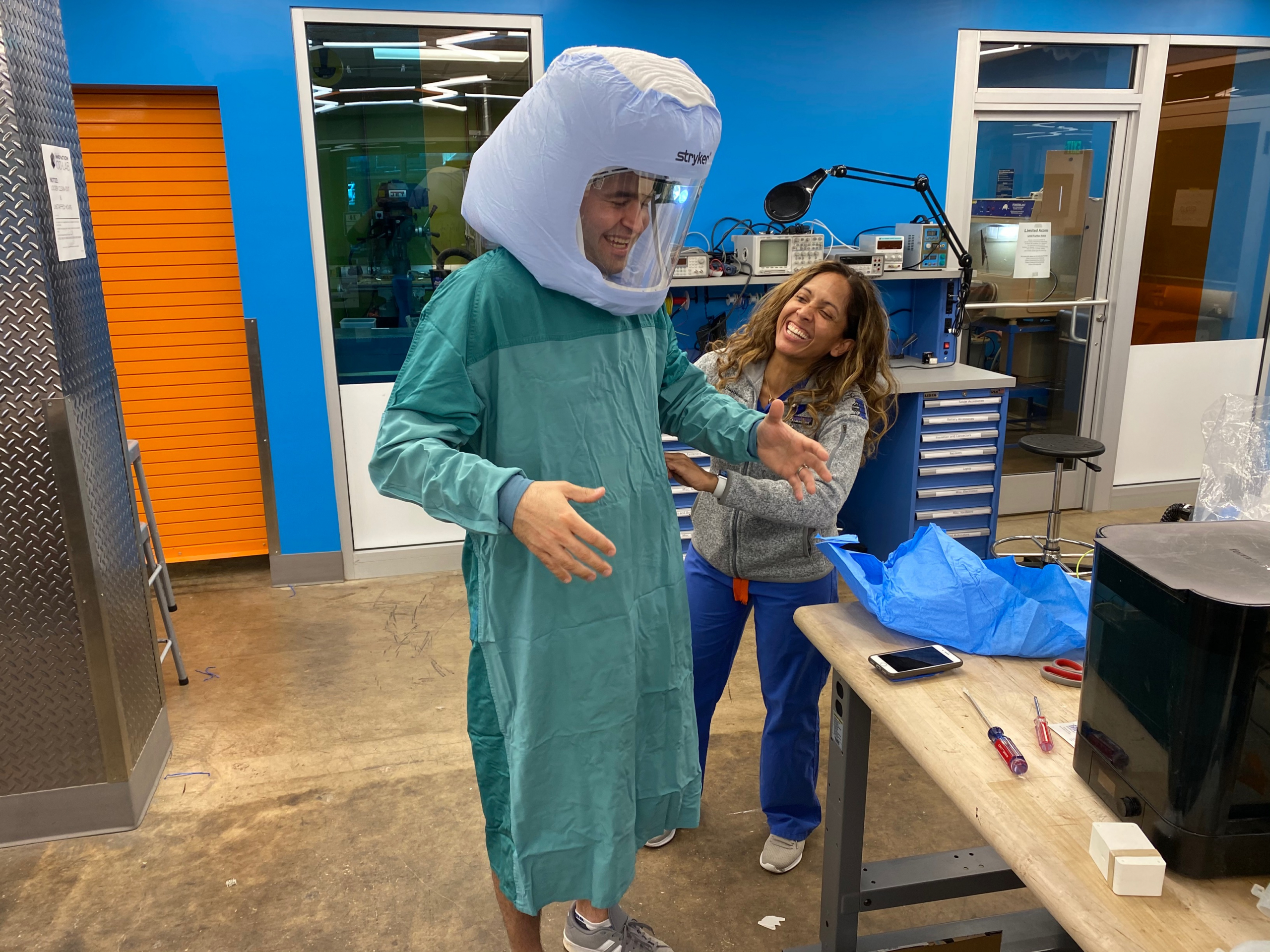 When the Duke Design Health Fellows program officially launched in August of 2019, its goal was to teach students how to identify pressing needs in health care and develop practical, creative solutions. With participants from engineering, medicine and business, interdisciplinary student teams would immerse themselves in a clinical environment and work with physicians, nurses and other stakeholders to identify areas where help was needed.

That collaborative design program turned out to provide an ideal model for how to quickly provide much-needed tools during a global pandemic.

“I had gotten calls from a Fortune 50 corporation about figuring out how to produce low-cost ventilators, and Ken Gall, the associate dean for entrepreneurship at Duke Engineering, had been approached with the idea of turning a surgical gown into a powered air purifying respirator,” says Eric Richardson, an associate professor of the practice of biomedical engineering and director of the Design Health program. “I was on the phone with Ravi Bellamkonda, the dean of Duke Engineering, and Ken the weekend after everything started closing [for social distancing], and we realized we needed to formalize all of these projects into a cohesive effort.”

Richardson, Gall, Paul Fearis, a senior lecturing fellow in biomedical engineering and one of the leaders of the Design Health Program and Donna Crenshaw, the executive Director of Duke MEDx, quickly formed the COVID-19 Engineering Response Team. Their first goal was to work together to prioritize the identified needs and discuss which projects were the most practical and impactful to immediately pursue.

“While the world was running around with its head in its hands dealing with tons of requests for PPE, ventilators and the like, we made the decision to take a breath, slow down and talk to the hospital,” says Fearis. “We’re in a unique position where all we have to do is walk across the road and ask, ‘Is this real? What will really help? And how good does it have to be?’ And we got engagement from the hospital back in spades, which is what really gave us traction rather than having us spinning our wheels.”

The team also pulled in Fellows from the Design Health program to assist and lead various projects, including Economopoulos. 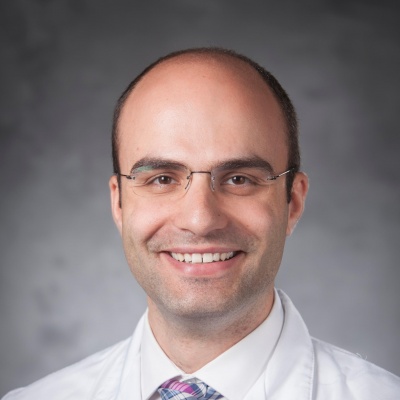 “Just like in Design Health, our first step was validating the need and making sure we understood what that actual problem was.The fact that we had people coming together from medicine and engineering was instrumental, and I was able to use my dual role as a Design Fellow and general surgery resident to give feedback about the clinical significance and feasibility of certain projects.”

A Checklist of Pandemic Proportions

Less than three weeks after the formation of the Engineering Response Team, multiple projects were already launched, including 3D-printed face shield that was prototyped with support from Chip Bobbert, the senior engineer and fabrication architect at Duke’s Innovation Co-Lab.

The mask team coordinated their design with Duke health care workers who would be most impacted by its use, including more than two dozen Duke nurses, graduate nursing students and other medical professionals. Ryan Shaw, an associate professor and the Elizabeth C. Clipp Term Chair of Nursing, and his team tested the prototypes in a simulation lab, where they determined which designs met safety standards and could be appropriately cleaned for re-use.

The mask includes a reusable respirator hood that can completely cover health care workers’ faces and a battery-powered blower that pulls air through filters that keep the suit ventilated and the visor clear. The PAPR hood is one of the safest pieces of equipment that health care workers can wear, and it’s the preferred PPE for workers who are performing procedures like intubating patients––an increasingly common action during the coronavirus pandemic.

The team coordinated the hood's design with Dr. Melissa Erickson, a Duke Oprthopedic spine surgeon who had approached the team with the idea. To date, more than 97 groups have accessed the license and 35 groups from around the globe have downloaded free design and instructions.

In addition to their projects involving PPE, the team has also advanced projects intended to improve patient care. Among them is a plan to adapt ventilators to make them both safer and more efficient when split between patients.

A traditional ventilator pushes air into a patient’s lungs at specific pressures, volumes, respiration rates and oxygen levels, and it can automatically sense when to adjust its air volumes. But when a ventilator is split, it compromises its safety alarms because it is no longer responding to a single patient.

The project, helmed by Amanda Randles, the Alfred Winborne and Victoria Stover Mordecai Assistant Professor of Biomedical Sciences at Duke and Dr. Muath Bishawi, a cardiac surgery resident, PhD student in Duke BME and an advisor for the Design Health program, involved 3D-printing resistor pieces that can restrict airflow.

The team based their work on Randles’ parallel computing algorithm that’s capable of simulating blood flow on a cellular level. They adapted the system to instead simulate air flow through a ventilator and patient lungs with different levels of resistance. This information helped the team design multiple benchtop models for resistor pieces that could resist and redirect airflow in specific ways, based on the needs of the patient.

CREATING DISTANCE TO SAVE LIVES

When Economopoulos joined the Engineering Response Team, he opted to lead a team that would address one of the issues he’d personally dealt with as a physician: protecting doctors and patients during routine check-ins.

The team came up with the idea to develop a clear tent that could go over a hospital bed. A negative pressure HVAC system attached to the tent would help contain the virus by filtering contaminated air exiting the tent. By making the tent portable, they could also more easily move patients around the hospital without risking contamination. “As health care workers, we were trying to minimize our time in patients’ rooms so we wouldn’t be risking our health more, especially if we were dealing with a shortage of PPE,” says Economopoulos. “A lot of the conversation had involved adapting and improving existing PPE to protect us, but we started brainstorming and thinking outside the box, and that’s when we started discussing the possibility of potentially isolating the patient within their room. That led us to come up with COVIAGE.”

“We worked with Ryan Shaw and Jackie Vaughn in the School of Nursing to gather feedback and continue to adapt the design. Even janitors and other staff in the hospital became instrumental to our team for the feedback they could provide about risks and the ways the pandemic affected their job,” says Economopoulos. “Within a few weeks we were able to deliver a finished product to the hospital. Normally these devices would take at least two years to plan, prototype and deploy, but the pandemic has fast-tracked everything.”

For Economopoulos, it was inspiring to see so many engineers and physicians and Design Health colleagues come together to craft local solutions to a global problem. He credits the collaborative nature of Duke and the infrastructure set up by the Design Health program as key ingredients for the Engineering Response Team’s success.

“The projects we’ve been working on have been beneficial to our community, to our country and they have the potential to be helpful internationally,” he says. “At times, the Engineering Response Team was essentially a scaled-up Design Health program with unprecedented collaborations across Duke. The pandemic has given people a huge incentive to go the extra mile, and it’s been really inspiring to be a part of.” 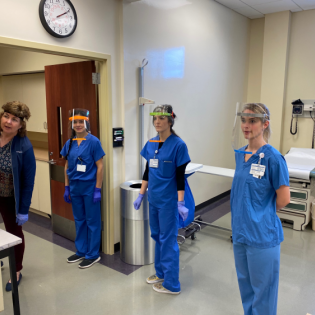 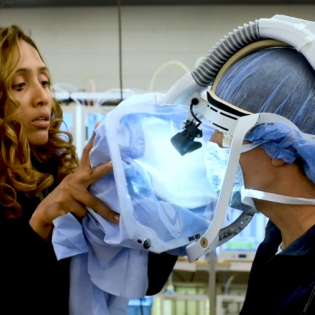 The team is working on projects to address Duke Health’s identified clinical equipment needs. As the team finalizes and implements devices, it will make the designs available for other hospitals and health care workers to download and use. 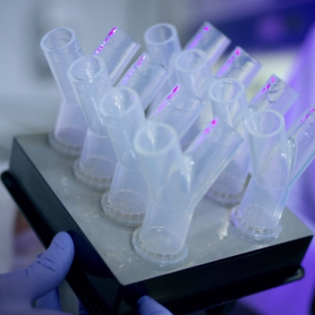