In December of 2019, researchers identified a cluster of people sick with a never-before-seen coronavirus in Wuhan, China. By March, what was once a small outbreak had flamed into a global pandemic, prompting the World Health Organization to make emergency declarations, and for cities and countries across the world to issue stay-at-home orders to help limit the virus’s spread.

For many students at Duke University, the unprecedented circumstances meant completing course work, classes and research projects from home and communicating with colleagues, faculty and fellow students through a plethora of virtual platforms.

But for Cassio Fontes, a PhD student in the department of biomedical engineering, the emergency instead prompted a question from his advisor, Ashutosh Chilkoti: Could Fontes use the lab’s signature diagnostic platform to detect the novel coronavirus?

Fontes had spent the last six years in the Chilkoti lab working with the D4 assay, a portable diagnostic tool that can detect the markers of diseases as accurately as the most sensitive tests on the market, but at a much faster rate––shortening a wait time of hours or even days to just 30 minutes. 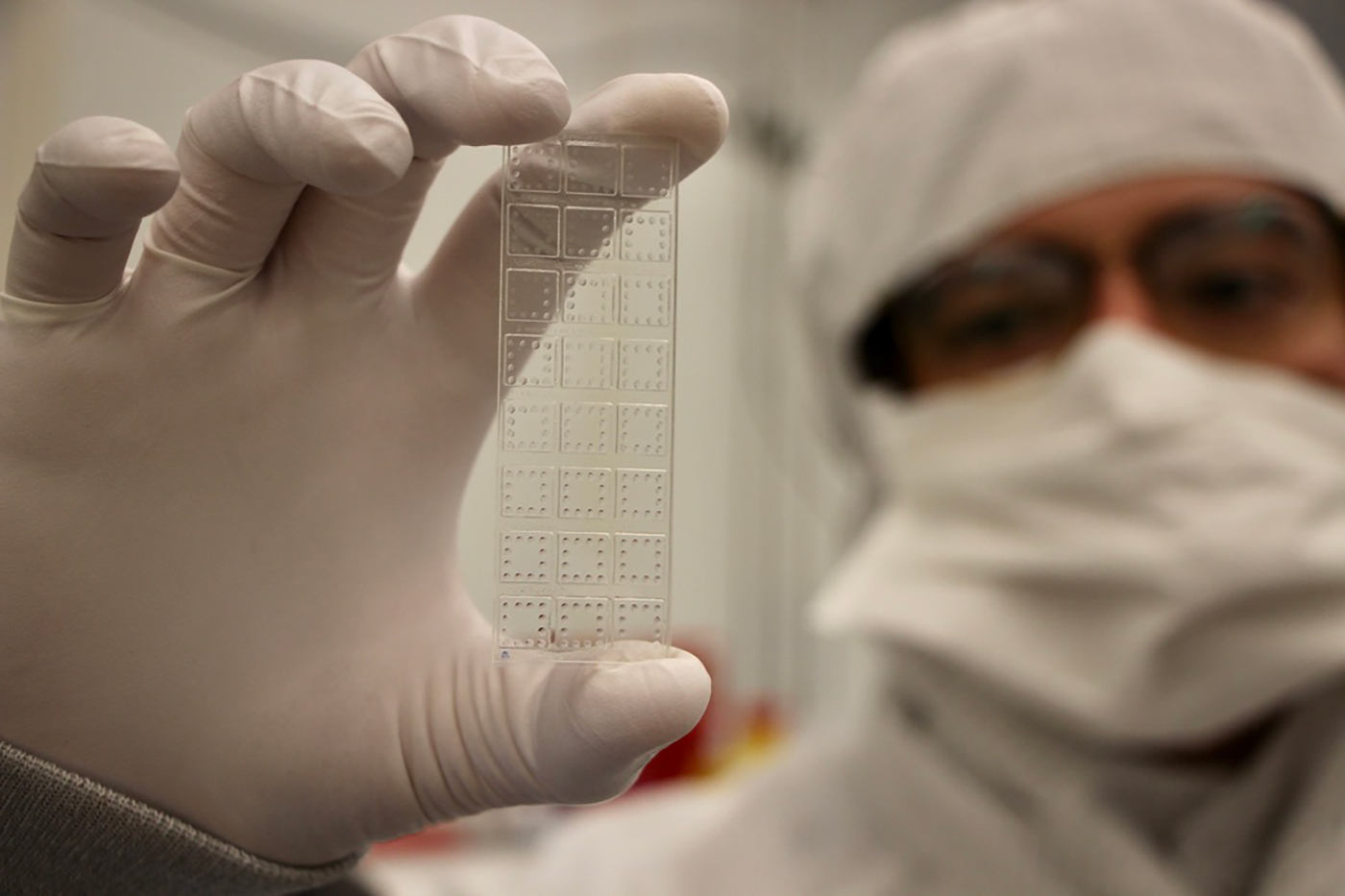 The test operates by detecting low levels of antigens, the protein markers of disease, from a single drop of blood or a throat or nose swab sample. Two types of antibodies are printed on the tool’s surface––capture antibodies and detection antibodies, which are tagged with a fluorescent marker. When a sample is placed on the slide, the detection antibodies separate from the array and bind to the target proteins. These antibody-protein pairs then attach to the capture antibodies on the slide, which can be examined via a handheld scanner.

Unlike other antigen diagnostic tests, the D4 assay is printed on a polymer brush coating, which prevents the non-target proteins from attaching to the slide’s surface. This gets rid of the ‘background noise’ on the chip, making it easier to detect lower levels of the target proteins.

“The tests that we’ve developed with the D4 are about 200- to 500-fold more sensitive than other diagnostic tests,” says Fontes. “Ebola had great antibodies to work with, and our test was so effective that we could beat the PCR test, which is the most sensitive test that exists.”

With that success in mind, Fontes and the Chilkoti lab went to work exploring if they could rapidly adapt their tool to potentially catch a brand-new virus. 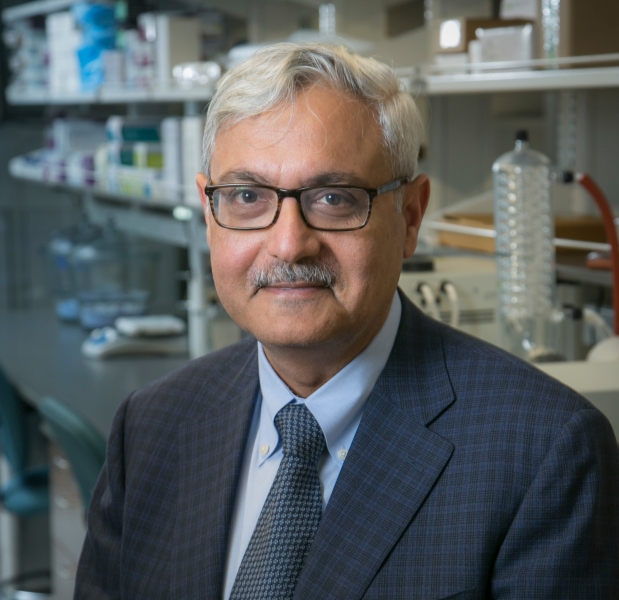 “The D4 assay took six years to develop, but when the WHO declared the outbreak a pandemic, we began working to compress all of that work into a few weeks so we could explore how the test could be used as a public health tool.”

Their first step involved identifying potential antibodies that could pair with a synthetic version of the proteins expressed by SARS-Cov-2, the virus that causes COVID-19.

“In the preliminary tests that we ran in early March, we showed that the existing antibodies developed for SARS, another coronavirus that was identified in 2003, could effectively detect and capture the synthetic versions of the COVID-19 viral proteins,” says Fontes. “The initial connection wasn’t as well-matched as the Ebola tests, but the D4 is so sensitive that it compensates for the less-than-ideal antibody match and we were able to make a proof-of-concept.”

By the end of April, the team had received a RAPID Response Research grant from the National Science Foundation to support their work with the test. With the $119,000 grant, the team was able to continue to optimize their platform. They also began developing a separate serological test on the platform, which uses pairs of antigens to detect and capture antibodies associated with COVID-19. According to the team, the serological test was useful because could indicate if a patient previously had a COVID-19 infection or was a carrier for the virus, while the original version of the test could detect a current infection.

“People have run into problems with some of the serological tests, where they haven’t been particularly accurate, but we’ve been able to use the D4 to try and give a quantitative measurement of those antibodies,” says David Kinnamon, a PhD student in the Chilkoti lab who also helped lead the D4-COVID project. “We’ve also been able to expand the user-friendliness of the platform, as the initial version required a modest amount of lab space and hands-on time. Our newversion has been adapted for a microfluidic platform that automates all steps between adding the sample and measurement.”

Although Chilkoti has said that it’s difficult to predict when a clinically available test might be available, a collaboration with Chris Woods, MD, a clinical investigator and professor of Global Health and Medicine and the Chief of the Infectious Diseases Division at the VA Medical Center, will allow them to continue to validate their platform using patient samples.

“Our goal is to test at least 30 samples from patients that tested positive for the coronavirus, and 30 samples from patients that tested negative,” says Jake Heggestad, another PhD student in the Chilkoti lab who is helping lead the project. “The antibodies that we’ve been using in the lab aren’t a perfect match for the antibodies found in patients, but they’re fairly similar. Ideally we’ll be able to correctly identify the positives and negatives and then publish our findings. We have started the clinical validation of the platform and so far, the results are exactly as expected. More tests are needed, but the initial results are very promising."

If initial tests work well, the team is interested in starting a study at Duke where they’ll be able to test larger populations, which will help them continue to refine and update their prototypes.

“This is a huge societal and public health challenge, and I believe that those of us who create these types of technologies have a responsibility to act,” says Chilkoti. “Our test is designed to be both adaptable and truly point-of-care, and this is clearly a scenario when a portable, fast and cost-effective diagnostic would be most useful. I’m grateful that the support from the National Science Foundation allows an opportunity to explore how our platform could be adapted to address these challenges.” 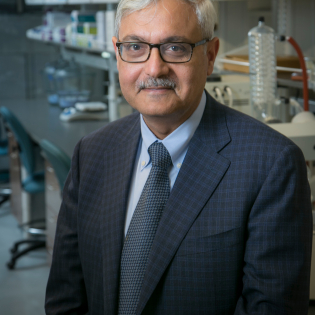 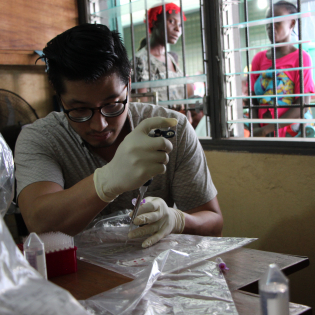 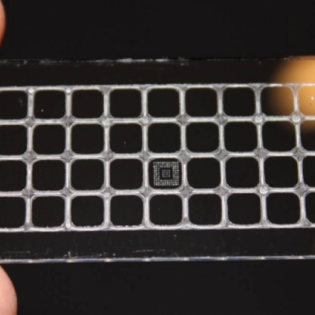