This technology could be a non-invasive way for physicians to detect abnormal cells, or dysplasia, which have the potential of turning cancerous

DURHAM, N.C. – After demonstrating that light accurately detected pre-cancerous cells in the lining of the esophagus, Duke University bioengineers turned their technology to the colon and have achieved similar results in a series of preliminary experiments.

This technology could be a non-invasive way for physicians to detect abnormal cells, or dysplasia, which have the potential of turning cancerous. These cells are in the epithelium, or lining, of various tissues, including the esophagus and colon.

Current biopsy techniques require physicians to take many random tissue samples, and for some disorders of the colon, these procedures can be disfiguring and life-changing. Instead of taking tissue samples, the new system would aim short bursts of light from the tip of an endoscope at locations suspected of having disease.

“When light is directed at these tissues, it scatters,” said Adam Wax, Theodroe Kennedy associate professor of biomedical engineering at Duke’s Pratt School of Engineering, who developed the device. The results of the Duke team’s preliminary experiments were reported online in the Journal of Biomedical Optics. “We can collect and analyze that scattered light looking for the tell-tale signs of dysplasia. Significantly, the technique is noninvasive so no tissue is taken and no dyes or contrast agents are needed.” 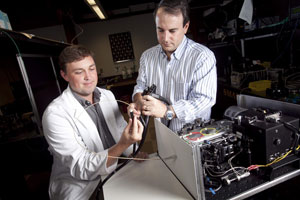 In particular, they are trying to spot characteristic changes within the cells of the epithelium. In the case of pre-cancerous cells, the nuclei are misshapen and larger than normal cells, and they scatter light in their own unique way.

“The important thing for clinicians is being able to detect these changes in the nuclei in cells just below the surface, which might not be detected by just looking at the lining of the colon through an endoscope alone,” Wax said.

The technology that Wax and his team developed for cancer detection is known as angle-resolved low coherence interferometry (a/LCI). In this process, light is shined into a cell and sensors capture and analyze the light as it is reflected back. The technique separates the unique patterns of the nucleus from the other parts of the cell and provides representations of its changes in shape .

“This approach could be the future of diagnosing dysplasia of the colon,” said Dr. Christopher Mantyh, colorectal surgeon at Duke University Medical Center and member of the research team. “The old-fashioned techniques we use haven’t changed in years. This could be a real game-changer in how we detect, characterize and even treat precancerous or cancerous lesions. For some gastrointestinal biopsies, the procedure itself has inherent risks such as bleeding or perforation, so a non-invasive technique could greatly improve a patient’s quality of life.”

In their experiments, the Duke team used the device on samples of colon removed from 27 patients suspected have having colon cancer. The researchers then compared the results obtained from their device to the actual findings made by pathologists, and found that the overall accuracy of the device was 85 percent. Interestingly, the accuracy of the same technology was 86 percent when used during a recent clinical trial involving patients suspected of having Barrett’s esophagus, a precursor to esophageal cancer.

Mantyh said he believes the new approach could be especially useful for people with inflammatory bowel disease, since they tend to have a higher incidence of dysplasia in the colon.

Since approximately 85 percent of all cancers begin within the layers of the epithelium in various parts of the body, Wax believes that the new system could also work in such cancers as those of the trachea, cervix or bladder.

The research was supported by the National Institutes of Health. The proprietary rights to the technology are owned by Oncoscope, Inc., a Durham-based company founded in 2006 by Wax based on the Duke technology. Wax has a financial interest in the company.

Other members of the team, all from Duke, are Neil Terry, Yizheng Zhu, Julie K.M. Thacker, John Migaly and Cynthia Guy.