Introducing Engineering Concepts in a Pandemic 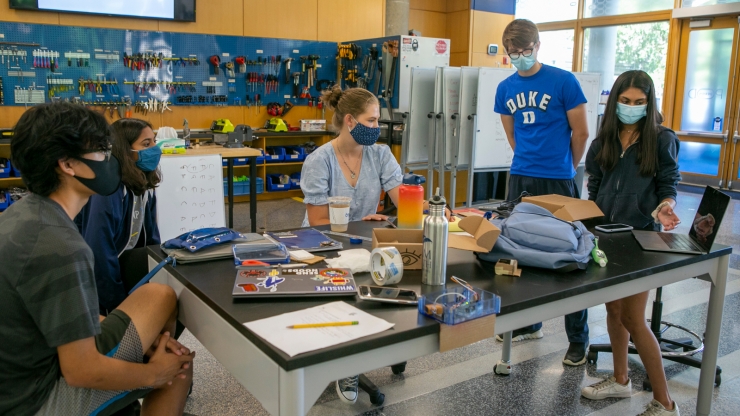 EGR 101 may look a little different in a pandemic, but first-year students are still learning a lot about fundamental engineering skills

As faculty and staff at Duke’s Pratt School of Engineering planned to shift most courses online for the Fall 2020 semester, there were more obvious paths for some curricula to make the change than others. Courses steeped in fundamental concepts, calculations, computer simulations and programming, among others, could more easily rely on virtual lectures and zoom meetings.

Even a handful of labs could turn remote, such as electrical engineering courses that prepared and shipped kits to students that included items like Arduino boards, breadboards, resistors, capacitors, transformers, a suite of sensors and even screwdrivers. Test and measurement equipment included handheld multimeters with temperature probes and software-based oscilloscopes and function generators.

“Duke Engineering has been uncommonly successful in teaching hands-on classwork online,” said Nan Jokerst, the J. A. Jones Distinguished Professor of Electrical and Computer Engineering. “Shipping out lab kits and having fantastic TAs who can focus on helping students master the tools have gone a long way toward empowering students to create and innovate, even if they’re learning remotely.”

Some experiences, however, cannot be replicated through conference calls and equipment kits. At its core, engineering is a collaborative discipline in which hands-on, in-person processes are irreplaceable to most career paths. So when Duke decided to bring first-year and second-year students back to campus this fall to make sure their college experiences were not derailed, the decision to make Duke Engineering’s signature EGR 101 First-Year Design course mostly in-person as well was a no-brainer.

It’s proving to be the right decision. 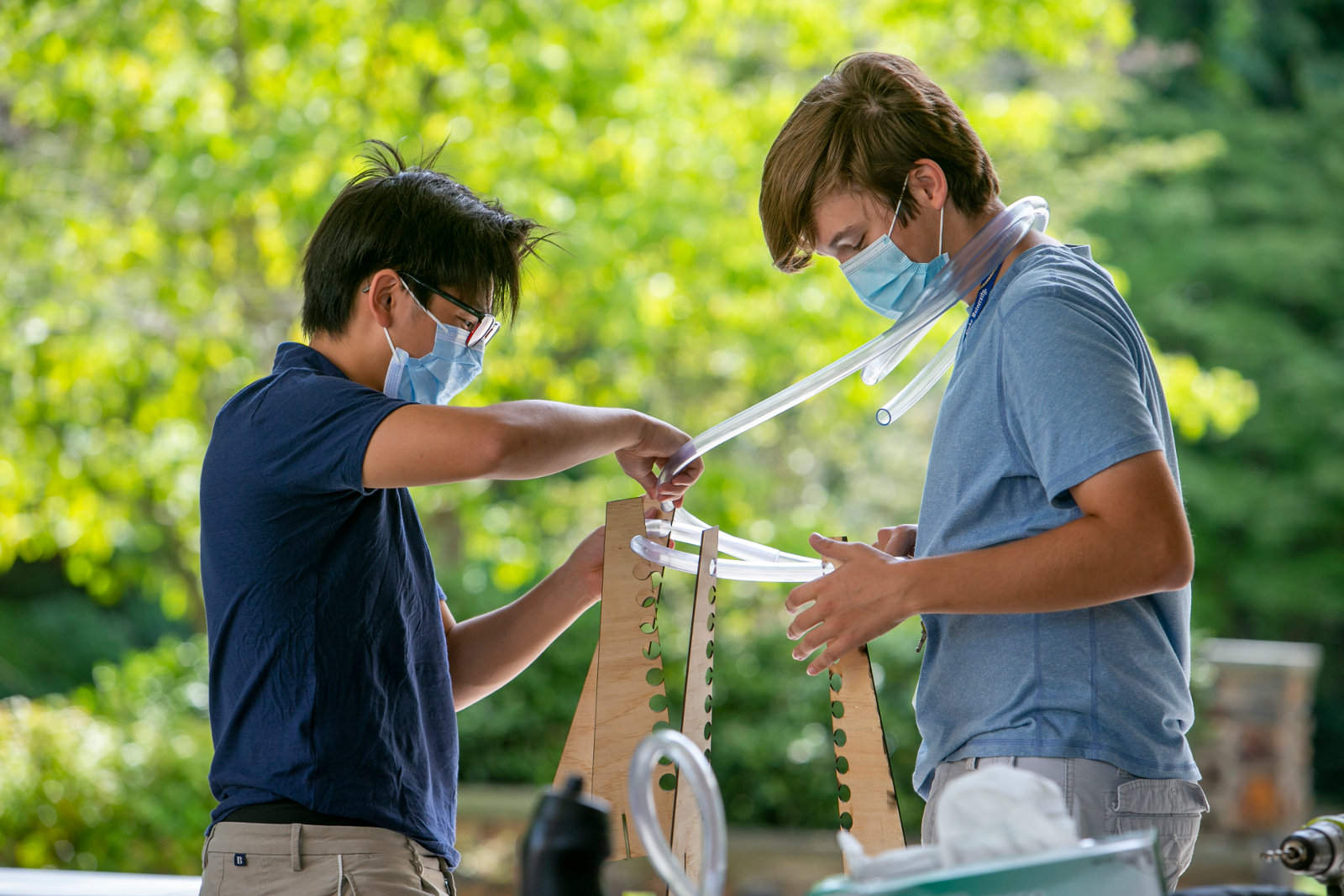 “I heard a bit about EGR 101 before starting, mostly that it was really fun and a hands-on way to get integrated into the engineering school,” said Nick Haddad, a first-year student. “The technical topics aren’t too deep, and it’s mostly teaching us how certain skills are essential to prototyping and working together as a team. It’s giving me a good sense of what engineering design is all about.”

“EGR 101 is the only class I have that is in person, so I’m definitely always looking forward to it,” echoed Alison Korn. “I’ve never had an engineering class before, so I’m thankful they decided to do it in person. I can’t imagine prototyping without having in-class experience working with wires and various pieces of equipment.”

In the foundational EGR 101L: First-Year Design class, students work in teams to design solutions for community clients. With a focus on tackling real-world problems, the course introduces first-year students to engineering and design thinking.

To keep this important class as in-person as possible, certain safety precautions and sacrifices had to be made. The number of class sections was nearly doubled to keep class sizes down, which required outfitting a second learning space outside of the traditional Design POD and recruiting more instructors. (Two sections are also taught online for students unable to be on campus this semester.)

During the classes themselves, each team of students—three groups outside and six-to-eight groups inside—is spaced out around a group of tables pushed together to help them remember to stay apart, which isn’t always easy. 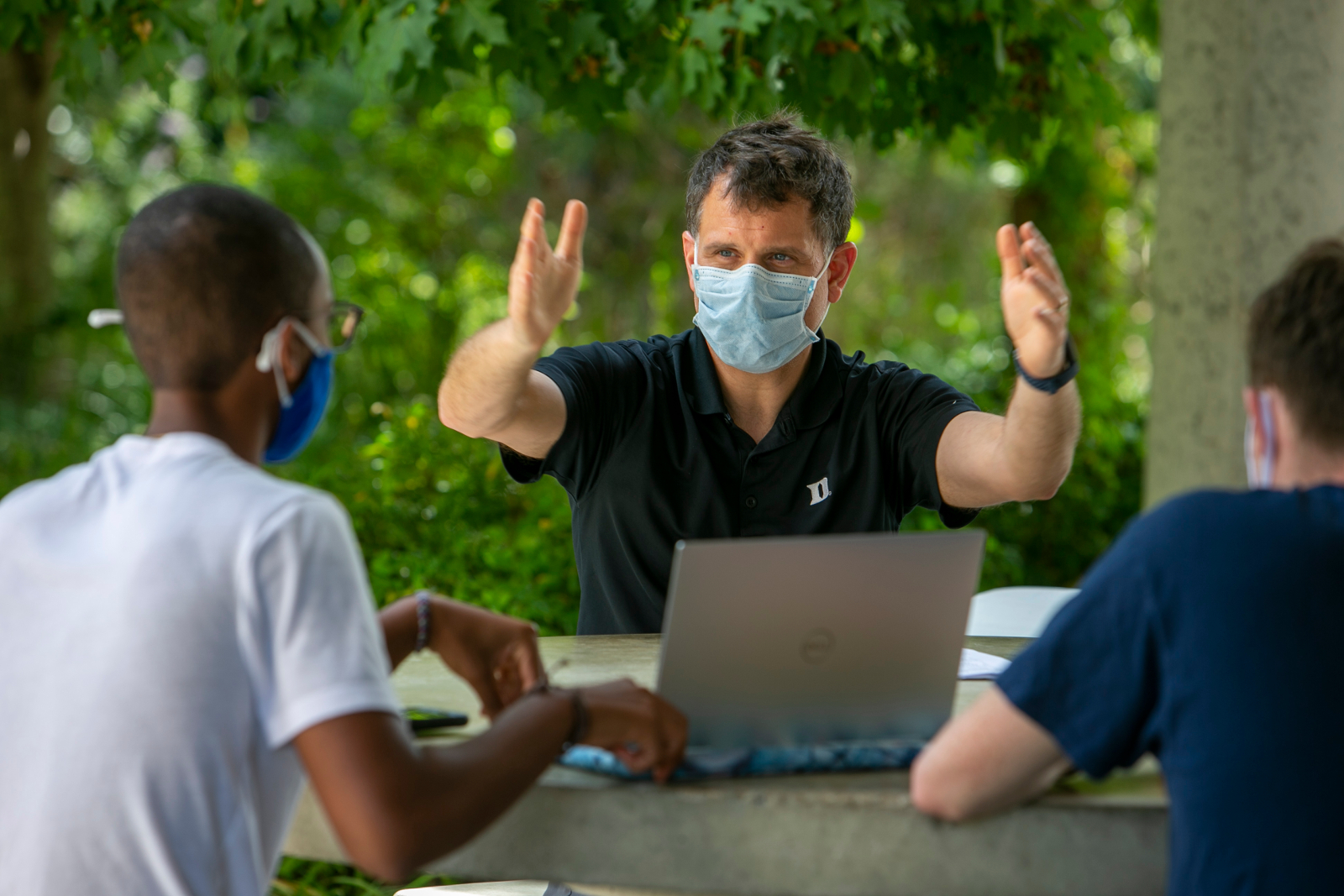 “Because the classroom is usually filled with the noise of other teams collaborating and testing their prototypes, it’s often hard to hear teammates on the other side of the table, especially since we can’t read lips while wearing masks,” said Korn. “It’s also hard to remember we can’t huddle together around a screen while we’re engrossed in a prototyping or brainstorming session.”

But they’re making it work. During the first four weeks of class, the student teams worked through a “design sprint” aimed at developing a handwashing timer. Students learned key steps of the engineering design process, and most teams completed a functional prototype.

After getting their feet wet in the engineering waters, the teams are now wading deeper by taking on engineering projects from real community clients. For example, Korn’s team is developing a device that can warn students when decibel levels in campus workshops approach potentially ear-damaging levels. And Haddad’s team is one of a handful working to develop a new bronchoscopy model for medical students to practice with that is more anatomically correct and provides realistic tactile feedback during procedures.

“Overall, I think they’ve done a great job making the class safe while still allowing us to learn together,” said Haddad.