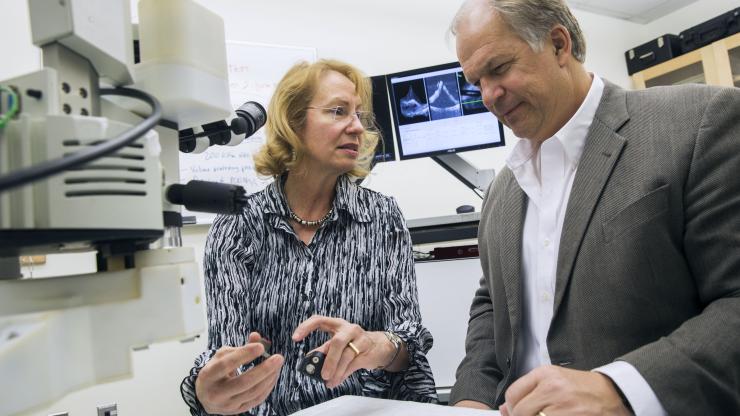 Joseph Izatt first began working with optical coherence tomography, or OCT, in 1991 as a postdoctoral researcher at the Massachusetts Institute of Technology. In the intervening years, he’s become one of the leading experts in OCT, and he has continued to advance the optical technology through both his lab at Duke University and his former company, Bioptigen, Inc.

Optical coherence tomography is an imaging technique that uses coherent light waves to penetrate beneath the surface of living tissues, allowing researchers to diagnose and subsequently treat diseases. Today, the technique produces both 2-D and 3-D images of tissue in much finer detail than other techniques like ultrasound, CT or MRI scans. OCT can provide in-depth, cross-sectional images with a resolution of 10 micrometers—smaller than a width of human hair—making it an ideal technique for detecting and monitoring the treatment of serious eye diseases like glaucoma and age-related macular degeneration (AMD).

“OCT allows you to advance from surface imaging to cross-sectional or volumetric imaging, and with much greater resolution,” says Izatt, the Michael J. Fitzpatrick Professor of Engineering at Duke. “That’s really important because many diseases that cause blindness are quite subtle to diagnose accurately with conventional instruments, and that requires many years of training. But OCT is a major advance in the speed and ease of diagnosing these problems, and just as importantly in monitoring their successful treatment.”

“My lab was able to contribute to a revolution in the technology underlying OCT, which made it many times more sensitive and much faster at acquiring images in patients,” says Izatt. “After I started at Duke I was approached by Eric Buckland, an optics PhD and veteran executive who was looking to start a high-tech company in North Carolina.”

After working with Duke to find incubator space, Izatt, Buckland and optical scientist William Brown founded Bioptigen in 2004. The team concentrated their efforts on developing technology that could show images to physicians in real-time, eventually creating their first successful product—a handheld OCT probe that allowed doctors to hold the tool over a patient’s eye and simultaneously see the image in a screen.

“Dr. Toth had been asking me for OCT in the operating room since 1994, and she ended up taking the handheld tool into surgery with her,” says Izatt. “That still wasn’t especially convenient because she’d need to stop the surgery, move the microscope out of the way and put the probe over the patient, but it was so useful to have that information while the patient was still on the table that she was willing to do it.”

After the success of Bioptigen, Izatt and his team are enthusiastic about the ongoing entrepreneurial framework in Duke BME, and they are looking ahead to see how they can continue to advance OCT.

“I was fortunate to work with talented surgeons at Duke, and at Bioptigen I was very lucky to work with talented managers and engineers,” says Izatt. “The whole experience was terrific, and to be able to go into an environment and see our technology being used to benefit patients is truly gratifying.” 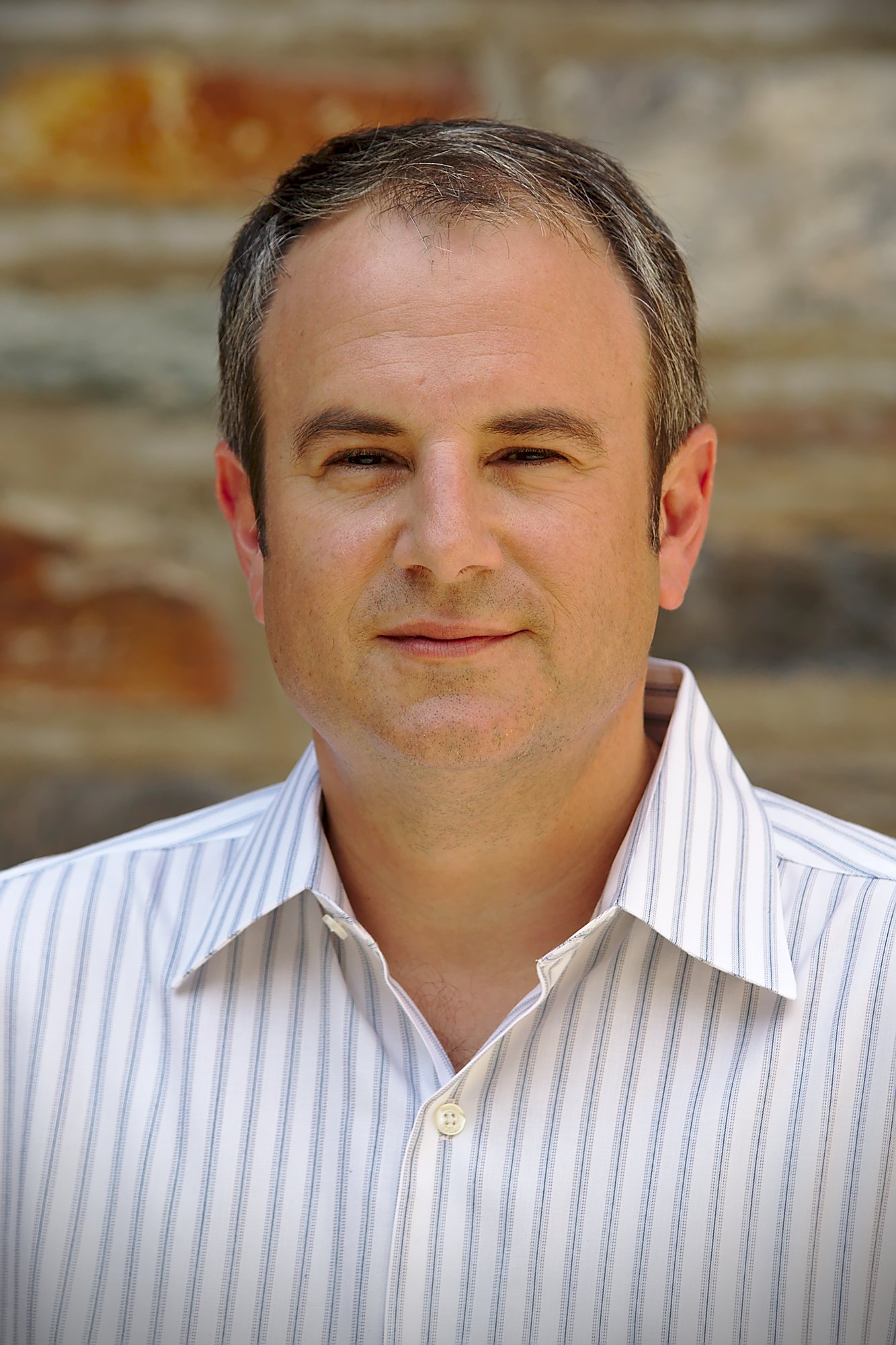 OCT is considered the gold standard for eye disease imaging and diagnosis, but its high cost—ranging between $35,000 to $150,000—often puts it out of reach for people without access to a large eye center or hospital. Adam Wax, a professor of biomedical engineering at Duke University, aimed to change that when he founded Lumedica in 2014.

“Our goal is to democratize access to this valuable imaging tool. Say you live in a rural community and you need to be screened for retinal disease as you get older—are you going to be able to drive to the Duke Eye Center and get an OCT every year like you’re supposed to?” asks Wax. “Maybe you go the first year, maybe the second year, but it’s not easy to constantly go back. If it was at the doctor’s office in town, though, then they have an easier time getting screened.”

With 20 years of experience in the field of biomedical optics, Wax started Lumedica
to commercialize low-cost biomedical imaging strategies developed in his lab at Duke.
The poster child for his work is Lumedica’s OQ LabScope, an OCT-equipped tool that is approximately the size of a shoebox and weighs less than 6 pounds. Rather than use metal parts in the spectroscope, Wax and his engineering team created a design with 3-D-printed parts, allowing the tool to be more flexible without affecting the spectrometer’s alignment.

In addition to bringing the device to smaller ophthalmologist offices, Wax and his team plan to explore how their tool can also be used in the context of global health. “The most impressive demonstration is that we put it in a box, put it on a plane, and when we took it out of the box it immediately works without any additional calibration,” says Wax. “It’s the perfect modality for resource-limited settings.”

While the device isn’t as precise as the high-end OCT tools used in eye centers, the OQ LabScope matches the performance of entry-level OCT systems. According to Wax, the tool is also three to five times less expensive than portable competitors, costing less than $10,000 while offering a more precise reading.

“People have talked the talk, but we’re the first ones to walk the walk,” says Wax. “We’re really the first ones to put an acceptable OCT device on the market and there aren’t any competitors that are close to the price point.”

In addition to helping patients with eye diseases, the lower price has piqued the interest of researchers who never thought to use OCT in their work because of the high cost. “While we can’t say we predicted every market the tool would go to, this price point makes it compatible for undergraduate and graduate laboratories,” Wax notes. 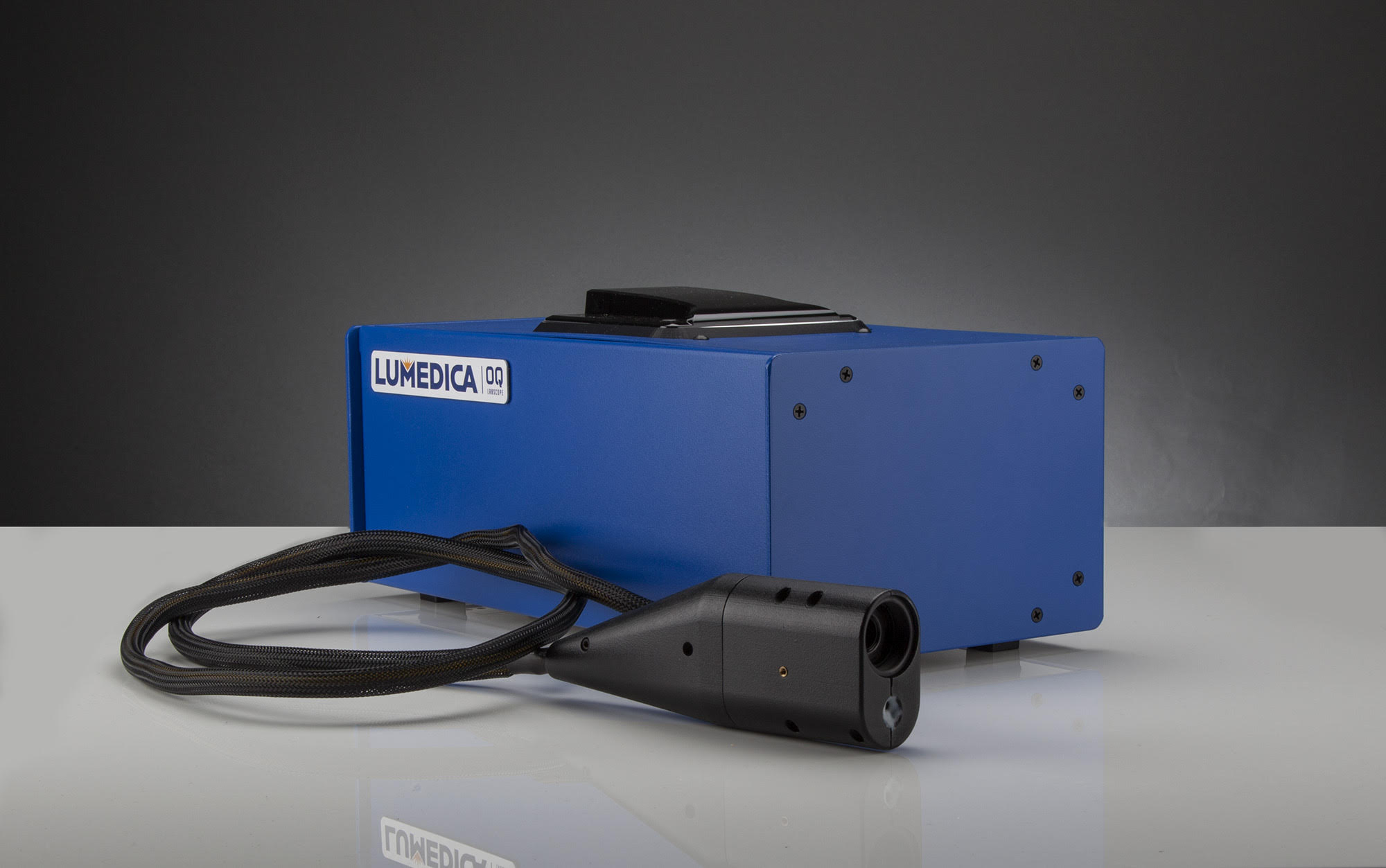 Now, Wax and his collaborator, Nick Ulrich, an assistant professor of ophthalmology at the University of North Carolina in Chapel Hill,are working with the Duke-Coulter Translational Research Partnership to develop a device similar to the LabScope that is optimized to work for retinal imaging. To commercialize this idea, the team plans to start a spin-off from Lumedica, called Lumedica Vision, focused on bringing low cost OCT imaging to the ophthalmology market.

“With lots of eye diseases, if you can find them you can halt their progression. The problem is that people often don’t go to the eye doctor until part of their vision is lost, and at that point they can’t reverse it,” says Wax. “With OCT, you have the capability of finding these problems early, so our goal is to put OCT where it wasn’t before.”