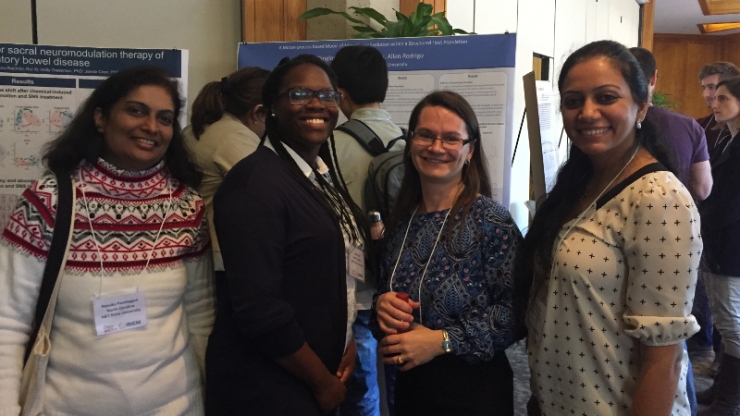 An emerging program designed to develop the growing field of bioinformatics held its first symposium at Duke March 10, attracting 100 participants from disparate fields from each corner of the Research Triangle.

Integrative Bioinformatics for Investigating and Engineering Microbiomes (IBIEM) was established in late 2015 to bring together scientists with an interest in microbiome research. A partnership between North Carolina A&T State University and Duke University, the program is supported by a $3 million National Science Foundation Research Trainee grant.

The curriculum is designed to teach graduate students how to conduct bioinformatics research by partnering across disciplines. Students with a background in the physical sciences learn about statistics and handling data, while those coming from a mathematical background are exposed to fieldwork and bench experiments.

“Human health is a large and important part of research related to microbiomes,” said Claudia Gunsch, director of IBIEM, with a nod to the symposium’s cosponsor MEDx, a program designed to enhance existing ties and foster new interdisciplinary collaborations between Duke’s School of Medicine and Pratt School of Engineering. “But there’s so much more to the field than human health. We’re trying to bring people together to draw attention to different research opportunities happening in bioinformatics and spark new collaborations.” Gunsch led off the symposium by talking about her work to engineer microbiomes to transform environmental contaminants into benign products. This involves getting bacteria with useful genes to transfer them to other species already thriving in the target habitat, and finding ways to stimulate their activity to increase their rates of bioremediation.

Three other speakers from Duke Engineering also joined the lineup. Zhixia Ye, a postdoctoral student in the laboratory of Michael Lynch, spoke about her research on genetically optimizing the growth and activities of microbes to produce commercial products. Lingchong You described his work to understand how antibiotics affect the growth rate of pathogens to better tailor dosing schedules. And Mark Borsuk described his analytical work using Bayesian networks to find and define relationships between variables in a system that might otherwise be hidden.

The two keynote speakers featured the University of North Carolina – Chapel Hill’s Jeff Dangl, who spoke about bacteria communities in plants and how they affect their immune systems, and North Carolina State University’s Jennifer Kuzma, who presented her work on the social and policy systems involved in these lines of emerging research.

“I think that sometimes we get so stuck in our respective niches that we forget how our work can be applied across disciplines,” said IBIEM trainee Savannah Volkoff, a second-year PhD student working in Gunsch’s laboratory on the bioremediation of common contaminants found in sediments and soils. “IBIEM has provided a space for students in different fields to collaborate and conduct better research. I know that interacting with a statistician twice a week has really helped me learn how to analyze my data.”

IBIEM is now recruiting its second class of IBIEM trainees for the 2017-18 academic year. For information, visit ibiem.pratt.duke.edu.