Deep brain stimulation (DBS) has improved the lives of thousands of people with Parkinson’s disease (PD) since its 2002 FDA approval. By delivering electrical currents to the basal ganglia, the region of the brain that controls movement, the so-called “brain pacemaker” can relieve tremor, rigidity and other motor symptoms that debilitate PD patients. DBS, which can also treat epilepsy, essential tremor and obsessive-compulsive disorder, is already used by 100,000 patients worldwide.

“The technology can have almost miraculous effects,” says Warren Grill, the Addy Professor of Bioengineering at Duke—but it’s not perfect, or even fully understood. For the past decade, Grill and his team have sought to learn more about how DBS works and how it can be improved. Now, their transformational technology is making DBS therapy for PD not only more effective, but safer and less expensive.

“Morse code for the brain”

The novel technology, Temporally Optimized Patterned Stimulation (TOPS™), sprang from a new insight into how to combat one of the critical biological problems in PD: as the disease causes dopamine-producing cells to die and dopamine levels in the brain drop, neurons stop signaling in normal ways and instead begin firing in lockstep with each other. Those abnormally synchronous signals send faulty messages to the rest of the body, disrupting motor activity. 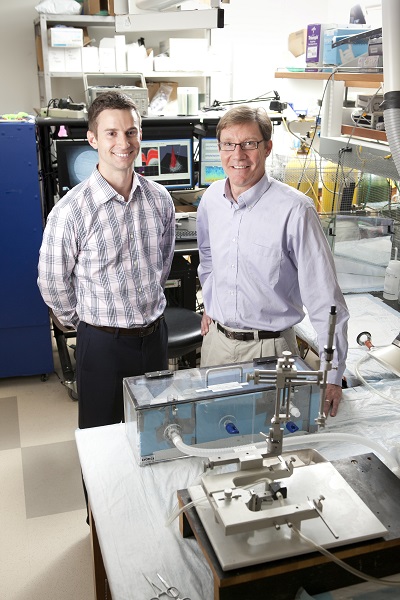 Existing DBS batteries stimulate the basal ganglia at the rate of 130 to 200 regular pulses per second. Figuring out exactly what rate to use is tricky, though—while it has to be high enough to control symptoms, if it’s too high patients can suffer side effects including unwanted movements, disrupted speech or cognitive problems, says Grill. Furthermore, those rapid pulses quickly wear down the battery. Most patients need a replacement every three to five years, requiring expensive surgery.

Over the years Grill and his team tried a number of approaches to improve the technology. The team started by testing randomized electrical pulses, but discovered that the more random the stimulation, the worse it worked. “That was the stage of inspiration,” says Grill. “The findings told us, for the first time, that the timing between the pulses matters—not just the rate.”

Pratt BME doctoral student David Brocker was tasked with using optimization in a computer model of the basal ganglia to find the best pattern.

“There are an infinite number of possible patterns so we applied a method called a genetic algorithm, which mimics biological evolution, and used time-based patterns of stimulation as the evolving trait,” explains Brocker. “We then combined the genetic algorithm with a computational model of DBS for PD patients to develop an optimal pattern to test in humans.”

(Brocker says that process, which took about 18 months, would have taken much longer without the use of the Duke Shared Cluster Resource, a group of central processing units that enabled his team to parallelize the entire simulation process. This allowed them to test many potential patterns in significantly less time than it would have taken on desktop computers.)

Ultimately the team created TOPS. Unlike conventional generators that emit a steady stream of pulses, TOPS pulse generators deliver intermittent patterns of stimulation at about 45 pulses per second—each lasting only one-tenth of one-one-thousandth of a second. Grill likens the resulting pattern to Morse code.

A clinical experiment to evaluate the technology—conducted in collaboration with Duke’s Dennis Turner, MD, and neurosurgeons at Emory University and Wake Forest Baptist Medical Center—yielded promising results, published in the January 2013 issue of Experimental Neurology.

The upshot: TOPS technology appears to make DBS more effective at relieving PD symptoms and to greatly extend the life of neurostimulator batteries—resulting in fewer battery-replacement procedures. This translates to fewer risks and complications for patients and lower medical expenses overall. Another plus: the pulse-generator battery—typically implanted above patients’ collarbones—is about half the size of traditional batteries.

From concept to commercial enterprise

As the therapeutic value of TOPS became clear, Grill and his team began working with Duke’s Office of Licensing and Ventures (OLV) to translate the innovation from the lab to a commercially available device for use in patients. 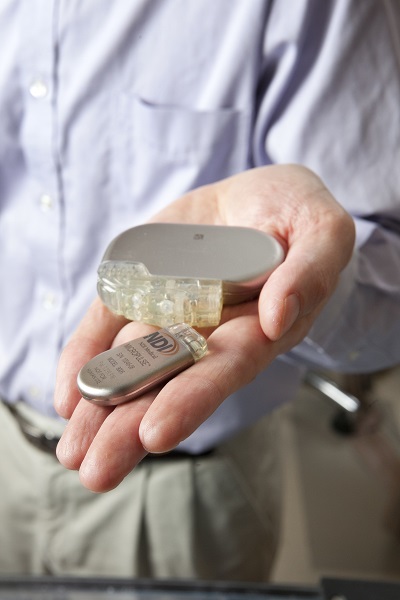 “The OLV staff was very supportive,” Grill says. “They helped us protect the underlying intellectual property and develop a licensing agreement.”

“Our work begins with the idea for an invention and carries through its development, patenting and licensing to a company,” says Duke professor and OLV managing director Barry Myers. “We monitor new companies to ensure that the inventions behind them are meeting the needs of patients, research sponsors, faculty members and the institution.”

The result was the development of the NDI Micropulse™, as well as the May 2013 launch of Deep Brain Innovations, LLC, a portfolio company of NDI Medical, LLC, a firm that funds and develops promising neurodevice technologies. Grill is NDI’s chief scientific officer.

NDI president Geoff Thrope says the most important thing about translating an idea into a successful commercial enterprise is to understand and be guided by the needs of the end users.

“Throughout the development process, as you talk with a wider range of people and marketplace influencers, there are always things to learn,” he says. “It’s critical to be open to new information and ideas, and then lock it in, move ahead and formulate the product.”

The next step, say Grill and Thrope, will be to request FDA-sponsored clinical trials for a TOPS-based device, which will take several years to complete. In the meantime, they’ll continue investigating the best way to get TOPS technology to patients safely, strategically and expeditiously.

"The beauty of this technology is that it will work not only for PD patients – the most prevalent existing population – but also for anyone with a neurological condition for which DBS has proven effective," Thrope says. "So the opportunity to impact the treatment of these conditions in a more efficient and elegant manner is extraordinary."