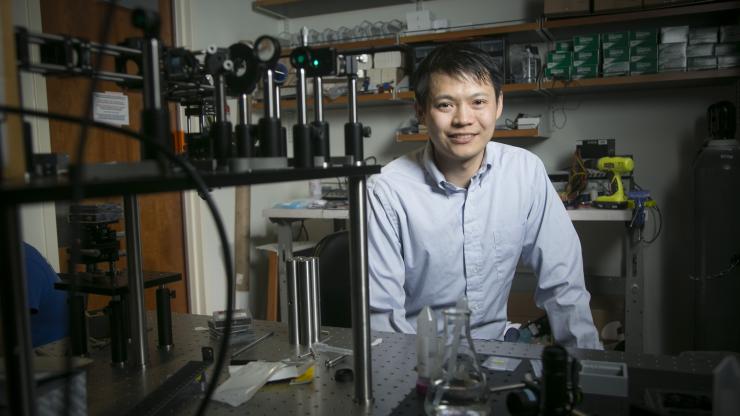 With the CAREER Award, Gong will use mesoscopic brain imaging to study groups of neurons at once rather than individual cells. Although comparatively low-resolution, mesoscopic imaging will allow the team to examine neuronal activity over a few milliseconds, taking a frame every two to five milliseconds rather than the 25-50 ms it takes with calcium imaging, the current imaging standard.  This method, Gong says, will enable his team to better understand how different regions in the brain connect to each other.

“Ideally we would want to know what every neuron is doing on millisecond timescales, but the technology isn’t feasible for that at the moment,” says Gong. “Instead, we can look at individual neurons at slow timescales, or look at what groups of neurons are doing together on fast timescales. The latter is this proposal, where we’ll access a window within the spatial-versus temporal-tradeoff that hasn’t been previously accessed with other technologies.”

To obtain these measurements, Gong and his team will use a set of protein sensors that respond quickly to neural activity, and optical microscopes capable of recording the activity. This rapid imaging technique should help researchers understand the neural connections in an animal model brain, similar to how a physician can use an MRI to examine the human brain, Gong says.

“Although the MRI works on slower timescales, it’s helpful because researchers can see if two brain regions are always active together, and subsequently conclude that they’re connected and work together,” he says. “In our proposal we’re going to examine the entire brain of a zebrafish so we can try to detail what blocks of the brain are connected and function together, but on much faster timescales.

“Being recognized with the CAREER Award is very helpful for initiating a new path in research,” he adds. “The proposed research to image neural activity at mesoscopic scales will provide information that bridges what the scientific community understand at the cellular level of the brain and at very broad levels of the brain.”