Mother Nature may have her own way of telling stem cells how and when to differentiate into specific cell types, but many scientists are now beginning to think that they can improve on her work to treat human disease.

A Duke University bioengineer is one of them – he believes that by using the latest engineering technologies, he may be able to come up with new therapies for such disorders as muscular dystrophy or heart disease by regenerating new cells to replace faulty or missing ones.

“Conventional wisdom has always held that once the decision was made that determines what kind of a cell a stem cell would become, it was irreversible,” said Charles Gersbach, assistant professor of biomedical engineering at Duke’s Pratt School of Engineering. “Now, all that is out the window. We’re beginning to see that we can change the fate of cells whose fate would seem to have been sealed.” 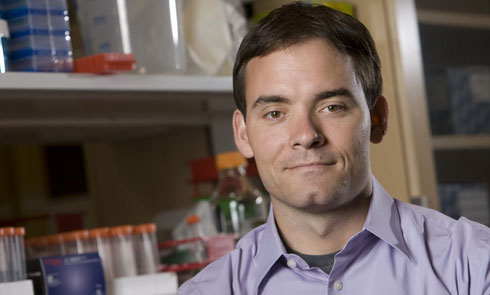 Gersbach uses genetic reprogramming to generate various cell sources for the growing field of regenerative medicine.  This involves reprogramming the gene expression of easily accessible cells, such as a patient’s own skin cells, to create new cell types, such as those that make muscle, bone, cartilage, blood vessels, or heart tissue.

The novel approach Gersbach uses has won him a $1.5 million, five-year, New Innovator Award from the National Institutes of Health. These awards are different from most in that they go to young investigators with “big picture” ideas, rather than to more established researchers with large labs and many publications.

“These awards are intended to catalyze giant leaps forward for any area of biomedical research, allowing investigators to go in entirely new directions,” said James M. Anderson, director of the Division of Program Coordination, Planning and Strategic Initiatives for the NIH.  “The award programs reinvigorate the biomedical work force by providing unique opportunities to conduct research that is neither incremental nor conventional.”

In the past few years, scientists have figured out how to turn a cell whose fate has already been determined into a cell with the ability to differentiate into another type, much like a stem cell. For example, Gersbach’s lab has taken skeletal muscle cells, genetically engineered them to activate a bone-related gene, which led to conversion of these muscle cells into bone-forming cells which could be used to regenerate bone tissue.

“We are currently expanding these studies to develop robust methods for genetic reprogramming of cell types that can be used to regenerate a variety of tissues,” Gersbach said. “Regenerative medicine is emerging as a promising approach to repairing diseased or damaged tissues.  This strategy uses living cells to regenerate tissues, in contrast to non-biologic tissue substitutes made from plastics, metals, ceramics, electronics, or other materials”