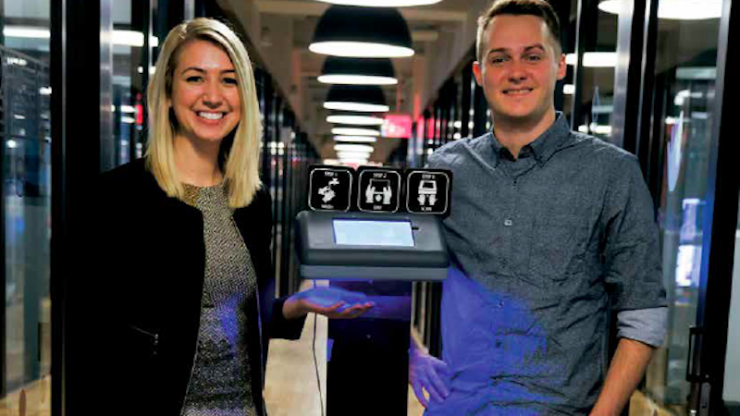 Christine Schindler and Dutch Waanders (both BME ‘15) at the PathSpot offices. Photos by Yunghi Kim

Romaine lettuce. Ground beef. Eggs. Chicken. Turkey. The list of foodborne illness outbreaks in 2018 was so long it mirrored a grocery list and made eating some of your favorite meals seem like a risky activity. The Centers for Disease Control and Prevention estimates that more than 48 million people get sick, 128,000 are hospitalized, and 3,000 die from foodborne diseases each year in the United States. Despite the prevalence of foodborne pathogens, there isn’t an easy way to make sure they don’t pass from people to produce.

After watching what felt like endless newscasts announcing a new foodborne outbreak, Chris-tine Schindler and Dutch Waanders decided they wanted to do something to address the issue.

Both 2015 graduates of Duke University’s Department of Biomedical Engineering, Schindler and Waanders recognized that their combined experience in entrepreneurship, global health and engineering gave them a unique perspective on the problem. They wanted to create an easy-to-use device that could detect signs of pathogens like salmonella, E. coli or listeria in a real-world setting.

“We looked to see if there was a company out there already working on this, but we couldn’t find anyone doing instantaneous detection of pathogens in food service or in the restaurant space,” says Schindler.

Using electronic components bought at a RadioShack going-out-of-business sale, the duo created a hand-dryer-sized device that uses spectroscopy to scan people’s hands for food-borne contaminants. As light from the device bounces off hands and back into the camera, a proprietary algorithm compares the wave-lengths of the reflected light to those of different indicators for foodborne pathogens including listeria, salmonella, hepatitis A and norovirus. If no contaminants are detected, the device flashes a green light and employees are cleared to handle food. 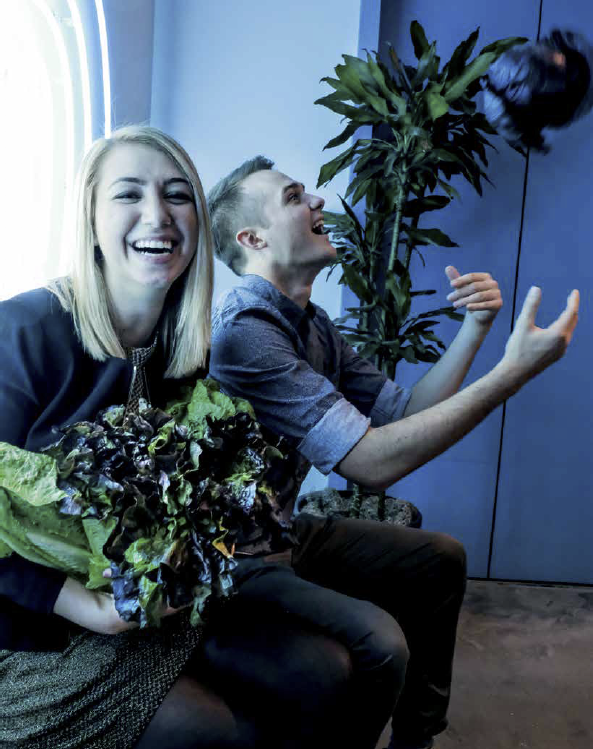 “We went to restaurants door to door to ask them about the issue and what they needed in their facilities,” says Waanders. “People said that they’ve waited for a device like this for ten years. There was a ton of enthusiasm, so Christine and I quit our jobs and started working full time on PathSpot.”

In tests in restaurants in Durham, New York City and Detroit, the researchers observed that each device was used an average of 170 times each week, and an average of 20 percent of scans detected some form of contamination in the first week.

Although PathSpot is the team’s first startup to specifically tackle a health-related issue, Schindler and Waanders gained valuable entrepreneurial ex-perience when launching their national non-profit, Girls Engineering Change. Founded by Schindler in 2012 during her sophomore year at Duke, GEC was created to help young girls realize the difference engineering can make in the world by giving them hands-on de-sign experience.

“We bring girls to college campuses and teach them how to build and assemble things that are then donated throughout the world so they can see the real impact of engineering,” says Schindler. “For example, we have them make solar-powered USB chargers that we’ll donate to disaster-relief settings. These are simple products, but they can make a big difference to people in need.”

As the organization grew and chapters were established across the nation, it was even recognized by President Bill Clinton. Although Schindler and Waanders have handed over the reins to a new team of leaders, they credit their time with Girls Engineering Change for showing them how they could use their engineering education to address unmet needs.

Today, the pair is working to expand PathSpot.

“The education we received at Duke really pre-pared us to use our engineering skills to help people, and that’s why we’ve pursued the projects we have,” says Schindler. “Our engineering skills can be translated to so many different fields and in so many different ways, and I’m happy that we can serve both consumers and business owners through PathSpot.”