Kam Leong, the James B. Duke professor of biomedical engineering at Duke University’s Pratt School of Engineering, has been elected to the National Academy of Engineering (NAE)—one of the highest professional distinctions for engineers. 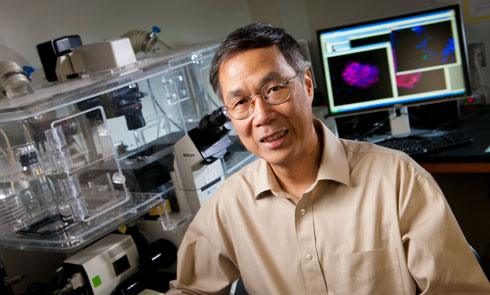 Leong, who was cited for “contributions to engineered drug delivery and non-viral mediated gene delivery,” is one of 69 new members selected to join the academy in 2013.

“Kam has been a leader for years in engineering better medicines, which the NAE has identified as one of the most significant global challenges for the 21st century,” said Tom Katsouleas, professor and Vinik dean of the Pratt School of Engineering. “His work designing new methods of drug delivery has been directly responsible for extending thousands of lives.”

Leong is best known for developing innovative treatments for brain cancer. His work has produced tumor vaccines and other therapies that significantly improve patients’ life expectancy. Breaking new ground in biomedical engineering, he also expanded the use of nanotechnology in medicine, creating more efficient drug-delivery systems that can deliver therapeutic nanoparticles to previously unreachable parts of the body.

“I am honored and humbled to be chosen from a field of such deserving candidates,” said Leong, who joined the Duke faculty in 2006 with joint appointments in the schools of engineering and medicine. “This is also a credit to my first-rate lab members, students, post-docs, and collaborators. I greatly appreciate being able to work in the right place at the right time with the right people.”

Leong was instrumental in the development of the brain cancer treatment Gliadel, a controlled-release therapy that delivers the drug carmustine directly into a tumor site after surgical removal. The treatment is based on research Leong conducted as a post-doctoral fellow at the Massachusetts Institute of Technology (MIT), where he and Robert Langer, Leong’s post-doctoral mentor and David H. Koch Institute professor of chemical engineering, developed biodegradable polyanhydrides as a novel drug carrier—only the second class of biodegradable polymers approved by the Food and Drug Administration.

“To see something like Gliadel, perhaps not creating a cure, but prolonging the patient’s survival, is tremendously satisfying,” Leong said. “I am passionate about this field because of the opportunities to impact human health—and the potential of nanomedicine is particularly exciting. By better understanding the interactions of cells and nanoparticles, we can discover new ways to deliver gene and drug therapies. It can also lead to better strategies to reprogram cells for regenerative medicine.”

While at Johns Hopkins University, where he served on the faculty from 1986 to 2006, Leong developed a controlled-release tumor vaccine that uses paraffin-embedded tissue fragments made from a patient’s own cancer and immunoadjuvants. This personalized “self-vaccine” causes no side effects. Known as AFTVac (autologous formalin-fixed tumor vaccine), the technology is licensed to Cell-Medicine, Inc. in Japan, and has treated more than 300 Japanese patients with glioblastoma multiforme tumors since 2007.

Although many scientists had believed it impossible, Leong invented a way to use gene carriers to deliver nanoparticles of DNA by mouth. Strategies using this gene-therapy technique have already shown beneficial effects in animal models of peanut allergy and hemophilia.

“This technology has the potential to realize the ultimate goal of gene therapy – to apply a gene as a drug,” Langer said. “It will have a profound impact on patients suffering from hemophilia and other genetic diseases that require protein replacement therapy.”

While currently studied only in mice, the technology could potentially lead to patients taking a “gene pill,” possibly diminishing or staving off negative disease symptoms, Langer said.

In addition to this research, Leong is currently perfecting the transdifferentiation of adult stem cells directly into new, different types of cells, such as neurons. While other scientists have done this using viruses to deliver the genes that trigger the cellular transformation, Leong’s group recently became the first to demonstrate the possibility of using nanoparticles for non-viral gene delivery—thus improving the safety of the technique. The work is still nascent, he said, but the ultimate goal is to one day enable patients to grow their own new cells, such as cardiac cells to treat damage from heart attacks or neurons to treat Parkinson’s or Alzheimer’s diseases.

“It would be difficult to overstate the significance of Dr. Leong’s contributions in his field,” said Robert A. Blouin, dean of the University of North Carolina at Chapel Hill Eshelman School of Pharmacy. “His work in biomaterials and nanoparticles is leading to new and innovative systems that could revolutionize the way we deliver medicines to the proper targets within the body.”

On top of his research efforts, Leong has made a significant impact as a professor and colleague, said Craig Henriquez, professor and chair of biomedical engineering at Duke.

“Beyond his significant contributions to the field of biomedical engineering, he has been an outstanding mentor to students and young faculty,” he said. “He is always willing to offer advice and guidance. He is an exemplary faculty member.”

“Induction into the National Academy of Engineering is one of the highest honors any engineer can receive,” Katsouleas said. “It reflects extraordinary contributions to the profession as recognized by other academicians. I can think of no one more deserving than Kam Leong for this honor.”