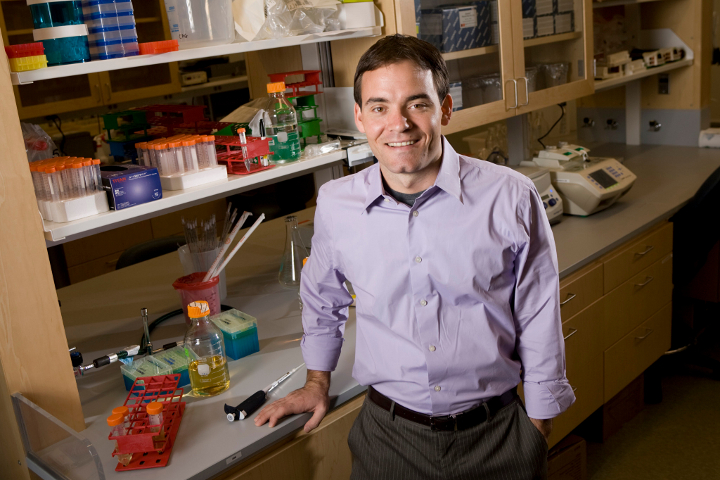 In 2006, Shinya Yamanaka, a professor at the Institute for Frontier Medical Sciences at Kyoto University at the time, discovered how to revert adult connective tissue cells, called fibroblasts, back into immature stem cells that could differentiate into any cell type. These so-called induced pluripotent stem cells won Yamanaka the Nobel Prize in medicine just six years later for their promise in research and medicine.

Since then, researchers have discovered other ways to convert cells between different types. This is mostly done by introducing many extra copies of “master switch” genes that produce proteins that turn on entire genetic networks responsible for producing a particular cell type.

Now, researchers at Duke University have developed a strategy that avoids the need for the extra gene copies. Instead, a modification of the CRISPR genetic engineering technique is used to directly turn on the natural copies already present in the genome.

These early results indicate that the newly converted neuronal cells show a more complete and persistent conversion than the method where new genes are permanently added to the genome. These cells could be used for modeling neurological disorders, discovering new therapeutics, developing personalized medicines and, perhaps in the future, implementing cell therapy.

The study was published on August 11, 2016, in the journal Cell Stem Cell.

“This technique has many applications for science and medicine. For example, we might have a general idea of how most people’s neurons will respond to a drug, but we don’t know how your particular neurons with your particular genetics will respond,” said Charles Gersbach, the Rooney Family Associate Professor of Biomedical Engineering and director for the Center for Biomolecular and Tissue Engineering at Duke. “Taking biopsies of your brain to test your neurons is not an option. But if we could take a skin cell from your arm, turn it into a neuron, and then treat it with various drug combinations, we could determine an optimal personalized therapy.”

“The challenge is efficiently generating neurons that are stable and have a genetic programming that looks like your real neurons,” says Joshua Black, the graduate student in Gersbach’s lab who led the work. “That has been a major obstacle in this area.”

In the 1950s, Professor Conrad Waddington, a British developmental biologist who laid the foundations for developmental biology, suggested that immature stem cells differentiating into specific types of adult cells can be thought of as rolling down the side of a ridged mountain into one of many valleys. With each path a cell takes down a particular slope, its options for its final destination become more limited.

If you want to change that destination, one option is to push the cell vertically back up the mountain—that’s the idea behind reprogramming cells to be induced pluripotent stem cells. Another option is to push it horizontally up and over a hill and directly into another valley.

“If you have the ability to specifically turn on all the neuron genes, maybe you don’t have to go back up the hill,” said Gersbach.

Previous methods have accomplished this by introducing viruses that inject extra copies of genes to produce a large number of proteins called master transcription factors. Unique to each cell type, these proteins bind to thousands of places in the genome, turning on that cell type’s particular gene network. This method, however, has some drawbacks.

“Rather than using a virus to permanently introduce new copies of existing genes, it would be desirable to provide a temporary signal that changes the cell type in a stable way,” said Black. “However, doing so in an efficient manner might require making very specific changes to the genetic program of the cell.”

In the new study, Black, Gersbach, and colleagues used CRISPR to precisely activate the three genes that naturally produce the master transcription factors that control the neuronal gene network, rather than having a virus introduce extra copies of those genes.

CRISPR is a modified version of a bacterial defense system that targets and slices apart the DNA of familiar invading viruses. In this case, however, the system has been tweaked so that no slicing is involved. Instead, the machinery that identifies specific stretches of DNA has been left intact, and it has been hitched to a gene activator.

The CRISPR system was administered to mouse fibroblasts in the laboratory. The tests showed that, once activated by CRISPR, the three neuronal master transcription factor genes robustly activated neuronal genes. This caused the fibroblasts to conduct electrical signals—a hallmark of neuronal cells. And even after the CRISPR activators went away, the cells retained their neuronal properties.

“When blasting cells with master transcription factors made by viruses, it’s possible to make cells that behave like neurons,” said Gersbach. “But if they truly have become autonomously functioning neurons, then they shouldn’t require the continuous presence of that external stimulus.”

The experiments showed that the new CRISPR technique produced neuronal cells with an epigenetic program at the target genes matching the neuronal markings naturally found in mouse brain tissue.

“The method that introduces extra genetic copies with the virus produces a lot of the transcription factors, but very little is being made from the native copies of these genes,” explained Black. “In contrast, the CRISPR approach isn’t making as many transcription factors overall, but they’re all being produced from the normal chromosomal position, which is a powerful difference since they are stably activated. We’re flipping the epigenetic switch to convert cell types rather than driving them to do so synthetically.”

The next steps, according to Black, are to extend the method to human cells, raise the efficiency of the technique and try to clear other epigenetic hurdles so that it could be applied to model particular diseases.

“In the future, you can imagine making neurons and implanting them in the brain to treat Parkinson’s disease or other neurodegenerative conditions,” said Gersbach. “But even if we don’t get that far, you can do a lot with these in the lab to help develop better therapies.”