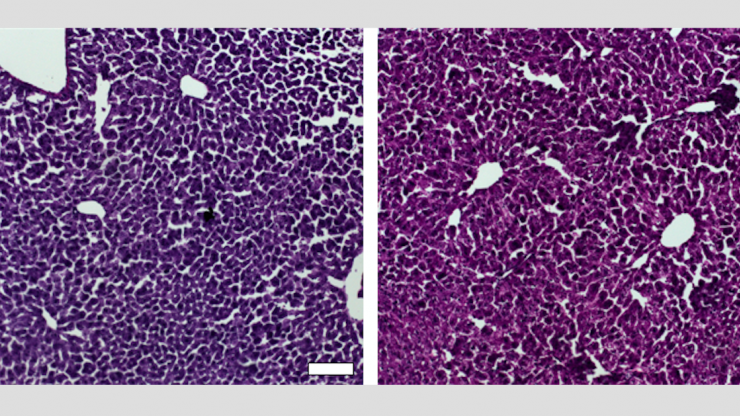 Biomedical engineers at Duke University have used a CRISPR/Cas9 genetic engineering technique to turn off a gene that regulates cholesterol levels in adult mice, leading to reduced blood cholesterol levels and gene repression lasting for six months after a single treatment. This marks the first time researchers have delivered CRISPR/Cas9 repressors for targeted therapeutic gene silencing in adult animal models.

The study appeared online in Nature Communications on April 26.

The CRISPR/Cas9 system is based on an antiviral defense mechanism in bacteria in which the Cas9 enzyme recognizes the viral DNA sequences of previous infections and cuts up invading DNA during re-infection. Researchers have engineered the CRISPR/Cas9 system to not only locate and cut specific sequences of DNA, but to also turn on or off the expression of targeted genes without making permanent changes to the DNA sequence. While this CRISPR/Cas9 repressor technique has emerged as a robust tool for disrupting gene regulation in cell culture models, it had not yet been adapted for delivery to adult animals for applications such as gene therapy.

In their most recent study, Charles Gersbach, the Rooney Family Associate Professor of Biomedical Engineering at Duke, and members of his laboratory develop an approach to efficiently package and deliver the CRISPR/Cas9 repressor system to mice. They tested their delivery system by silencing Pcsk9, a gene that regulates cholesterol levels. While several drugs have been developed to treat high cholesterol and cardiovascular disease by blocking the activity of Pcsk9, this new approach would prevent Pcsk9 from being made.

“We previously used these same types of tools to turn genes on and off in cultured cells, and we wanted to see if we could also deliver them to animal models with an approach that is relevant for gene therapy,” Gersbach said. “We wanted to change the genes in a way that would have a therapeutic outcome, and Pcsk9 is a useful proof-of-concept given its role regulating cholesterol levels, which in turn affect health issues like heart disease.”

To test the targeted Pcsk9 repressor in an adult animal, the team opted to use adeno-associated viral (AAV) vectors—small viruses that have been engineered to target a variety of tissue types in human gene therapy clinical trials. Due to the vector’s small cargo limit, the team couldn’t use the common Cas9 enzyme from Streptococcus pyogenes. Instead, they opted to use a smaller Cas9 from Staphylococcus aureus. They also deactivated the DNA cutting function of Cas9, creating a “dead” version of the enzyme, dCas9, that binds to but does not cut the targeted DNA sequence.

The dCas9 can be combined with a KRAB protein that silences gene expression, creating a CRISPR/Cas9 repressor that blocks transcription, reduces chromatin accessibility, and silences gene expression without altering the underlying DNA sequence. Using an AAV vector to deliver CRISPR/Cas9-based repressors to the mouse liver, the researchers reduced Pcsk9 and cholesterol levels in treated mice.

While the experiment was successful, the researchers also observed release of liver enzymes into the blood only in treatments that included Cas9. While these liver enzyme levels remained below a critical threshold and normalized over time, their elevated levels indicated that the therapy potentially caused immune responses in the liver where the virus and Cas9 enzyme accumulate, raising questions about the efficacy of multiple injections.

“One of the interesting things we found looked like an immune response against the Cas9 protein,” said Pratiksha Thakore, the PhD student who led the work in Gersbach’s lab. “Following injection, we saw that levels of our target gene, Pcsk9, were reduced, but we also observed increases in expression of many immune cell genes , which indicates that immune cells were infiltrating the liver after we delivered Cas9 to the mice. Gaining a better understanding of this immune response and how to modulate it will be important for using Cas9 technologies for therapies.”

As researchers develop new ways to use the CRISPR/Cas9 for therapy and research, more information is emerging on how the immune system of living organisms responds to delivery of CRISPR/Cas9 system. Because the Cas9 enzyme is derived from bacteria, the immune system may recognize it as a foreign protein from an invading organism and mount a response. There is also concern that potential patients for a CRISPR/Cas9-based therapy may already be primed to harbor immune responses against these systems, as the Cas9 enzymes most commonly used in research come from common bacteria to which humans are routinely exposed.

“The field is just starting to look at this, and it’s clear that immune response is an important issue,” said Gersbach. “Although we did see an immune response in the mice when we administered Cas9, the levels of liver enzymes in the serum seemed to mitigate over time without any intervention, and the effect of Pcsk9 repression was sustained regardless.”

As they continue the research, Gersbach and his collaborators hope to gather more information to better understand the immune response against Cas9 and stability of epigenetic modulation.

“There are still lots of things for us to explore with this approach,” said Thakore. “CRISPR/Cas9 tools have worked so well in cell culture models that it’s exciting to apply them more in vivo, especially when we’re examining important therapeutic targets and using delivery vehicles that would be relevant to treating human diseases.”