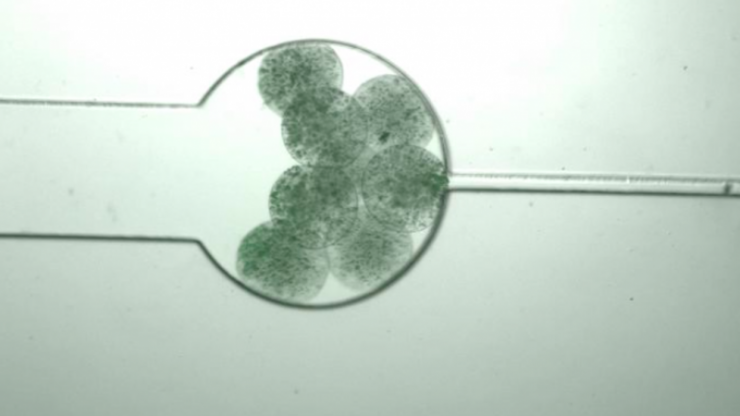 ‘Swarmbots,’ living cells engineered to produce monomer molecules, grow until they sense their population density has reached a certain level, whereupon they burst open, allowing the monomers to mingle and self-assemble into a composite polymer.

Biomedical engineers at Duke University have demonstrated that a class of interwoven composite materials called semi-interpenetrating polymer networks (sIPNs) can be produced by living cells. The approach could make these versatile materials more biologically compatible for biomedical applications such as time-delayed drug delivery systems.

The research appears online on June 8 in the journal Nature Communications.

The concept of sIPNs has been around for more than 100 years and has been used in automotive parts, medical devices, molding compounds and engineering plastics. The general idea is for one or more polymers to assemble around another polymer scaffold in such a way that they become interlocked. Even though the polymers are not chemically bonded, they cannot be pulled apart and form a new material with properties greater than the simple sum of its parts.

Traditional methods for manufacturing sIPNs typically involve producing the constituent parts called monomers and mixing them together in the right chemical conditions to control their assembly into large networks in a process called polymerization.

“When it works, it’s a fantastic platform that can incorporate different functionalities into the self-assembled layer for biomedical or environmental applications,” said Lingchong You, professor of biomedical engineering at Duke. “But the process is often not as biocompatible as you might want. So we thought why not use living cells to synthesize the second layer to make it as biocompatible as possible?”

In the new paper, Zhuojun Dai, a former postdoc in the You lab who is now an associate professor at the Shenzhen Institute of Synthetic Biology, uses a platform that the lab has been developing for several years called “swarmbots” to do just that.

The swarmbots are living cells that are programmed to produce biological molecules within their walls and then explode once their population reaches a certain density. In this case, they’re programmed to produce monomers called elastin-like polypeptides (ELPs) fused to functional features called SpyTag and SpyCatcher. These two molecular structures form a lock-and-key system, allowing the ELPs to self-assemble into a polymer chain when mixed. As they grow, these polymers entangle themselves with the polymeric microcapsules containing the cells to form sIPNs.

Each monomer can contain multiple SpyTags or SpyCatchers and can also be fused to proteins that generate a readout or have specific functions. It’s sort of like making a chain-link fence out of many tiny charm bracelets that have room for clasps and charms.

The researchers first program the cells to fill this accessorizable feature with a fluorescent protein to prove that the system can lock them into place. After that successful demonstration, they turn their attention to engineering a useful drug delivery system with their new invention.

“You could replace the fluorescent marker with anything that has a function you want to feature,” said You. “We decided to touch on antibiotics because it’s one of the other focuses of our lab.”

Beta-lactam antibiotics, such as penicillin and its derivatives, are some of the most commonly used antibiotics in the world. They’re also often overused and can have negative effects such as destroying the natural microbiome that lives within our guts.

To demonstrate one way in which their new cell-built sIPNs could be useful, the researchers fill the accessorizable spot with beta-lactamase, which can degrade beta-lactam antibiotics. By injecting the newly functionalized sIPNs into mice, the researchers showed the platform could slowly release the otherwise short-lived protective molecule to help the mice’s gut microbiomes ward off negative side effects from the antibiotics.

“Nobody has used living cells as a factory to produce monomers in real-time for sIPNs before,” said You. “The proof-of-principle demonstration shows that, not only can we fabricate these types of functional materials with live cells, but they can exhibit medically relevant functions.”