Bringing a Global Perspective to the Pharmaceutical Industry

From undergraduate research to corporate career, Bianca Bracht is on a mission to increase access to health care 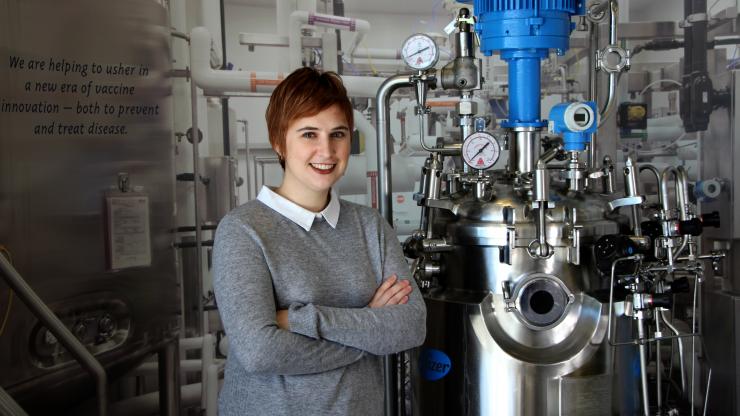 Most of the grocery stores in the United States have a designated pharmacy, where relief from a persistent cough or fever can easily be purchased along with a loaf of bread. This ease of access has made it easy to forget that nearly two billion people across the globe don’t have consistent access to medicine, whether it’s for the treatment of multidrug-resistant tuberculosis or pills that can alleviate a painful earache.

With minors in global health, chemistry and Chinese, Bianca Bracht used her global perspective to explore this problem during her time as an undergraduate student in Duke University’s Department of Biomedical Engineering.

“I knew I wanted a role that could bridge technology and health care to make a positive impact,” says Bracht. “Initially I thought that meant that I’d pursue a career in the medical device industry, but my time in Duke BME also showed me that there was a real need for engineers in pharmaceuticals, especially in areas where there’s a lack of access to care and affordable drugs.”

This came into focus during her junior year, when she began to work on the Pratt Pouch. Created by Professor of the Practice Robert Malkin and his team, the Pratt Pouch is a ketchup-like packet containing antiretroviral drugs that can be administered to newborns to prevent mother-to-child transmission of HIV.

The innovative packaging preserves pre-measured doses of medicine for up to a year without refrigeration, making it ideal for use in resource-limited areas. Bracht worked on the Pratt Pouch as a Grand Challenge Scholar at Duke, testing the packaging and determining what other kinds of medications could be safely preserved in the pouch.

“My work on the Pratt Pouch inspired me to pursue work in the pharmaceutical industry,” says Bracht. “The Pratt Pouch obviously focuses on more low-resource settings, but there is a lot of opportunity within the industry to make small changes, like new ways to store medicine, that have a large impact on patients worldwide. My goal was to increase access to healthcare globally, and I looked for roles that fit into that category.”

After graduating from Duke in 2015, Bracht accepted a job at Pfizer, working at their Rocky Mount plant in North Carolina for nine months before moving to India to help start up operations at a new site. These roles were in the generic Sterile Injectable drug business, and involved exploring ways to improve manufacturing practices through production advancements and standardization. Now, Bracht is back in North Carolina, this time in Pfizer’s Biotechnology business focusing on their ongoing investment to build a gene therapy manufacturing site.

“It’s exciting because this is the type of work that will help people access treatments that may not previously been available outside of a lab—it’s a different way of looking at my goal of ‘increasing access’,” she says. “I’m lucky because I’ve had a wide variety of career experiences in a short amount of time. At the end of the day we make medicine to help people, and I’m very passionate about what I do.”