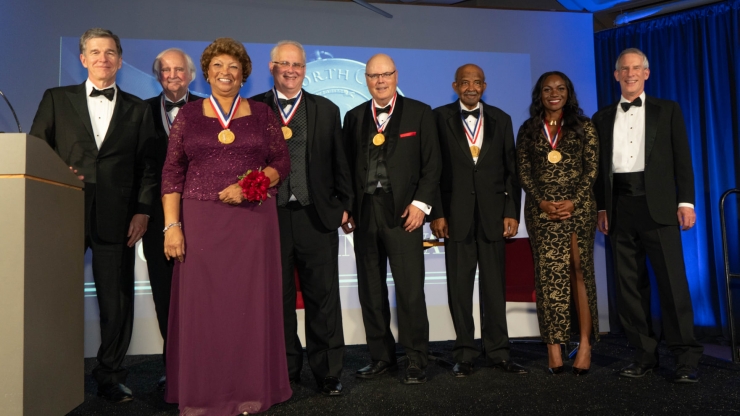 Blake Wilson (second to left) poses with the other winners of the 2021 North Carolina Award. Credit: NC Department of Natural and Cultural Resources

Blake S. Wilson, a Duke Engineering alumnus and faculty member who is one of the lead inventors of the cochlear implant, received the North Carolina Award November 18 in recognition for his significant scientific contributions to the state.

Created in 1961 by the North Carolina General Assembly, the prestigious award recognizes significant contributions to the state and nation in the fields of fine arts, literature, public service and science. The North Carolina award is the state’s highest civilian honor, and Wilson was one of just nine individuals to receive the combined awards for 2020 and 2021.

More than 36 million adults in the United States report issues with their hearing, with issues ranging from tinnitus to complete deafness. Cochlear implants enable people to regain some, if not most, of their hearing by translating sounds into electrical signals that the brain can interpret and send directly to the auditory nerve. This new pathway bypasses damaged cilia cells in the inner ear that contribute to hearing loss. Today, most users of cochlear implants use the telephone or their cell phones routinely, even for conversations with previously unfamiliar persons and even for conversations with unpredictable and changing topics.

Wilson invented of many of the sound-processing strategies used in modern cochlear implants––most significantly the “continuous interleaved sampling” system. This technique made it easier for cochlear implant recipients to better understand words and sentences, making the implants significantly more effective than previous iterations. To date, Wilson’s research has helped restore hearing for more than one million people worldwide.

Wilson was elected to the National Academy of Engineering (NAE) in 2017 in recognition for his work, and he and his colleagues also received the 2015 NAE Fritz J. and Dolores H. Russ Prize, which is considered the top prize in the world for bioengineering. He also received the prestigious Lasker Award in 2013, which is given to researchers who have made significant contributions to medical science and is second only to the Nobel Prize in Physiology or Medicine for recognizing advances in those fields.

With both bachelor’s and doctoral degrees from Duke Engineering, Wilson is currently the director of the Duke Hearing Center, and he also serves as an adjunct or consulting professor in biomedical engineering, electrical and computer engineering and  head and neck surgery & communication sciences at Duke.

“Through their extraordinary accomplishments, these individuals have enriched North Carolina and our nation,” Reid Wilson, secretary of the N.C. Department of Natural and Cultural Resources, said in a press release. “Each of them has enhanced the lives of North Carolinians through their lasting achievements in the arts, sciences and public service.”

Governor Roy Cooper presented Wilson and the other distinguished North Carolinians with their awards on Thursday, November 18, 2021, at the North Carolina Museum of Art.