For the first time, molecular events below the skin can now not only be seen in three dimensions, but in their true color.

The new method developed by Duke University bioengineers detects and shows in vivid shades of red the levels of hemoglobin being carried by blood vessels, even the tiniest ones whose diameter can be as narrow as a few red blood cells.  Other molecules can also be visualized, including medical dyes introduced to trace important biological mechanisms.

The developers of the new technique believe it could have significant implications both clinically and in basic science laboratories by providing new perspectives of basic biological functions. 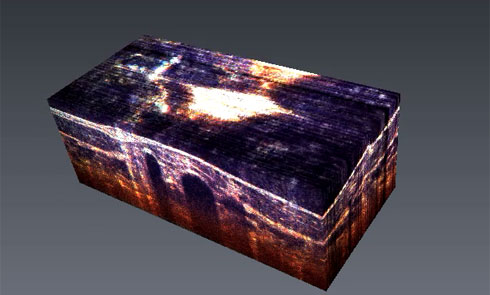 To achieve this colorful view below the skin, the bioengineers modified a technique that has been used by physicians and researchers to provide cross-sectional images of biological tissues such as the eye and gastrointestinal tract. The technique, known as optical coherence tomography (OCT), uses scattered light or optical echoes to reconstruct the structure underneath a tissue’s surface. As such, it is often referred to as the optical equivalent of ultrasound.

“While with conventional OCT we are able to see structures such and blood vessels and even capillaries, the main drawback is that it doesn’t provide some basic functional information, including absorption which also gives the true color of the structures,” said Francisco Robles, graduate student in the laboratory of Adam Wax, Theodore Kennedy associate professor of biomedical engineering at Duke’s Pratt School of Engineering.

The results of the Duke research, supported by the National Institutes of Health, were published online by Nature Photonics.

“We expect that this new technique will have several important applications, such as visualizing tumor development processes like angiogenesis and oxygen deprivation,” Wax said. “It also could help in detecting disease of the eye, especially those that impact the tiny vessels of the eye. It may have effectiveness in monitoring the delivery and effectiveness of drugs.”

To achieve this ability to see true colors, Robles developed a novel method for collecting and interpreting the information provided by the OCT procedure to simultaneously include information regarding the wavelengths or colors of light.

Blood, or more specifically the hemoglobin being carried by red blood cells, provides the absorption that makes the process work. In a sense, the hemoglobin, which caries oxygen, acts as a “natural” contrast agent because of its absorption properties, which give blood its red color. Many disorders can be characterized by the levels of blood oxygen, a characteristic that can be detected in true shades of red by the new technique.

“The level of hemoglobin in tissue is very important,” Robles said. “The additional information we can collect enables us to see subtle shifts in hemoglobin levels, as well as changes in how the hemoglobin is being distributed in local tissues.”

The Duke team tested the new system in living mice. When conventional OCT was employed, certain structures – such as muscle and vessels – could be observed. However, these images were black and white and couldn’t reveal information about the tissue function.

“With the new system, we observed a wealth of information we couldn’t before,” Robles said. “The muscle layer at the surface was relatively colorless because of low hemoglobin levels. However, as the light continued through the blood vessels below, a red shift in color was clear. To our knowledge, these are the first micron-scale cross-sectional images of living tissue in true color.”

The proprietary rights to the OCT technology are owned by Oncoscope, Inc., a Durham-based company founded in 2006 by Wax based on the Duke technology. Wax has a financial interest in the company.

Other Duke members of the team were Christy Wilson and Gerald Grant.