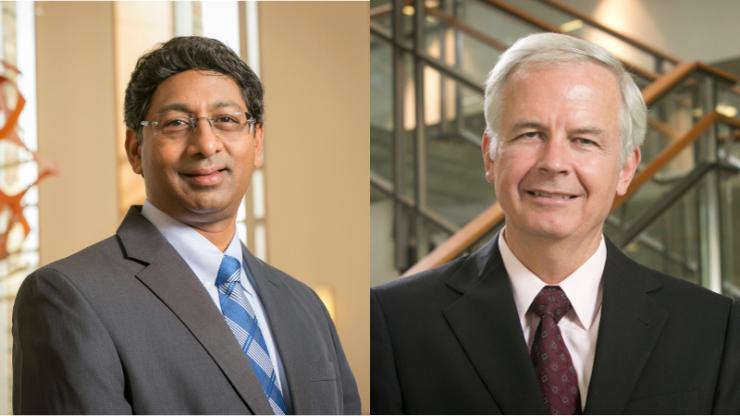 Ravi Bellamkonda and George Truskey, respectively, Vinik Dean and Senior Associate Dean of the Pratt School of Engineering at Duke University, have been named fellows of the International Academy of Medical and Biological Engineering (IAMBE).

IAMBE is made up of fellows who are recognized for their outstanding contributions to the profession of medical and biological engineering. Nominated and elected by all active fellows of the academy, the 2019 class features 24 distinguished new members.

Bellamkonda, also a professor of biomedical engineering, conducts research that explores the interplay of biomaterials and the nervous system for neural interfaces, nerve repair and brain tumor therapy. One of his inventions, a biomedical tool that tricks aggressive brain tumors such as glioblastoma into migrating into an external container rather than throughout the brain, was recently designated a “Breakthrough Device” by the U.S. Food and Drug Administration. In another research project, Bellamkonda is genetically rewiring salmonella to seek out glioblastomas and push them into self-destructing.

Truskey, the R. Eugene and Susie E. Goodson Professor of Biomedical Engineering, focuses his research efforts on the effect of physical forces on the function of vascular cells and skeletal muscle, cell adhesion, and the design of engineered tissues. Some of his recent work includes creating a vascular model using human cells of the rare aging disease progeria (https://pratt.duke.edu/about/news/progeria-blood-vessels ) and engineering tissue chips that model atherosclerosis and muscle dysfunction in rheumatoid arthritis to examine how simulated exercise can reduce the impact of inflammation.

The new class of IAMBE Fellows will be inducted during a special session, in conjunction with the Carnegie Mellon Forum on Biomedical Engineering to be held on September 20, 2019 in Pittsburgh, Pennsylvania.